Home » Articles From The Community » A Whaling Family 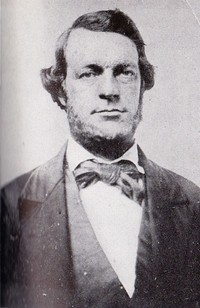 Wethersfield was closely connected with maritime affairs in the early days, but it was hardly to be expected that it would be involved with whaling.  True, the first ship built in Connecticut at Wethersfield; the Tryall, was commissioned for whaling, the first whaler in New England.  But this was not the kind of whaling that was common in the 1800’s when ships went on voyages of many years.  [According to current WHS records The Tryall was not a whaler but was used for transporting shooks (barrel staves) to and from the West Indies.]

A boy born in Wethersfield probably went to sea, as many did, as a young man.  He was fortunate enough to acquire an interest in a whale ship and eventually to command such a ship.   This was Captain Thomas Williams, one of the youngest captains of the whaling fleet in the 1860’s.  He was married to a Wethersfield woman by the name of Eliza Azelia Griswold and she accompanied him on a three-year’s voyage from 1858 to 1861 in the Pacific Ocean.  She kept a diary which her grandson, Harold Williams, published as the book “One Whaling Family”.  This gives a very different account of whaling than is commonly found in our stories told by novelists. 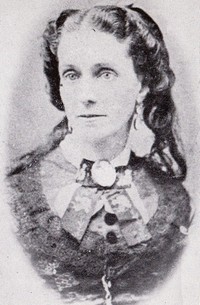 Papers still exist that display the great care that was necessary to prepare for such a voyage.  There must be enough barrel shooks to be made into barrels to hold a full cargo of whale oil; sometimes extra oil was shipped back by less fortunate ships.  For the crew and the ship itself provisions, clothing for the crew, extra sails and material for repairs of all kinds must be carried.  All supplies had to be packed in barrels and marked so they could be found.  You find such items as: 120 Bbls. Flour, 132 Bbls. Baked into bread, 126 Bbls. Extra & Prime Mess Beef, 135 Bbls. Prime Pork, 800 lbs. Codfish, 500 lbs. Ham, 1500 lbs. Butter, 1400 lbs. Sugar, 1200 lbs. Coffee, besides countless smaller items of food, a considerable quantity of which was in cans at that time.  New and old sails was a considerable item, as was many coils of cordage in all sizes.  Barrels of oil numbered well over 1,000.  There had to be iron hoops and heads and bottoms for these barrels, a rather complex matter as the barrels could not be obtained except in a variety of sizes.

It was not unusual for a whaling captain to take his wife along, although it must have been a somewhat tedious voyage for her.  She wrote, “Now I am in the place that is to be my home, possibly for 3 or 4 years; but I can not make it appear to me so yet it seems so strange, so many Men and not one Woman beside myself; the little cabin that is to be all my own is quite pretty, as well as I can wish, or expect aboard a ship.  I have a rose geranium to pet, that Mrs. Fish (a relative) has been kind enough to send me, and I see there is a kitten on board.”  Day, after day the account goes on – how she became accustomed to ship life and good and bad weather and the ships sighted.  They sighted whales and captured some – how the oil was tryed out and what the whales looked like.  There was other life on board, “There has been an increase on board the Ship; we have got 8 pigs in the pen.”

Sailing from Fairhaven Mass., the square-rigger Florida has as crew Captain Thomas W. Williams of Wethersfield, Samuel B. Morgan, First Mate, also of Wethersfield, and 34 other men from nearly as many towns: from Peacham Vermont to Flagstaff, Maine.  She mentions her two brothers as being on board, but their names do not appear on the list of the crew.  None of these received any pay except as a portion of the profit when the voyage was ended.  The share varied for 1/12 to the captain to 1/250, most of the able seamen receiving 1/200.  Not all of these returned, as eight deserted and one was killed.  It was quite common in those days for a ship to return with many of the crew different than those on board at the beginning of the voyage.

The course led to the Cape Verde islands.  While their purpose was to find whales in the Pacific they kept a good watch and captured several whales in the Atlantic.  A good whale could yield some 40 barrels of oil.  The sperm whale was the most prized for they could yield from 80 to 100 barrels.  Once a whale was harpooned there was no rest for the crew until all the oil had been tryed out.  When several were caught at one time it many hours of constant toil although jobs were frequently changed.  Then followed the unpleasant job of cleaning up the deck.

After more than a month the next land was sighted in Tristan de Cunha.  In about a week they expected to round the Cape of Good Hope.  Capt. Williams was known as a “lucky” captain and he was, for at very short intervals whales were sighted and captured.  The carpenter and cooper were kept busy preparing barrels.  The next land was Tasmania and they spent some time a Montganua at the northern end of New Zealand.  She made a note that on the 14th of January “We have a fine healthy Boy, born five days before we got into port.”   They found eight ships in port and knowing the matters they had pleasant visits, both in other ships and on land.  Several of the captains had their wives with them.

Captain Williams discharged his oil to be taken back home by less fortunate skippers.  One phase of their voyage now over they must set sail for the north where they might again find whales.  During the year the whales migrated over large areas of the Pacific.  On March 11th they spoke of New Bedford whaler, the Young Hector out eighteen months and with 400 barrels of oil on board.  March 12th she wrote “We have about one hundred chickens running around the deck that my husband got from the island yesterday.”  March 15th they passed Kousgaie in the Caroline Islands.  They finally arrived in the Japan Sea after sighting many whale ships.  Many of the captains of these were old friends and they often came on board for a day.  They arrived at the harbor of Hakodate, Japan where many Japanese came on board.  The Japanese were looking at the ship’s compass when they caught sight of the baby and its mother.  “They looked at us for a long time with a great deal of curiosity.”  Japanese Officers came on board and they were also very curious about the baby.  “They crowded around him, feeling of him, and talking and laughing with him.”  This was the first white baby that the Japanese had ever seen.

They continued north until they saw ice, continually meeting and visiting with captains they knew from the New Bedford area.  Finding Russians who could speak English they learned that it was a little too early for the whales to arrive.  They then anchored along with 6 other ships in a little harbor.  They had considerable trouble with ice and had to continually change their anchorage.  They went ashore on the Siberian coast and found much to remind them of the trees and flowers at home.  Soon the whales appeared and again they had the adventures of their capture.  Every whale captured was a different experience.  No two acted alike; boats were stove in, some whales escaped and sometimes they took the whaleboats miles before giving in.  In any case there was a tedious towing operation when a whale was captured.  Rain or shine the work went on.

By October they were headed south, for the whales did not stay in one place for long.  They had a pleasant stay in the southern islands after severe gales on the way.  It was so humid that they longed for the coolness of the icy northern seas.  They touched again at New Zealand, and in every port loaded fresh fruits and vegetables.  By the first of February they again turned northward.  For two days they lay over at Guam, then a Spanish port.  Near Japan they again sighted whales and other ships from whom they sometimes got papers and news from home.  In May they sailed near the Charles W. Morgan, the ship now on display in Mystic.  By June they were back in the Okhotsk Sea, meeting many ships.  Some had found whales and some not, but Capt. Williams was lucky and found whales quite regularly.  Quantities of whalebone were obtained from the whale heads which they hoisted up to the deck of the ship.  On the 1st of November they left for the California coast.  Sailing on down to Lower California they saw no whales until Christmas Day.  Then they were with 15 ships and very busy hunting the numerous whales.  By the end of March the whales were gone and the Florida set sail for Hawaii.  They found Honolulu an excellent harbor and enjoyed the fine buildings in the city.  Back again to japan.  On May 27th there is an entry “Little Mary is three months today.”  This was the second child born on the Florida, but no mention was made of her birth.

October 1st, after capturing many whales, they again set sail for San Francisco which they safely reached on October 26, and the voyage was over.  This was only one voyage of Captain Williams.  He continued for several years based on California.  Then he returned to Wethersfield and attempted to revive industry along Two Stone Brook at several factories that he owned.  He had very little success in this, but remained here and is buried in our Ancient Burying Ground. 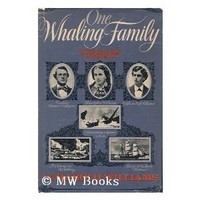 Who says that Wethersfield is a quiet place with no adventure?  Harold Williams; the author, proudly relates that his father was the boy born on the whaleship.

Go to “About the Author”.