Home » Articles From The Community » Black History in Wethersfield

From the pages of Connecticut’s 1790 census spring the names of Wethersfield’s 5 free black families.  From this same document comes the enumeration of 87 other people listed simply as slaves.  Slaves in Wethersfield?  Most assuredly.  The earliest known record of slave ownership in Wethersfield appears in the 1662 will of John Latimer.  His household included 3 slaves – a Native American and a black woman and child.

A state act of 1784 provided that a black or mulatto child born in Wethersfield or any other Connecticut town after March 1784 would only become free upon reaching his or her 25th birthday.  It was not until 1848 that all Connecticut slaves were emancipated.

We know tantalizingly little about Wethersfield’s early black residents.  What has survived only emphasizes the history that has sadly been lost.  Of the 5 free black families in the 1790 Wethersfield census, 3 were listed by just their given names: Caesar, Pomp, and Guinea.  The other 2 families were those of Quash Gomer and Jephet Will.

The town of Glastonbury, which had separated from Wethersfield in 1692, had 11 black families in 1790.  These were headed by Sawney Anderson, Shorum Bumter, Samson Fruman, Syphax Moseley, Richard Moseley, Neptune Olive, Prince Simbo, August Robberdone, Peter Allyn, Frederic Janes and Anthony.

Our limited knowledge of the possessions of one Edward Willabe of Wethersfield comes solely from a probate inventory taken upon his death in 1762.  He owned a house on ? acre of land, a feather bed, a gun, a 1-drawer chest, an iron kettle, and precious little else.

About 400 soldiers from Connecticut fought in the Continental Army during the American Revolution.  Of these, 3 soldiers from Wethersfield deserve special mention.  The honorable service of Caesar, who served with “reputation” in the Fifth Regiment during the war, was recorded in his discharge papers.  Caesar Freeman fought in Colonel Joseph Webb’s regiment from 1780-83.  Hector Williams was with General George Washington, who discharged him for health reasons at Newburgh N.Y.

London, a Wethersfield man born in Africa, achieved statewide recognition in the mid-1800s.  He was chosen by the state’s entire black population to be their governor for a year.  He received his freedom in his middle age, and moved to West Simsbury where he died in the late 1800s at about age 80. (More information on London is available on this website – please click here.) 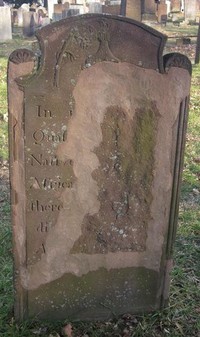 The names of the Wethersfield slaves who became free are preserved in their manumission papers.  In 1766 Quash Gomer purchased his freedom for 25 pounds from John Smith.  On November 8, 1766, Smith “fully, freely and clearly [certified] that Quash Gomer is a free Negro man, and has good, right, power, and authority to act and transact for himself, to sue and be sued, charge and discharge for himself, to do and carry on any manner of trade or business fully and clearly as tho’ he never was a slave or servant.”  Gomer’s gravestone is now almost illegible, but it was once a proud symbol of the community’s esteem for him.  Located in the Ancient Burying Ground, it reads “In Memory of Quash Gomer:  a Native of Angola in Africa, brought from there in 1748, & died June 6th 1799.  Aged 68 years.”

The gravestones of 2 other men who probably never knew freedom lie beside Gomer’s. Tenor Abro died in 1795 at age 25.  Francois, born in Africa, died in 1866 about age 55.
In 1778 Phineas Andrus unconditionally released Prince Nauqui, age 47, Nauqui had been his servant for about 40 years.  In the Town Votes is this record of the event.

“…Prince petitions and prays that he may have his Liberty and be made free – setting forth that his…service has fully and simply paid his just cost and all charges for keeping and cloathing [sp] etc. since he has been my servant.  Therefore, being convinced of his …plea, and being convinced of the injustices of the General practice of this country in holding Negro slaves during life without their consent – I do, by these presents, for myself, my heirs…in consideration of past labors and service of …Prince, release and forever discharge [him] from my service and commands whatsoever; hereby declaring [him] absolutely free to all intent and purposes, and at Liberty to transact and business of what kind…which any other free man may do, agreeable to the law of the land.”

In 1779, Sampson bought his freedom for 400 pounds in Continental currency from John Belden.  In 1781, Abigail Griswold released Bristow Miranda in exchange for 100 silver dollars from Miranda and a certificate from the Selectmen of Wethersfield accepting him as a free man.

Detailed information about the dress of Wethersfield’s slaves has survived in part only because three men and women were able to run from their bondage.  On October 3, 1774, Wethersfield ship owner and West Indian trader Samuel Boardman, 30, placed a notice in the Connecticut Courant.  He described a 25-year old man who had fled from him 12 days before as wearing white sleeveless flannel jacket, a check shirt, and a blue buff mill cap.

In 1803, former South Carolina Congressman John Rutledge spent the summer in Wethersfield.  Accompanying him was a woman named Phillis, a 35-year old servant.  Phillis was a skilled cook who also did laundry and baked cakes.  When she later managed to escape from Rutledge, her clothing included a black straw bonnet and gold earrings.  She carried with her blue, black, and red petticoats, red and white handkerchiefs, and a white checked muslin gown.  Also fleeing Rutledge was a man named Peter, an “excellent coach man [and] tolerable good cook.” 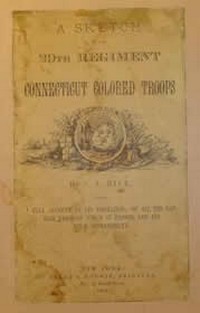 Of special note are the Civil War actions of 2 Wethersfield men who were members of the 31st United States Regiment: Sergeant Isaac B. Truitt and Corporal John Lightfoot.  After a dreadful battle in Petersburg Va., their major wrote, “I cannot speak too highly of both officers and men in this engagement. More bravery and enthusiasm I never witnessed.”

The documents which describe the contribution and circumstance of these and other black residents of early Wethersfield can be found in Town and Church records, in the Wethersfield Historical Society’s library and archives, and in other museum collections.  Although their own voices are now still, precious parts of their stories live on.