According to our mortgage dated April 13, 1977 we had acquired: 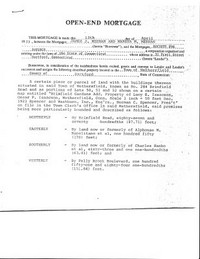 Or as described by the Town Assessor:

Neither of our Easterly and Southerly neighbors turned out as specified in the document. In fact our Eastern neighbor was a former high school classmate of Marsha’s (Wethersfield High — 1961) plus her husband and two daughters.

Since then homes have been repainted or covered with siding; additions and decks have been built; children have grown and moved away; adults have retired and relocated — or stayed; couples and families have moved in — and out; sewers have been improved; yards have been re-landscaped; new trees have been planted, old ones cut down while the survivors have increased dramatically in height; and neighbors have been born while others have died — two of them good friends. Still the general character and look of the neighborhood is pretty much the same as it was on our April 1977 closing date.

We bought the house from Mary Ellen and Tom Willsey who had purchased it one and one half years earlier from Louise and George Burns. Mr. Burns was apparently extremely well known around town as evidenced by several conversations that I had similar to one at Premier Dry Cleaners shortly after we had moved in to 284 Brimfield Road. As I was giving my address the person waiting on me said without hesitation, “Oh, George Burns’ house.”

We never met Mr. Burns but several years ago his son did stop by our house, identified himself, and asked to take a quick walk-through of his old residence. It still being the pre-9/11 trusting world of the twentieth century we allowed him access and after about a five-minute tour he thanked us and left.

Shortly after we moved in a man walked into our yard while I was doing lawn work and introduced himself as Ed Kenyon, the initial owner and the person from whom George Burns purchased.

That was pretty much the extent of my neighborhood knowledge when I decided to undertake this little historical project.

I also had a few questions.

* Why is it called Folly Brook “Boulevard” rather than “Road” or “Street”?

* What was the origin of the two Gingko trees?

* What exactly was the “Brimfield Gardens Add” of which (according to my deed) my land was once a part?

* Who was the architect and builder of our house and did they build others in town?

Go to next chapter