Connecticut’s first military episode was the Pequot War of 1637.  The Pequots were a war-like, break-away band of Mohegan Indians originally from the Hudson Valley of New York. They had been in Connecticut since 1600 and feared an English threat to their territories. Between 1634 and the start of the war, they had killed traders on the Connecticut River and raided a settlement at Wethersfield where they slew six men and three women and carried off two girls. In 1637, the General Court at Hartford responded after the Wethersfield episode by raising a troop of ninety men commanded by Captain John Mason (1600-1672).

For the Pequot campaign men from sixteen to sixty were recruited and armed with twenty bullets and two pounds of powder per man. The levy accounted for thirty percent of the colony’s population. Mason soon broke the Pequot resistance in a decisive battle on the banks of the Mystic River. He was helped by nineteen men from the fort at Saybrook and also by seventy Mohegans. Between 300 and 700 Pequot men, women, and children died in Mason’s assault on their fort. Mason emerged from the expedition as a hero. With assistance from some Massachusetts men, Mason and his troop pursued the fleeing Pequots and eventually cornered about 300 of them in a Fairfield swamp. Only sixty Indians escaped the slaughter, with the remnant killed or sold, especially women and children, into slavery. The Indian extermination was based largely on English cultural blindness and not on any substantial Pequot threat. Connecticut had now freed itself from Indian power until 1675.

King Philip’s War broke out in 1675 when the Wampanoag Indians, a powerful Massachusetts tribe, killed eight settlers at Swansea in Massachusetts. The Indians were led by an able chief, Philip (c. 1639-1676), whose aim was to drive the English from the land. To aid Massachusetts, Connecticut sent 315 men and 150 Mohegan Indians under Robert Treat (1622-1710). Treat’s men helped defeat the Indians in a Rhode Island swamp battle. Other Connecticut volunteers captured an important chief near Stonington, Connecticut, as the Indians retreated. In the summer of 1676, 240 Connecticut soldiers with 200 friendly Indians under John Talcott (1632-1688) dealt a severe blow to the Indians at Great Barrington, Massachusetts. By then the war was at an end, and Connecticut had accomplished its goal of preventing Indian raids into the Connecticut Valley.

In 1689 Great Britain and France, struggling for mastery in Europe and overseas dominion, began a struggle that would last until 1815. During the Colonial Period there took place in North America four conflicts between 1689 and 1763. The first was King William’s war (1689-1697). In September, Connecticut first called up 200 men for duty on the Massachusetts frontier exposed to France’s Indian allies. Within a month, another sixty-four men were sent to Albany, New York, under Thomas Bull (1646-1708). In April, 130 more men and eighty Indians were dispatched to New York. In 1690, Connecticut’s Fitz-John Winthrop (1639-1707) led an intercolonial invasion of Canada that never got beyond Lake George because of disease and no supply. After that year, fighting trailed off and the war soon ended inconclusively with the Treaty of Ryswick of 1697. Until then, Connecticut troops helped garrison the Massachusetts frontier.

Throughout Queen Anne’s War (1702-1713), Connecticut kept sixty men on duty at Deerfleld, Massachusetts, the scene of a 1704 massacre by Indians, and 400 volunteers on alert in Connecticut. The colony twice refused to join Massachusetts in assaulting Canada but in 1709 sent 350 men to help British Army troops to invade Canada. Connecticut lost one quarter of this force to disease. In 1710, 300 Connecticut men helped capture Port Royal, Nova Scotia. The colony as well furnished five ships for this venture. By the time the war ended with limited British gains, Connecticut put another 300 men into the field and had to issue paper currency to finance the war effort itself.

There was a war fever in Connecticut for King George’s War (1744-1748). Eight ships with 1,100 men under Deputy Governor Roger Wolcott (1679-1767) helped the British seize Fort Louisbourg on Cape Breton Island. The Connecticut General Assembly spent £12,000 to equip this force during its eleven-month occupation of the fort. Expecting a deeper penetration of Canada, the Assembly offered bounties of ten to thirty pounds to raise 600 more men for the effort while maintaining a home force of 200 soldiers for frontier duty. These preparations required another issue of paper currency, but the colony did receive partial compensation in the amount of £28,000 at war’s end from Britain. King George’s War closed with all captured territories being exchanged–to the dismay of Connecticut’s fighters of the Louisbourg campaign.

The French and Indian War (1754-1763) was the decisive Anglo-French struggle for North America. Connecticut mobilized one out of every five of its men to fight, over 20,000 soldiers. In the fighting around Lake George, New York, during 1755, Phineas T. Lyman (1715-1774) commanding 1,000 Connecticut men, and Nathan Whiting (1725-1790) played key roles in beating back French assaults. Connecticut men helped build Port William Henry on Lake George and took part in an offensive against Fort Louisbourg. In 1759, Lyman assisted the British in the capture of the French fort at Ticonderoga on Lake Champlain, and Israel Putnam (1718-1790) participated in the Battle of Quebec. In 1760, Putnam distinguished himself in the fall of Montreal. Besides supplying manpower, Connecticut aided the British in finally driving the French from North America by provisioning the British troops with flour, wheat, beef, and pork.  Proportionate to size and resources, Connecticut expended the most of any other colony for the war effort.

When the Anglo-American squabbling of the 1760s and early 1770s deteriorated into warfare, Connecticut played a key role in the winning of American independence. As the news from Lexington reached Connecticut in 1775, 3,600 Militia from fifty towns hurried to Boston. Typical of the enthusiasm for the American cause that marked Connecticut throughout the Revolutionary War was the action of Israel Putnam, who left Pomfret and rode directly to Boston without a change of clothes. Another example was the Second Company Governor’s Foot Guard of New Haven under Captain Benedict Arnold (1741-1801). It was one of the first units into Massachusetts after Arnold forced powder and shot from reluctant New Haven officials. During the Revolution, Connecticut would be represented in Washington’s armies by about sixteen regiments, although these units were not always at full strength. But by 1776 half of Washington’s New York force was from Connecticut. 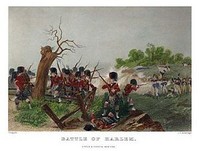 In signal campaigns of the Revolution, Connecticut men took an active hand. The capture of eighty artillery pieces used in the siege of Boston was an operation in which Benedict Arnold and Ethan Allen (1738-178
9) played roles. Israel Putn
am was at Breed’s Hill, Massachusetts (1775), along with the rangers of Captain Thomas Knowlton (1740-1776), who was later killed at the Battle of Harlem Heights, New York (1776). At White Plains (1776), the arrival of fresh Connecticut troops helped Washington make a successful escape. These men stayed with him for Trenton (1776). Benedict Arnold was highly instrumental at Saratoga (1778), and the brigade of Jedidiah Huntington (1742-1818) figured significantly at Monmouth (1778). The treason of Benedict Arnold at West Point, was, of course, a major blemish on Connecticut’s record.

Supply is as vital to wares soldiering, and in this aspect of the war Connecticut did yeoman service, earning the accolade of “the Provisions State.” Two Connecticuters served as commissary-generals of the American Army–Joseph Trumbull (1737-1778) who served from 1775 to 1777 and Jeremiah Wadsworth (1743-1804) who served from 1778 to 1779. Another Connecticuter who played a crucial role in the provisioning of Washington’s men was Governor Jonathan Trumbull (1710-1785) of Lebanon, Connecticut’s governor from 1769 to 1784.

In constant touch with Washington, Governor Trumbull sent arms, tents, food, and clothing to the American troops. Connecticut beef saved Washington at Valley Forge (1777-1778) and rescued him at Morristown (1779-1780). Valley Forge was a time of trial for the Continental Army. With 3,000 ragged and hungry men, Washington urgently called on the state governors for relief. A number responded but none more eagerly than Connecticut’s governor. Trumbull promptly organized the rounding up of cattle from eastern Connecticut which were then driven through New York and New Jersey to Washington’s men in Pennsylvania. Washington’s men consumed the first herd in five days. Throughout the winter and spring of 1778 Connecticut kept Washington fed with its arriving herds.

At Morristown in 1779-1780, Washington’s situation had again become desperate. The winter was extremely harsh, with snow drifts up to six feet, and the troops had begun to plunder the neighborhood for food. Washington told Trumbull of his plight. Within hours of getting Washington’s urgent plea for supply, Trumbull assured Washington that Connecticut would answer his call and made haste to deliver the provisions to Washington’s starving men–despite the complication of frozen roads and icy winds.

Connecticut’s supplying of Washington took place even though during the Revolution the state endured four destructive British raids. At Danbury in 1777, the royal governor of New York with a force of 2,000 was able to destroy 1,700 bushels of wheat and 1,600 tents. Benedict Arnold and David Wooster (1710-1777), with a militia unit of 200, harassed the invaders but could not stop the devastation. Wooster was killed in the attempt. In 1779 a British force attacked the saltworks at Greenwich and did considerable damage to the town before Israel Putnam’s militia drove them away. Later in the same year, the British raided New Haven, Fairfield, and Norwalk. In Fairfield, 200 buildings were burned. In Norwalk, the assault claimed 130 homes, 40 shops, 100 barns, 5 ships, 2 churches and some flour mills and saltworks. 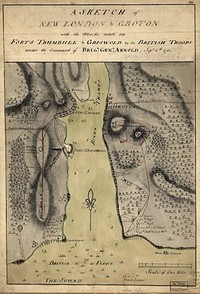 But far worse than these three raids, which generally damaged only property, was Benedict Arnold’s 1781 attack on New London-Groton with 2,000 British now under his command after his treason. In attacking Fort Trumbull on the New London side of the Thames River, Arnold’s contingent easily took the fort and then put the torch to warehouses and ships. A total of sixty homes were destroyed by the spreading fires lighted by Arnold’s men. On the Groton side of the river, Fort Griswold under Colonel William Ledyard (1738-1781) fell after bitter hand-to-hand fighting. The Americans had numbered only 150 and held off the British numbering 800. As Ledyard surrendered his sword, he was run through, and many of his men, including wounded, were massacred. Though Arnold himself had no part in the atrocity, the episode was one of the bloodiest of the entire war and inflamed Connecticut sentiment against the turncoat Arnold even more.

Much like Connecticut’s feats in the French and Indian War, the state during the American Revolution had distinguished itself out of all proportion to its size. Almost fittingly, Washington met his French allies in Hartford, Connecticut, and then in a series of meetings at Wethersfield, Connecticut, in 1781 began to plan with the French the decisive Yorktown campaign of 1781.

About the Author: Joe Duffy