Home » Articles From The Community » Foodways: The Culinary History of Wethersfield

In the mid 1990’s many long-settled communities along the Eastern seaboard – Plymouth, Williamsburg, St. Mary’s City, to name a few – established programs called “Foodways”, exploring the history, and in some cases, re-creating the foods used throughout the years in these communities.

Culinary Historian Paul Courchaine began Wethersfield’s own “Foodways” with a series of columns that he wrote in 1995 and 1996 for the then newly created Wethersfield Life newspaper.   Following is one of these columns.  The entire series is available in back issues of Wethersfield Life at the Wethersfield Public Library.

Starting at the Beginning: Preparing a Wongunk Meal 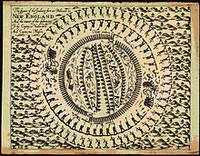 I could have easily started with the doughty adventurers who traveled here with John Oldham.  But those travelers found a culture which had existed for centuries along the Atlantic seaboard, that of the Woodland Algonquins.

Members of this culture had already shown English settlers how to survive the first years of the “starving time” at both Plymouth and Jamestown, by teaching them the agriculture of the new world.  While the first Wethersfield settlers faced no such hardship, the agricultural techniques of the Algonquins had already been adopted into the lifestyle of these Massachusetts emigres.

The Native Americans whom the settlers met were members of a tribe called the Wongunks, whose chief, of “sachem” was named Sowheag.  He apparently owned land on both sides of the river, from Glastonbury southwest to Middletown and the approaches of what became New Haven.

He sold the settlers a tract of land six miles north to south and eight miles east to west.  The Wongunks called the area “the cleared land” or Pyquaug, a name celebrated in one of Wethersfield’s newest [1995] restaurants.

What did these Wongunks eat?  Native American foodstuffs consisted of whatever the men caught in the hunt and what the women grew in the fields and gathered in the woods and swamps.  The principal meat was deer, eaten fresh or dried.  Rabbits, squirrels, raccoons, opossums, woodchucks, even skunks, all went into the pot.

Fish and the shellfish when available, were eaten.  The Connecticut River provided an ample source of salmon, shad, alewives, catfish and trout.  Fowl, such as wild turkey, geese, and the numerous species of duck that swarmed on the Connecticut River were also devoured.

The women were responsible for the field crops.  Principal among them were what the Iroquois called “The Three Sisters” – corn, beans and squash.  Corn, “green” or ripe, fresh or dried, was the most important.  Mixed with other ingredients it became the basis of succotash, a staple of the people’s diet.  A wide variety of beans were grown, as was summer, crookneck, Hubbard, acorn and scallop squash, along with pumpkins and Jerusalem artichokes.

From the woods and swamps, the women gathered wild onions, berries of all sorts, nuts, milkweed and skunk cabbage, groundnuts and pond lily roots.

All these wild edibles had been discovered by the Algonquins over several centuries.

The principal ways in which the food was prepared were boiling, roasting and grilling.

There were two set meals, a breakfast before noon and dinner in the evening.  Visitors were always welcomed to partake in the family meals.  Following are some sample recipes, if you are feeling adventurous and want to re-create a Native American meal.  Remember, salt and spices were not known, nor was a separate beverage until the Europeans arrived.  Feel free to add them, however – it’s the spirit of the meal that counts.

The sale of the land by Sowheag was only the first of many.  By 1774, only some 40 Wongunks were identifiable to the General Court, some living with the Mohegans, others as individual Christians in Farmington, Hartford and New Hartford.  The last 100 acres of their land was sold to reimburse Middletown for expenses associated with caring for Sowheag’s last descendant.

The Wongunks disappeared into the Connecticut community, both black and white, but not without having first added their culinary tradition to the Wethersfield “foodways.”

Corn soup and meal (or fowl)

2 pounds lamb or venison shanks or 2 pound chicken, cut in pieces.
2 cups (about 6 ounces) ? inch cubed butternut or other winter squash
? cup small white pearl onions.
1 quart water (or more if necessary)
1.Cut the meat from the bones.  Cut the meat into 1-inch chunks.  Put the meat, bones, squash and onions into the cold water and bring to a boil.  Reduce the heat to a simmer, and cook for ? hour.
? cup walnuts (instead of native black walnuts or other wild nuts)
1 (16 ounce) can whole hominy or 2 ? to 3 cups homemade hominy.
1 (16 ounce) can red kidney beans.
? cup chopped cranberries
2. Grind the walnuts to a powder in a blender or food processor.  Add the ground walnuts, hominy, bean and cranberries to the soup.  Simmer 1 hour.
Serves 4 to 6

3 cups water
1 cup coarse cornmeal (masa harina, available at Hispanic specialty stores)
1 cup fresh blueberries or 1 cup frozen berries, thawed.
In a 1-2 quart saucepan, bring the water to a boil.  Slowly add the cornbread and cook for 15 minutes, stirring frequently.  Add the fresh or thawed fruit, and cook slowly for 10 minutes, still stirring frequently, until the fruit is reduced to a pulp and permeates the porridge.  The dish may be served hot, as porridge, or thickened, cooled and sliced.

1 cup flour
1 cup cornmeal
1 tablespoon baking powder
? teaspoon salt
2 eggs
1 – 1 ? cup heavy cream
2 tablespoons unsalted butter, melted
maple syrup
honey
butter
1. Warm the griddle over high heat.
2. Combine the flour, cornmeal, baking powder, and salt in a strainer, and sift them into a large mixing bowl.
3. In a small mixing bowl, beat the eggs until they are frothy. Add the milk, cream and melted butter, and beat until the ingredients are well blended.
4. Pour the egg mixture into the dry ingredients, and beat until the batter is well mixed.
5. Lightly grease the griddle with a vegetable oil spray or butter.  Pour about ? cup batter on the griddle for each pancake and bake about 1 minute each side.  The cakes should be bubbly on top and dry around the edges when turned.  Serve them hot with a lump of butter on each pancake and a generous portion of maple syrup or honey over each serving.
Makes about 18 pancakes.

About the Author: Paul Courchaine