Home » Articles From The Community » History of Trinity Parish (Episcopal) 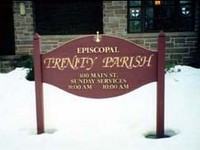 The cornerstone of Trinity Parish was laid on June 1, 1871. The earliest history of
Trinity Parish began in 1729, when the Rev. Samuel Johnson of Stratford,
Connecticut visited Westerly, Rhode Island and Wethersfield, Connecticut for
the purpose of establishing Episcopal churches at these places. These initial
efforts were unsuccessful.

In 1797, a church was organized and a building erected in the Newington section of
Wethersfield by the Society of Protestant Episcopalians. This group was made up
primarily of dissident members of the Congregational Church living in that
area. This attempt failed and was disorganized and the church was sold and
demolished.

The Rev. John Williams who was connected with Washington College (now Trinity
College) preached a single sermon in Wethersfield during the year 1840 or 1841.
It was not until 1866, some 25 years later that Rev. Henry W. Nelson, Jr.,
rector of Good Shepherd Church in Hartford conferred with some local residents
of Wethersfield, and it was decided to arrange for a Sunday service.

The congregation met in Academy Hall in January of 1868. The total number attending
was about 120 persons. The Rev. Nelson was the preacher. A second service was
held in late January of 1868. Some 155 persons attended this service.

John Williams, Bishop of the Diocese, made a pastoral visit to Trinity Parish,
and it was determined to move ahead with the work of the mission. The Bishop
administered the rite of confirmation to eight persons in 1869. Another aspect
of growth occurred in 1869 when a seminarian (who was attending Berkeley
Divinity School) by the name of John H. Watson began morning services. A church
school was inaugurated at that time. Mr. Watson later became Rector of the
Church of Good Shepherd.

The land (owned by Silas W. Robbins) was purchased. This is the land where the Church now stands.

The Parish was received into the Diocese of Connecticut on June 15, 1870. Prior to this the first persons baptized were Mary Francis Warner and Albert Emmett Warner on May 23, 1869. The first confirmation class was held on May 23, 1869. The first marriage was held on July 1, 1868. The groom was Arthur Edward Baker and the bride was Frances Ann Coleman. The first burial was that of an infant, John B. Church, on October 15, 1869. 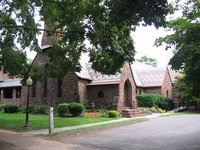 The church building in which we continue to worship today was begun in 1871. The
architect was E.T. Potter of New York (acclaimed locally as the architect of
the Mark Twain House in Hartford.)  The Church was occupied for the first time on Easter 1874, and the Church was consecrated on October 1, 1874.  In 1955 the present parish house was constructed. The church was enlarged in 1963, and a new office wing was also added as a part of that project.

This history lists all the various rectors and terms of office. For some of us the history we recall commences with Rev. Percy Felix Rex, who served the parish from 1932 to 1937. Evidently the Bishop must have thought Trinity Parish was dying on its feet as reported to the annual meeting by Mr. Alfred W. Hanmer, then Senior Warden, in 1932. Rev. Rex was a leader who led the Parish back from the brink by anticipating future growth and expanding of the Church. 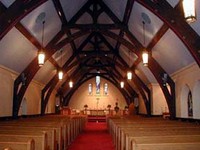 The next Rector was Rev. A. Palmore Harrison who commenced his rector ship at
Trinity Parish on January 1, 1941 and served the Parish until January 30, 1947.
His tenure coincided with World War II. Another event that occurred during his
tenure was the “Great Barnum & Bailey Circus Fire” in Hartford. As many of our parishioners were involved in this conflagration, Rev. Harrison called or visited each of the Parish families to determine their needs. Another near disaster happened in 1943 when the Hart Seed Company located next door caught fire, and the spread of the flames severely damaged the old Parish Hall.

Following Rev. Harrison’s departure, The Rev. Maxwell B. Courage became Rector from 1947 to 1949.

The next Rector was The Rev. John Hall Findlay who served the Parish for
twenty-five years, from 1951 until his retirement in 1974. He was affectionately called “Father John.”

During his tenure many changes were made: the Parish House Building Committee was reorganized in 1953, an architect was hired, the property lines with the Hart Seed Company were defined so encroachment would not occur and the old Parish Hall was demolished.  The cornerstone was laid for a new parish hall in 1954. This stone holds a Cross, a Bible, Prayer Book, History of the Parish, list of Donors and a list of all the families in the Parish. Church School was held at the American Legion Hall during the construction period. Horace B. Francis was General Chairman.

The Parish House was dedicated on Easter Day, April 10, 1955 by the Rt. Rev. Walter H. Gray. Rev. Findlay then led the Church in acquiring the Pelletieri Property on the south side of the Church. This house originally was the rectory of the Rev. James Lockwood, a minister of the Gospel in the First Society. It was constructed in 1767. At that time the British flag waved over our town and it remains as the only house in Wethersfield occupied by a colonial minister.

Immediately behind the Lockwood House is a small house called the Dowling Property. Thiswas thought to be a house built to house slaves owned by Captain Justin Reilly,who purchased the house following the death of Rev. Lockwood. At one time thehouse was also occupied by Marshall Harris’s family, whose descendants are WarrenJ. Blessing, Sr., his wife Dorothy Harris Blessing, and their son Warren J.Blessing, Jr.

As Trinity Parish was expanding rapidly it was necessary to obtain assistance for the Rector. In May of 1960, The Rev. Frederick P. Lefebvre was appointed as the first Curate. On his resignation in 1963, The Rev. John A. Rogers was appointed Curate. When he resigned in 1966, he became Vicar at Christ Church, Quaker Farms, Connecticut. He was succeeded by The Rev. William Sorrells who served until 1968. The Rev. Donald H. Parker served as Curate from 1968 to 1970.

At a special meeting of the Parish in 1961 it was voted to expand the Church.Ground was broken on St. Mark’s Day, April 25, 1963. The sanctuary was extendedeastward and offices were added. The first wedding held in the newlyrefurbished church was that of Torrey Watson, daughter of Mr. and Mrs. Elmer S.Watson, and Paul Wise. It was held on November 9, 1963.

The100th Anniversary of Trinity Parish was celebrated on October 19, 1969.

During the tenure of Rev. Rogers a number of changes occurred: the Rectory on Hartford Avenue was sold, two women were nominated to be lay-readers and administer the chalice, the mortgage was burned and the Parish was now free of debt and Dowling House was purchased, completing the property lines as they are known today. During the 1990’s the Parish pledged and gave Camp Washington $10,000. 00, the nave floor was reinforced, new windows were installed in the Parish House, the Seabury Room was created and decorated, the Haitian outreach program was started, and a large bequest of $287,000.00 was given the church by Susan McCann. 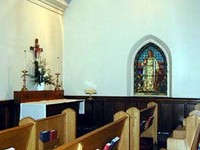 Of special interest to the Rev. Rogers and the parish was the relocation of the altar and the renovation of the nave. The altar prior to this change was located against the east wall of the apse. The change made at this time made it possible for the celebrant to face the congregation during the service. This work was done in 1988. The financial support for this project was made by the Montgomery family in memory of John Montgomery, former Warden of the Trinity Parish.

Prior to 1979 three new liturgies were introduced. These were called the “zebra books”, and finally led to what is now the familiar 1979 Book of Common Prayer as ratified by the 1978 convention of the Protestant Episcopal Church.

Fr. Rogers will be remembered for conducting memorable services particularly at Easter and Christmas.

The Rev. Joanne Neel-Richard was named Interim Priest on August of 2001.

Subsequently she was named Priest-In-Charge. She served in that role until August of 2006.

The Reverend Scott Lee was called as rector and took office September 1, 2006.

The information as submitted above was excerpted from the MacCutheon history of Trinity Parish by Richard G. Rouse and submitted here as a digest of that history. Additional notes were added starting with the ministry of the Rev. John A. Rogers and the Rev. Joanne Neel-Richard.