Home » Articles From The Community » London – A Black Governor of Connecticut

African American history has long been neglected in both history books and museum programming.  Due to this fact, Wethersfield Historical Society’s staff strove to incorporate a telling narrative of one of Connecticut’s Black Governors in the 2011 Lantern Light Tours. The following is a short narrative of London’s life and impact on his community during his tenure as Colonel John Chester’s slave and the Black Governor in 1760 adapted from research and his wife’s script in the 2011 Lantern Light Tours.

The details of London’s early life are not plentiful, but it is clear that he was born in Africa and transported to Wethersfield when he was only a small child. Sherman W. Adams, Civil War Naval Officer and town historian, recorded an instance when London, a little slave boy who spoke better English than most other Africans in Wethersfield embarrassed himself. Adams writes that London found a very pretty puppy one morning and that he caught him so that he could play with him.  But the puppy quickly let him know that he was playing with the wrong animal because it was not a puppy.  It was a skunk!  Due to London’s mistake, skunks have been referred to as “Wethersfield puppies”.

London was the slave of Colonel John Chester, Senior, who was a member of the General Assembly and a judge of the County Court.  Colonel Chester was one of the most important men in the colony at this time.

Many slaves accompanied their masters to the election of the colony’s governor every year and held their own election for a leader of the Black community as well.  The man chosen was most often a strong, respected and influential member of the community.  He was also, in many cases, a servant to a wealthy and influential family like Colonel Chester’s.  Their election and celebration was often met by ridicule by the Whites.

The office of Black Governor originated in Massachusetts and then appeared in Connecticut and Rhode Island.  In Connecticut, the practice started in the 1750s when Captain Thomas Seymour’s slave was elected Connecticut’s first Black Governor in 1755.  The election was followed by a large parade and festive celebration.

A Black Governor could be called on to perform important functions within his community.  In many towns, the governor meted out punishments and upheld law and order among the African inhabitants.  He also acted as a mediator between the Black and White communities.  Black Governors often appointed a lieutenant governor and deputies to help carry out these tasks.

Colonel John Chester’s slave, London, was elected Black Governor of Connecticut in 1760.  His wife, Betty, was thought to be an Indian.  She died in 1787.  Sometime during his adult life, London was made free.  He moved to West Simsbury where he was still called “Governor.”  He died at about age 80 and a pauper of the Town of New Hartford.2

This article is a compilation of work from the staff and volunteers at Wethersfield Historical Society. Graduate intern Allison Golomb successfully researched and composed the 2011 Lantern Light Scripts which served as inspiration for this short article. Administrator & Collections Manager Rachel Quish Zilinski and Education Coordinator Mary Pat Knowlton are event organizers of the Lantern Light Tours program and work to engage the community in their own local history with different characters each year. 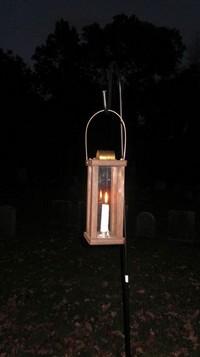 Please join us for Lantern Light Tours in the coming October to visit in the burying ground with a whole new set of deceased historical figures.