By Abbie B. Dunn

I was not privileged to know Alfred W. Hanmer, but from all I have heard and read, he was “Mr. Wethersfield.” If he were alive today, I’m sure he would be B.M.C.A.’s Man of the Year.

Serving as First Selectman for 46 years, he had a hand in just about everything that happened in town from appraising damages done by stray dogs to keeping the inmates of the town farm contented.

He was born in the old family homestead on upper Main Street opposite what is known as Hanmer Park. This was named for Capt. John Hanmer, who embarked from this point with 74 men for the Battle of Long Island, Aug. 23, 1776. The area was formerly known as Goose Pond -it was filled in and seeded in 1929.

His boyhood was spent on his father’s farm, helping with the chores. He attended classes at the Old Academy, and spent one term at Wilbraham Academy in Massachusetts. His father died when he was 17, and he had to shift for himself.

After three years of farming, he decided to learn the general merchandise and   grocery business. He worked in a Hartford wholesale grocery for three years. 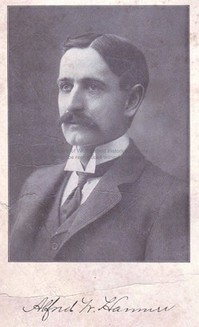 In 1892, at the age of 25, Mr. Hanmer, in partnership with Charles Bulkley, bought the firm of Dix and Welles, dealers in meat and groceries. In 1900, he bought out his partner’s interest and continued to operate the store at 1654 Main Street, next to the Fire House for 40 years or more.

Many older citizens have fond recollections of this store which carried   everything   from kerosene and coal to lanterns, rope and groceries. Flour and molasses came in barrels, and sugar in 100 pound bags. Ed Willard remembers that “it was the best source of penny candy in town.”

Town politicians gathered frequently around the pot-bellied stove to “discuss the issues of the day.

He had married Miss Nellie Talcott of Hartford in 1890 — they had five children:  Clara, Frances, Elizabeth, Alfred Jr. and John. Of these Mrs. Elizabeth MacCutcheon and John Hanmer survive.

He was a staunch Republican all his life.

In 1898, when the young men of the town elected this 28-year-old First Selectman, some of the old guard suggested that “with proper guidance, the boy might get through one term.”

He got through that term and many more. He was electee annually until 1938, when the term was extended to two years. In 1942, he had hoped to retire but friends urged him to carry on for one more term.

He was such an efficient administrator that the whole town had come to depend on him.

The convenient location of his store, diagonally across Main Street from the town hall (now the Old Academy), made it somewhat of a town hall annex. Residents would drop in to chat, discuss taxes or the weather and do their marketing.

The first year he was in office, Wethersfield had a population of 2500 and a budget of $15,000. Forty years later, the population had risen to nearly ten thousand and the budget to half a million dollars.

Mary G. Jensen, in an article in the Hartford Courant of April 12, 1942, described him as “tolerant, sympathetic, easy to talk to and laugh with — a good listener.”

Electric lighting, sewers, a consolidated school system, more modern school building, a reorganized fire department, a police force and welfare organization were all effected during Hanmer’s terms in office. He was a member of the Metropolitan District from 1929 to 1942, serving on the Public Works Committee.

As a member of Trinity Episcopal Church, he served as Senior Warden for many years. He was a charter member of the Rotary and supported whole heartedly their projects for the welfare of the town. I could continue – naming just about every organization and facet of government in town, because he had a hand in them all.

His interest in the preservation of old homes is best illustrated by the fact that he and a group of men purchased the old Webb House when it was in danger of falling into commercial use. They sold it later to Wallace Nutting who restored it before selling it in turn to the Society of Colonial Dames.

Senator Danaher thought so highly of Mr. Hanmer that he asked unanimous consent to have Mary Jensen’s article in the Hartford Courant written into the Congressional Record of May 1, 1942.

One of Hanmer’s outstanding achievements was the success of the   town’s   Tercentenery Celebration in 1934.

David R. Woodhouse, in a paper read at a Testimonial reception held at Wethersfield High School on June 19, 1944, stated that: 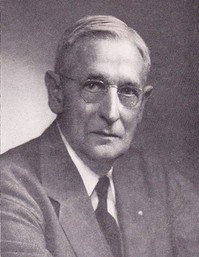 “By all with whom he came in contact, either socially or in business, he has been recognized as one of the prominent men of Wethersfield — nature has given him an engaging personality and an abundance of physical stamina, intellectual vigor — he is an idealist but no Utopian dreamer — he is a true son of Connecticut — in loyalty and spirit and understanding.”

Note: I want to thank Mrs. MacCutcheon for her help (A.D.)

[Alfred W. Hanmer Elementary School was built and dedicated in 1967.]

About the Author: Abbie B. Dunn