Home » Articles From The Community » Religion in Glastonbury: the Congregationalists

[Glastonbury, Newington and Rocky Hill Connecticut are all daughter towns of Wethersfield – each with its own story.]

The need for early Congregationalists to participate weekly in public worship was a major factor in causing Glastonbury to break away from Wethersfield.  On Sundays, if at all possible, Congregationalists attended both morning and afternoon worship services.  Crossing the Connecticut River by boat in bad weather to attend church was difficult.  As a result, within a few decades, those living on the Glastonbury side of the river sought to form their own town with its own church.  They got permission to separate in 1689 but not until 1693, when the Reverend [Timothy] Stevens came to minister in Glastonbury, could the separation become official.

A similar thing occurred again in 1836 when 14 members of Glastonbury’s First Church who were residents of South Glastonbury formed an ecclesiastical society called the “Congregational Society in South Glastonbury.”  They were joined by others so that when the congregation known as “South Church” began holding services, it had 39 members.
Denominational Organization–From their beginnings, Congregational churches had close ties, offering each other support and working together to promote mutual interests like sponsoring seminaries and missionaries.  However, until 1871 when the National Council of Congregational Churches was formed, Congregational churches had no formal denominational organization. 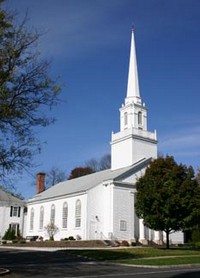 Criticizing Puritans — It has long been the fashion to pick on the earliest Congregationalists and, in doing so, to call them Puritans.  Epithets like “Puritan” and “Quaker” were originally terms of derision that later became the names commonly used for the groups being mocked when these labels first were employed.  However, derision continues to this day.

Commentator H. L. Mencken (1880-1956) described Puritans as dominated by “the haunting fear that someone, somewhere, might be happy.”  Puritans, however, saw Christianity as the way to happiness–happiness both in this life and beyond.  They viewed deviating from God’s way as a sure path to misery.

A common criticism of Puritans today centers on the New England witchcraft trials which took place during the Puritan era.  A basic biblical teaching, strongly reinforced by Jesus, is to overcome evil with good.  Trying and hanging witches is the opposite.  Also, it’s likely that many allegations of witchcraft were false in that the accused was not knowingly practicing witchcraft. 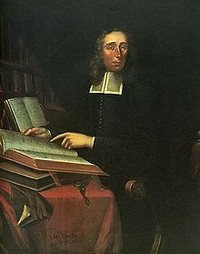 In New England, accusations of witchcraft were often instigated by teenage girls, and the accused frequently were old women living at the margins of society.  Occasionally, however, those accused of witchcraft were teenagers or men.  Accused witches were tried in the colonial courts that handled criminal cases.  Neither civil nor church authorities initiated these cases, and prominent Puritan ministers, like Increase Mather, came out publicly against accusations of witchcraft and trying accused witches.

Today, the best known local witch is a character in the novel The Witch of Blackbird Pond, assigned reading in Glastonbury’s public schools.  It’s a story written for young people in 1958 by Elizabeth George Speare, which is set in Wethersfield during the late 1600s.  The book appeals to late 20th century sensibilities regarding the evil of witch hunts and the virtue of women’s rights, but none of its central characters or happenings is based on any real person or actual event.  In this novel, as elsewhere, the witch trials are characterized as horrific examples of religious extremism — Puritans doing their thing.

We still say “witch hunt” to describe a public hounding of innocents based on popular bias.  Any witch hunt requires a strong popular sentiment against witchcraft or other feared social phenomenon.  Witch hunts still happen.  Remember, for instance, the prosecutions of childcare workers in the 1980s for alleged child molestation based on the coached testimony of children who were only a few years old.  At the time, those prosecutions enjoyed widespread popular support, but they now look like miscarriages of justice.  Also, consider the plight of the Duke lacrosse players who, in 2006, were accused of rape and widely reviled, despite significant exculpatory evidence.  These contemporary events can help in understanding how popular outrage fueled the witch trials of long ago.

Clergy: Glastonbury’s first clergyman was Timothy Stevens.  He was a Harvard graduate.  Harvard, like Yale and most other early American institutions of higher learning, was founded in large part to train clergymen.  Also, until about 1860, most colleges and universities had a decidedly Christian focus, with theology generally regarded as the “queen of the sciences.”  That’s hard to imagine today in what is sometimes known as the Postmodern Age when there often is disdain for Christianity at these same institutions.

In 1690 when Timothy Stevens first preached in Glastonbury, he was not yet ordained.  He was, however, sought after because, at the time, Harvard was English America’s only college and it generated few graduates.  Those seeking to form a church in what became Glastonbury offered Stevens not only a salary, but also a house and land.  In 1693 he accepted, was ordained and settled here, thereby enabling Glastonbury to become an independent town.  At that time, the Reverend Stevens was 26 years old.  He was pastor of First Church until his death on April 14, 1726, at age 60.

With his education and position, the Reverend Stevens was among the best known and most influential men in Glastonbury.  To some degree, the same is true of the many subsequent pastors who have ministered to congregations, First Church and others, here in Glastonbury.  They often have been involved in community activities and events.  Many of the early ones, including Stevens, engaged in some farming to help support themselves.  They also pursued intellectual endeavors.  For instance, the Reverend Alonzo B. Chapin, Rector of St. Luke’s Church, wrote the first book about Glastonbury history.  It was published in 1853.  Today, the tradition of pastors as significant members of the community continues with a clergy that includes priests, rabbis and others.

About the Author: Henry von Wodtke