Home » Articles From The Community » Reverend and Colonel Elisha Williams 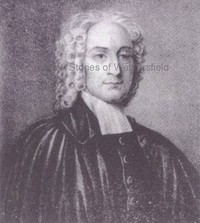 The following article, written by John C Willard, is from the archives of Wethersfield Historical Society.

This may seem like a strange title, but a Wethersfield resident was both a minister of the church and a military man, as well as being selected as Rector (President) of Yale College.  At one time he had more than half the college students studying under him at his home in Wethersfield.

Elisha was born in Hatfield on the 24th of August, 1694, the son of Reverend William Williams, pastor of the Hatfield church for nearly 56 years, and Martha, daughter of Reverend Seaborn Cotton.  He graduated from Harvard College in 1711, with a degree of Master of Arts in 1714.  He studied divinity under his father and came to Wethersfield and in that same year married Eunice Chester, daughter of Thomas Chester.  They had seven children, only two of whom survived their father.  He took up the study of law thinking of applying himself to it.  He was prevailed upon to undertake the voyage to Canso, the N E Cape of Nova Scotia, where he officiated as Chaplain to the fishermen.  On his return home he again took up the study of law and served for several years as a representative and was clerk of the lower house of the Assembly.  As a result of a disagreement among the Trustees of Yale College he tutored a number of students, which he performed “to the great satisfaction of the Trustees and the Advantage of the Scholars.”

He was struck with a serious illness, but recovered and was Pastor of Newington church.  In 1726 he was chosen as Rector (President) of Yale College.  He was very successful in administering the college, but the college was in such a poor state financially that he was obliged to teach a class, sometimes two.  With some preaching he again gave out physically and his eyes ‘swelled to the bigness of an Egg,” and threatened him with the loss of both of them or his life.  He sought release from his duties and returned to Wethersfield where with exercise and time he again regained his health.  He was saddened by the untimely death of two sons and a daughter, but returned to the Assembly and was appointed one of the Judges of the Superior Court.

When the expedition against Cape Breton was set on foot, he was appointed by the General Assembly as Chaplain of the regiment sent by the Connecticut Colony.  He was interested in bringing religion to the Army and wresting Canada from the French as a menace to New England.  When a regiment of 1000 men was raised for another expedition he was again appointed by the General Assembly as Chief Colonel of the regiment.  The regiment proceeded to New London where they awaited orders to embark, but none came that summer.  Difficulties arising in the payment of the solders, Colonel Williams was sent to England in their behalf.  There were many delays and it took him over two years to sail to England and return.  His wife died after 36 years of happy marriage, so Colonel Williams came back from England with a new wife, the daughter of Reverend Thomas Scott.  She was a very remarkable person, indeed.  “A lady of great reading and knowledge, extensive acquaintance, a good penetrating mind, and good judgment, of Abounding Charity, and unaffected Piety and devotion, adorned with every recommending Excellence, few liv’d more esteemed and Lov’d and died more Lamented.”  So read her epitaph.

Colonel Williams lived only a few years after his return from England dying in 1755.  Where he lived before going to Newington is a question.  He owned land at the southeast end of Broad Street, but there is no record of a house there.  On the other hand, the house now know as the Buttolph-Williams House was known for years as the “Older Williams House” to distinguish it from that of his nephew Ezekiel Williams nearly opposite.  In his later years his children built him a house just to the north of what is now Robbinswood Drive.  One of the doorsteps of this house is said to have been used by Silas Robbins when he built his house (still standing).  Elisha is also said to have planted a row of elms which grew to a giant size along Broad Street.  They have long disappeared, but Mr. Robbins went to considerable expense to keep them standing for many years.

One account tells of how the famous Elizabeth Canning accompanied Elisha and his wife from England, but that is hardly possible.  However she may have lived at the Buttolph-Williams house as Elisha kept a home here after going to Newington, and wrote her instruction there.

Few Wethersfield men attained such worthy commendation as Colonel and Reverend Elisha Williams, and that in spite of continual poor health and discouragements.

Williams was a “New Light” minister, as those who supported the Great Awakening were called. When Williams led Yale in Wethersfield in 1720, Jonathan Edwards was his student. George Whitefield was a friend of Edwards and Williams. All spoke locally to foster the Great Awakening.

That movement upset the political structure of Connecticut, eventually allowing southeastern Connecticut to emerge as a power base, with the later election of Jonathan Trumbull as governor.

In 1709, Wethersfield’s West Division (Newington) petitioned the town for separate parish privileges and were granted permission to worship among themselves for four months of the year (November – February) and excused from one-third of their tax. In 1712, West Division again petitioned for separate parish privileges and permission was granted. In 1713, they incorporated as the Second Society of Wethersfield. Many problems arose however, and a minister, Rev. Elisha Williams, was not settled until 1720.

As Willard says, Williams left for New Haven after four years in 1726 to become the fourth president of Yale.

Williams had ministered at Canso, Nova Scotia. Canso is on the northeast coast of the Nova Scotia peninsula across from Cape Breton Island. The settlement of Queen Ann’s War, by the Treaty of Utrecht in 1713, had France cede lower Nova Scotia to the United Kingdom while France retained control of Cape Breton Island. King Louis XIV proceeded to spend the French treasury to build a massive fort at Louisbourg on Cape Breton.

Louisbourg was thought to be impregnable. The New Englanders stunned even the British when they took Louisbourg during King George’s War (1744-1748). The Willard article highlights how influential Williams was in this effort.

Settlement of King George’s War ceded Cape Breton back to France. The quid pro quo was that the French, who had seized British holdings in India, would return Madras to Great Britain. New Englanders were outraged. Prescient leaders here recognized that there would be another war with France; and the difficult task of taking Louisbourg would have to be accomplished again.

Unfortunately, Williams’ health was now frail and he died while doing this.

Read more about Rev. Elisha Williams in Houses of Worship.

About the Author: John C. Willard