Home » Articles From The Community » Sgt. Maj. Robert H. Kellogg, "I wonder if they know at home of our real condition here."

“I wonder if they know at home of our real condition here.”

When Sergeant Major Robert H. Kellogg described the first night in Andersonville Prison he said that “there were ten deaths on our side of the camp that night. The old prisoners called it ‘being exchanged,’ and truly it was a blessed transformation to those who went from such I miserable existence on earth, to a glorious one above.”

(Photo  courtesy of the Museum of Connecticut History.   Sgt. Maj. Kellogg is on the right. On the left is Oscar Wiel.)

There were many horrors of Civil War prisons and Robert H. Kellogg was one who witnessed them and lived to write about them.

The American Civil War was a war that showed the horrors of what Americans could do to one another. The treatment of soldiers in prisons during the war is something many people want to forget about but for Kellogg, that would never be the case. By 1862 young men in the North were enlisting into three year agreements with the Union to fight and Kellogg was one of those men. Kellogg was from Wethersfield, Connecticut and on August 11th, 1862 Kellogg joined the 16th Regiment of the Connecticut Volunteers, he was only eighteen years old. Even though Kellogg was a mere teenager at the beginning of the war by the end he would see more than he ever thought possible in the hell that was Andersonville Prison.

Kellogg and the 16th Regiment had very little training before entering the harsh reality of battle. These men were physically and psychologically unprepared for what was to come. Once Kellogg’s regiment reached Washington at the end of August they were confronted with the harsh reality of war by the horse drawn ambulances full of wounded and ill men trying to receive medical attention. Those images would be intensified one month later when Kellogg and the men of the 16th fought in the bloody battle of Antietam, in which many Connecticut men were wounded or killed. The battle of Antietam would not be the worst thing to happen to Kellogg over the next three years.

The bloody battlefield conflicts in the South during the Civil War would be the least of Kellogg’s worries by the spring of 1864. Kellogg and over four hundred men of the 16th were captured by rebel troops in April of 1864. After Kellogg’s capture he was eventually sent to Andersonville Prison in Georgia with some other Connecticut men to be held hostage there until he was either given up for an exchange or till the war was over. Andersonville Prison has one of the worst reputations of Civil War prisons, especially for the treatment of their prisoners and Kellogg’s diaries can truly attest to that. Kellogg made it his personal mission to document every day that he was in the prison whether it was about food rations or prisoners deaths. The “mere walking skeletons covered in filth and vermin” would be his fate for the next year.

Kellogg had to make do with seemingly impossible circumstances and somehow make it though this living hell in order to come home to Wethersfield.

Living in Andersonville was a true test of physical and mental strength which Kellogg and others from Connecticut had to face constantly. The men had to have support from one another in the barracks, or stockades as it was referred to, in order to make it through the prison.

Food was a necessity and the men would ration out what was given to them with each other to make the conditions more manageable. A day’s rations for a prisoner were “a pint and a half of course corn-meal, two ounces of musty bacon and a pinch of salt.” Along with the small amounts of food the men had to deal with the cleanliness of their living conditions and how truly disturbing they were. After only being there two or three days there were lice crawling all over them, but there was nothing they could do. Andersonville prisoners were broken down physically and the mental reminders of being in the hands of the enemy were sometimes even worse.

The Southern troops that were controlling Andersonville seemed to be living a normal and blissful life, by Kellogg’s account, which made him question the war at hand. On May 14th, 1864, Kellogg wrote that “a picnic or something of the sort is going on. They [southerners] have a band of music and a great crowd of ladies are present. What a difference being on the inside of the stockade.” These prisoners had to watch the Southerners live a happy life while they were living in an inhumane environment. The lucky prisons, like Kellogg and other men from Connecticut, were able to live through Andersonville imprisonment but they would never forget the treatment they received by the Southerners at Andersonville. The survivors of the prison had the haunting reminders of all the men that would never get to leave the prison grounds.

Kellogg was able to survive Andersonville and the war itself. On June 1st, 1865 Kellogg was discharged from the 16th regiment as a sergeant major after spending some time in a New Haven hospital and was ready to go home to Wethersfield. After his discharge he went back to Wethersfield and decided to make a life for himself there. In 1865 while at home, Kellogg wrote a book entitled Life and Death in Rebel Prisons: Giving a Complete History of the Inhuman and Barbarous Treatment of Our Brave Soldiers by Rebel Authorities, Inflicting Terrible Suffering and Frightful Mortality, Principally at Andersonville, Ga., and Florence, S.C.

The book shows the horrors of Andersonville through Kellogg’s eyes and the extremes that the prisoners had to go through on a daily basis. Kellogg wanted to make sure that Andersonville was never forgotten and writing this book was a way of making the past is permanently known. 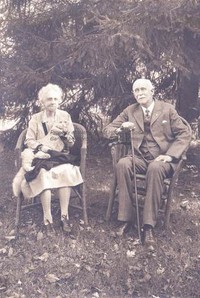 For the rest of Kellogg’s life he made sure that the horrors of Andersonville Prison would never be lost to the past. In 1907, Kellogg was selected as a representative speaker at the ceremony for the memorial created in Georgia for the men that occupied Andersonville Prison. Kellogg spoke on behalf all those men who were imprisoned at Andersonville. Life and Death in Rebel Prisons and Kellogg’s life itself can be used to truly understand what Union prisoners had to go through on a day to day basis in Southern prisons. The last line in Kellogg’s book says it all; “let them also hear the words, – Sacri
fices are never lost.”

About the Author: Danielle Johnson