Home » Articles From The Community » Supplementary Remarks on the Old Bridge 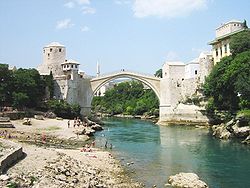 “I was fascinated to read about the Old Bridge Restaurant.  The owner’s
hometown of Mostar takes its name from the Old Bridge (Stari Most). It
was built in 1566 on the orders of Suleiman the Magnificent. We visited
Mostar in 1983.

Stari Most is a beautiful, classic example of
Ottoman architecture/engineering. It spans a deep chasm formed by the
Neretva River.  Mostar was strategic to the frontier skirmishes between
Ottoman-controlled Bosnia and the Habsburgs’ Roman Catholic province of
Croatia. Suleiman the Magnificent ordered the bridge built so that
Ottoman troops could move easily back and forth across the Neretva. The
Ottoman Empire reached its maximum penetration of the Balkans under
Suleiman.

Unfortunately, Stari Most became a casualty of the
1990’s Balkan Wars. The Croats fought the Bosniac Muslims at Mostar.
Systematic gunfire from Croat tanks took down the bridge. The Croats
knew their history and the symbolism Stari Most’s destruction.That
action fell under the umbrella of “crimes against humanity”. Stari Most
has since been rebuilt with funding from UNESCO; but it’s not the same.”

Go the “About the Author”