Home » Articles From The Community » The Chesters of Blaby, Leicestershire, England 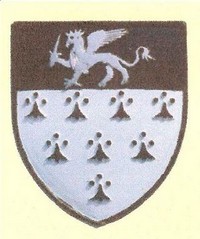 It is believed the family descended from the Chesters of Hertfordshire (*) and that Leonard Chester (Snr), who purchased land in Blaby, was closely related to Sir Robert Chester, a gentleman of the Privy Chamber of King Henry VIII. After the dissolution of the monasteries in 1536, the priory lands of Royston were leased to Robert and in 1540 the King granted him the house and the lands, the lordship of the manor of Royston and all the lands of the late priory in the counties of Hertfordshire and Cambridgeshire. The grant was in repayment of his father’s service and sums of money lent to the Earl of Richmond during the Wars of the Roses. The Chesters were always at the forefront of history. In 1544, Robert left Royston with 25 archers to form the King’s bodyguard when he sailed for Calais for the siege of Bologne. Robert Chester was knighted in 1552 by King Edward VI.

The Chesters of Blaby were also people of substance and even though the main male line died out in Blaby more than 300 years ago, there are still roads named after them (Chester Road and Chester Close).

Leonard Chester (Snr) was born about 1565 in Chipping Barnet in Hertfordshire. When his father William died, Leonard inherited the messuage (a dwelling house together with its outbuildings, curtilage, and the adjacent land appropriated to its use) called the Flower de Luce, other lands and messuages in Chipping Barnet and a silver goblet. Also in his will, which was dated 1565/66, were instructions that William be buried in Chipping Barnett Church, “as near unto my wife Mawde as may be.” 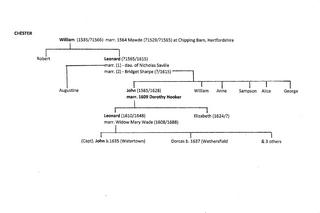 Blaby is a village about 5 miles south of Leicester, on the main road to Lutterworth. Queen Elizabeth I was on the throne when the records showed the Chester family was living in Blaby. The first mention of the family in the village was the baptism of Leonard’s son, George, in October 1594. Leonard purchased a small estate in Blaby consisting of two messuages, five cottages and six and a half virgates of land, (one virgate was about 30 acres). The estate extended into the neighbouring village of Countesthorpe and was held for the King as the Manor of Leicester, part of the Duchy of Lancaster. The holding was rated as having an annual value of 40 shillings

It is not known when the Blaby Chesters left Hertfordshire but there is evidence they lived elsewhere in Leicestershire before settling in Blaby. Leonard was married three times: first in Blaby to a daughter of Nicholas Saville (another old Blaby family to have a road named after it); in 1578 to Bridget Sharpe in ‘Frisbie Super Wreke’ and in 1606 to Jane Wolle. Leonard had five sons and two daughters. The mother of the eldest son, the unfortunate Augustine, was Leonard’s first wife. The others were all Bridget’s children: John, (born 1585); William (1587); Anne (1589); Sampson, (born 1591 in Desford); Alice (1593) and George (1594). Jane had no children and died in the third year of the marriage.

Leonard (Snr) died in 1615 and was buried at Blaby. As he was a tenant of the Duchy of Lancaster, an inquest was held by the King’s escheator at Leicester: ‘Escheat’ is a common law doctrine that operates to ensure that property is not left in limbo and ownerless. The jury found that Leonard had died a widower and that his son and heir, Augustine was over 21 years of age at the time of his father’s death.

Leonard’s will, dated 1614, instructed that he be buried in the Parish Church of Blaby near the grave of his wife Bridget. He gave 6 shillings and eight pence towards repairs of the church, (All Saints). His will also instructed that the following bequests be made;
“And whereas by re-grant of my son John I hold one half of a yard land in Blaby for a term of years not expired, I give the unexpired term to my son, Augustine, My two sons Sampson and George Chester to be my Executors and residuary legatees and Mr William Yard of Cosby, to whom I give a legacy of 10 shillings to be overseer of my will. My executors are not to require payment from my son Augustine of his debt to me for five years from this date.”

Leonard was the richest man in Blaby and in 1611, when a tax was levied on wealth, he paid more than other local tax payers. He was assessed as having goods worth £5, on which he paid five shillings. Strangely, although tax could be levied on the value of land, he was not required to pay anything on this account. Maybe by this time, he had transferred his estate to his sons?  When he died in 1615, Augustine was named as his heir but the will left him no property, on the grounds that he’d already received part of the estate. The remainder of the property passed to John. William was mentioned in his father’s will, but was living overseas in 1619.

Augustine was counted amongst the minor gentry of Leicestershire and he claimed kindred with the knightly family of Chester, the owners of Royston. These pretensions were admitted by one of the heralds who drew up the pedigree, but this does not have seem to have been officially sanctioned as it does not appear in the original Visitation of the Royal College of Arms, although the heralds of that period were satisfied with scanty evidence of relationship when their fees were paid, and it was proved, without question, that the Chesters of Blaby came originally from Hertfordshire.

Augustine Chester married Phoebe Michell in All Saints Church, Blaby in October 1599. They had at least nine children, three of whom were named Leonard. Four of their children, including two of the Leonards, died in infancy. The plague returned to Blaby and during 1626, there were 83 burials in the village (one-third of the population). Augustine and Phoebe died that year, along with their sons Clement (24), Leonard (9), daughter, Amy, (12) and William. They all passed away within three weeks. Phoebe was the first to die and was buried on 24th May 1626. Her sons Leonard and William were buried on 5th June. Clement and his sister Anne were buried on 8th June. Augustine was buried on 14th June. He must have known that he had the disease whilst Phoebe was dying for he made his will during this time. It was an informal document, a request to his son Charles, who took the estate under his grandfather’s will after Augustine’s death. When Charles (born 1599), died in 1641, his son was only 12 years old and was deemed to be too young to manage his affairs. Thus the main Chester line died out in Blaby.

Sampson Chester was brought up in trade, being apprenticed for seven years from 1606 to John Gilbert of Holborn, Merchant Taylor of London. Sampson was admitted to the freedom of the Merchant Taylor’s Company in 1615, when he set himself up in business in the parish of St.Anne’s, Blackfriars.

In 1617, Sampson married Frances Tough in London. Their four children, Margaret, Joanna, John and Abigail were born there between 1618 and 1623. Unfortunately, Sampson died in 1625. His widow re-married twice: to Thomas Smith, who died in either 1627 or 1628 and to Edward Stebbings in 1629. There were two daughters from this third marriage. The Stebbings family emigrated to New England. Edward went first, followed in about 1636 by his wife and two daughters, after the death of 13 year old Abigail. The other three Chester children were left behind in London, and probably never saw their mother again.

Edward made the trip to New England in 1633, perhaps with other followers of the Puritan, Rev. Thomas Hooker, who called him, “My cousin Stebbings”. They both took the oath of allegiance in Cambridge, Massachusetts at the same time and in 1636 journeyed to the new settlement of Hartford on the Connecticut River. In her will dated 1670, Frances remembered the son she’d left behind in the Old World, bequeathing the sum of £24 to, “John Chester, now living in or neere unto London”.

John Chester of Blaby was probably better off than his brother Augustine as he inherited his father’s lands in Hertfordshire as well as his mother’s estate in Blaby.

In 1609, he married Dorothy Hooker, the sister of Rev. Thomas Hooker. Dorothy and Thomas were both born in Marefield, Leicestershire. Marefield was, and still is, a very small hamlet with a population of about 20 people. St.Peter’s parish church at Tilton-on-the-Hill served the spiritual needs of the people of the tiny hamlet, yet small as it was, Marefield has had a much greater impact on the affairs of the world than its size would seem to justify, (ref. Rev. Thomas Hooker and the founding of Hartford, Connecticut).

When John died in 1628, he left two children: Leonard (1610) and Elizabeth, (1624). His will left to his wife, Dorothy,
“…all my messuages and lands in Blaby, to enjoy the rents for her own use until my son Leonard     attains the age of 24 when he is to have them fee simple subject to my wife’s dower. But if     Leonard dies without issue before attaining 21, then my wife is to have the lands for her life. In the     meanwhile my wife is to pay my son Leonard 6 pounds 13 shillings and 4 pence every year at     Michaelmas until he attains 24. My wife is also to pay the same amount every year at Michaelmas     to John Chester, son of Sampson Chester deceased until my son Leonard attains 24: and then     my said son Leonard is to pay 50 shillings every year at Michaelmas to George Chester during his     life. But if Leonard dies without issue  before 21, then the person to whom my land shall come is     to pay to the said John Chester £10 a year during his life.”

There was no mention of Leonard’s sister, Elizabeth, in John’s will, so it must be assumed she died as an infant, before the death of her father.

In 1632/1633, while King Charles I was on the throne, Leonard and his mother, Dorothy, disposed of much of their property in Blaby and travelled to New England.

It’s not known why Leonard and his mother emigrated. They lost many family members to the plague and in the 1620s there were bad harvests and much distress, particularly in the woollen industry which impacted on Leicestershire trade and its reliance on sheep farming. The ‘Puritan factor’ must have been an added and strong reason to seek a new life. Dorothy’s brother, Rev. Thomas Hooker was active in the Puritan movement and in the troubles that would eventually lead to the English Civil War. Their sister, Anne Alcock and her husband George were already there, having sailed to the New World in 1630.

There is no trace of Dorothy after she landed until 1639 when she is listed amongst the Founders of Hartford, Connecticut, as an “original proprietor”. Her brother, Rev. Thomas Hooker had settled in Hartford in 1636.

Leonard is recorded on Watertown, Massachusetts with his wife, Mary. Their first child, (Captain) John was the first child born in the settlement (1635). In 1635/1636, Leonard left Mary in Watertown while he journeyed to Wethersfield, Conn., where he is remembered as one of the settlement’s founders.

This is not where the Chester family’s stories ended…they continued in the New World.

(*) The arms of the Chester family were ermine a chief sable with a griffon passant argent therein.

About the Author: Glenise Lee