Home » Articles From The Community » The "Conference State"

The following excerpt is from the article published in the Autumn 2005 issue of Hog River Journal (now called Connecticut Explored).  Here is the link to the entire article.
Call it what you will: an alliance, a coalition, a pact, a conspiracy. In 1780 the French army arrived in Newport , Rhode Island with a goal: knock the British off their high horse.

France ‘s decision to assist the struggling Continental Army was predicated on the belief that helping the Americans win their independence was a way to cripple Great Britain . But the French army would have to cross Connecticut to achieve that goal. For its role as a central location for plotting how and where the French and Americans would confront  the British, the Constitution State could well have been called “The Conference State.”

Though no major battles were fought here, Connecticut played a central role in the French/American alliance, both literally and figuratively. Located between Newport and the Continental headquarters in what is now White Plains, New York, Connecticut would prove to be a convenient place to stop on journeys to or from Newport to Phillipsburg (then on to Yorktown, Virginia) and, later, from Yorktown to Boston. 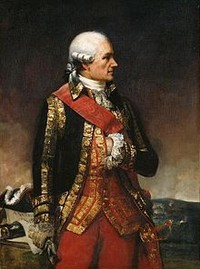 General George Washington met his French counterpart, comte de Rochambeau, for the first time at the Hartford home of Jeremiah Wadsworth. Less than a year later, at Joseph Webb’s house in Wethersfield , Washington made his  case for a joint offensive on the British forces holding New York City . Lebanon would host a French cavalry unit during a long winter as Washington and Rochambeau debated strategy. Other Connecticut residents active in the quest for independence included Lebanon ‘s William Williams, who signed the Declaration of Independence, and Governor Jonathan Trumbull, known to Washington as “Brother John.”

The battle that ended the Revolutionary War ultimately was won not in New York but in Yorktown , Virginia , on October 19, 1781. But those early conferences in Connecticut brought together two pillars of the military world: it was here that they met face to face and planted the seeds of lifelong, mutual admiration.