The founding of Kewanee [Illinois] in 1854 at its present location is the result of two separate developments: the establishment of the colony of Wethersfield [Illinois] and the building of a railroad–and the failure of those two to come together. 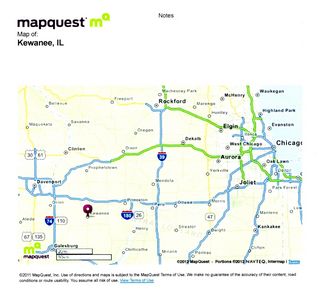 (Please click on the map to see a larger image)

Wethersfield [Illinois] was founded in 1836 by the Connecticut Association of Wethersfield, Conn.  Led by Rev. Caleb Jewett Tenney of Wethersfield, the association was one of several Protestant organizations that established colonies in Henry County (also Andover and Geneseo).  Col. Sylvester Blish and Elizur Goodrich were sent west in 1836 to purchase land and later that year Rev. Joseph Goodrich, John F. Willard and Henry G. Little came to lay out the village of Wethersfield.  Settlers followed in 1837 and the village grew to over 500 by the early 1850’s when the builders of the Military Tract Railroad decided that the route of their line through Henry County would bypass Wethersfield almost two miles to the north.  The decision was apparently based on the adverse terrain immediately west of Wethersfield.  Once the northern route was determined several Wethersfield entrepreneurs purchased land to the north of Wethersfield, gave right-of-way to the railroad, and when the location of a depot was determined laid out the beginnings of a city in 1854.

Before the railroad arrived most of the land that would become Kewanee was a farm owned by brothers Matthew and John Potter.  They built a house just north of what would be the corner of Main and Second Streets in 1850. The Potters apparently wanted to be farmers rather land developers and they traded their farm to several Wethersfielders for farmland in Wethersfield Township.   (In 1903 when the current owners decided the Potter house was standing in the way of progress, it was given to the Daughters of the American Revolution who moved the building to its current location on Park Avenue where it is used as the DAR’s chapter house.)

Two of the buyers of part of the Potters’ farm, George Morse and Silas Willard, acquired land north of the railroad line on what would be Main St. and in 1854 built the “Pioneer Store,” Kewanee’s first store.  Buyers of the rest of the Potters’ farm included Capt. Sullivan Howard, Henry G. Little, Ralph A. Tenney, Nelson Lay, and Col. Sylvester Blish (all Wethersfielders except Lay who moved here from Wisconsin).  Town lots were surveyed early in 1854 and a plat filed with the county on May 1, 1854.

The city’s founders named their new town Berrien, after the chief engineer for the railroad.  When he objected and recommended another name, Kewanee became the name of Wethersfield’s neighbor to the north.  “Kewanee” is believed to be the word used by Winnebagos for “prairie chicken.”  Berrien apparently saw many of the birds in the course of his work through this area.  A post office was established in 1854.  The first postmaster was Col. Blish, who also had been Wethersfield’s first postmaster.  The name of Kewanee for what was still an unincorpoated village was made official by an act of the Illinois state legislature on Feb. 14, 1855.

Kewanee practically sprang up overnight as many Wethersfielders literally picked up their homes and businesses and moved them one to two miles north.  By 1860 there were about 1,500 people in Kewanee.  Wethersfield’s development, meanwhile, was stunted by the loss of many of its leading citizens, including founders of the colony.  Wethersfield would remain a residential area and would eventually annex itself to Kewanee.  In 1921 overwhelming votes in both Wethersfield and Kewanee approved the annexation.  (While the cities merged in 1921, the two school districts remained separate.  There are also two separate townships–Kewanee and Wethersfield.)

Kewanee grew steadily but gradually from 1860 to 1890.   Economic activity was led by marketing and retailing for the farming community, brick-making, extensive coal-mining and a burgeoning steam boiler industry.  The latter was pioneered by William Haxtun, who purchased a tiny company in 1875 and by 1890 employed 1000 persons in the Haxtun Steam Heating Co. In 1890 the population was 4,569.  Then in the 1890’s the city grew considerably after the Haxtun company split in 1891 into Western Tube Company and Kewanee Boiler. The 1900 census showed 8,382. The next major growth period and the last for Kewanee was the decade of World War I when virtually all Kewanee factories were busy with war work.  The population climbed dramatically from 9,307 in 1910 to 16,026 in 1920.  Annexation in 1911 of residential areas east, north, and west contributed to the growth spurt.

Politically Kewanee has employed all four types of city government available to a city in Illinois.  In 1867 Kewanee was granted a charter for village government that included a five-member board of trustees with one of them chosen as village president.  In 1897 Kewanee received a charter as a city and adopted the mayor-council form of municipal government with an elected mayor and 8-member city council.  In 1911 during the Progressive Era Kewanee voters chose to switch to the commission form of government with each of the five commissioners (including one who was elected mayor) supervising one or more city departments.  In 1986, after two unsuccessful referenda, the voters chose the council-manager form of city government.  It continues today with a council of five members, including a mayor; they appoint a city manager to supervise the operations of the city administration.

While Kewanee as a whole has declined considerably in population since World War II, the “Wethersfield” portion of the city has actually grown, both numerically and commercially.  From the late 40’s to the early 70’s almost all of the new housing development was south of Division St., on both the southeast and southwest corners of the city.  After a 20-year “depression” in home building, new houses are being built in the latter half of the 90’s, still mostly in that portion of Kewanee that is in Wethersfield Township. The retail business center of the city has moved from downtown, where it thrived for a century, to the south side, a movement that began in the 60’s and was especially boosted in the 1970’s by converting the Main St.-Tenney St. corridor from two lanes to four lanes.  The building of Midland Plaza in 1970 and Wal-Mart in 1984 were major events in the business drift to the south.

The following  four-page history of the founding of Wethersfield, Illinois in 1836 is from “Portrait and Biographical Album of Henry County,” Chicago:  Biographical Publishing co., 1885 and was provided by the Kewanee Illinois Historical Society.

Please click on the pages to see a larger print version. 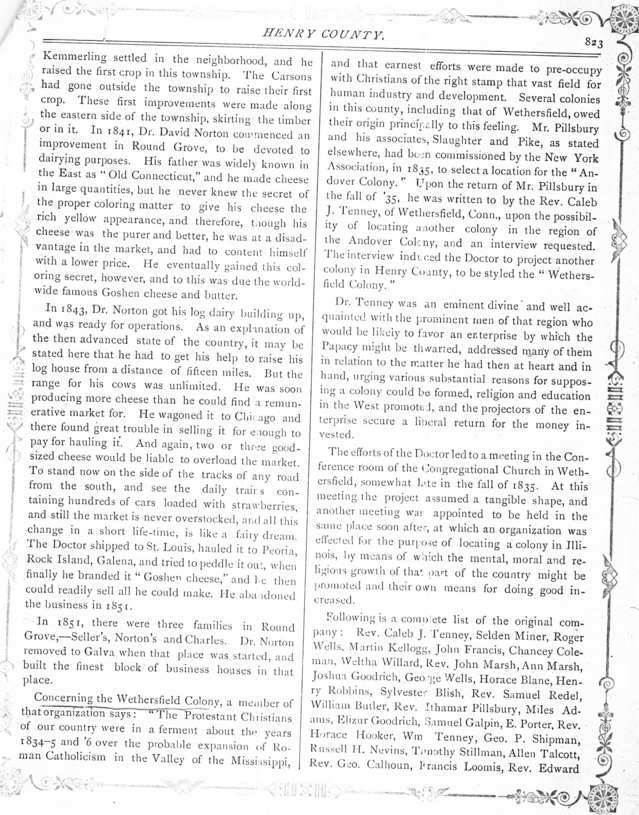 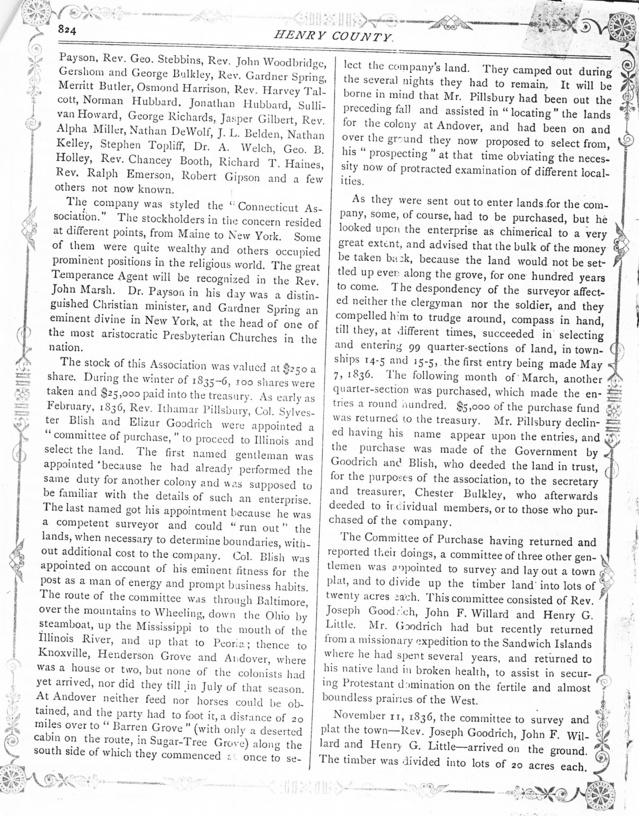 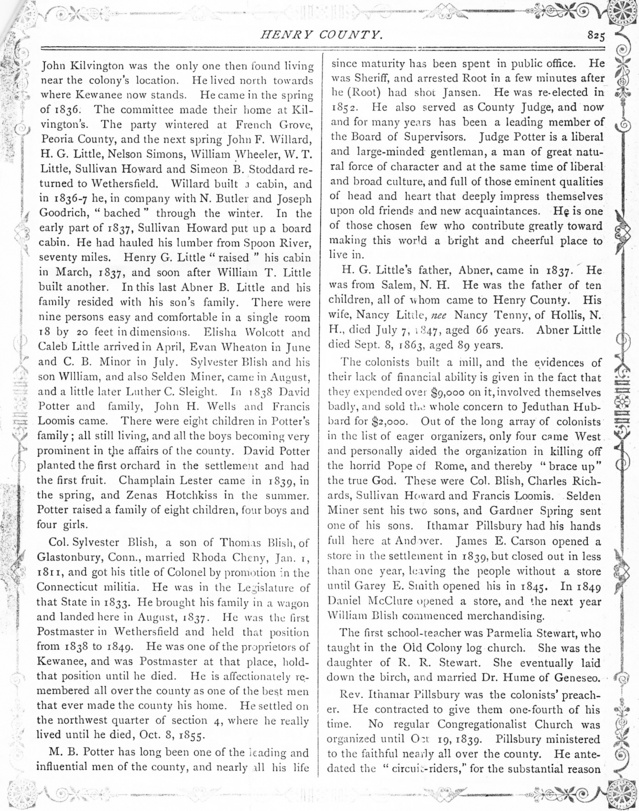 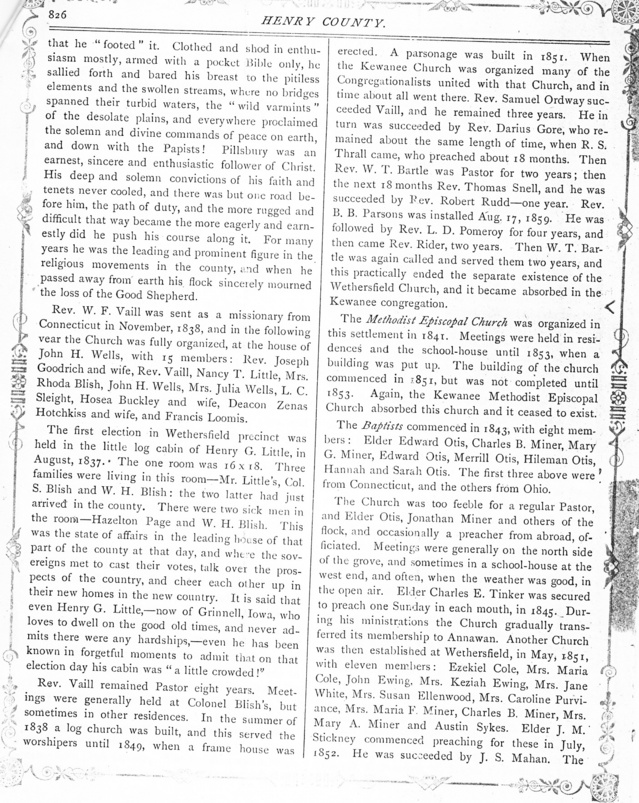 About the Author: Larry Lock