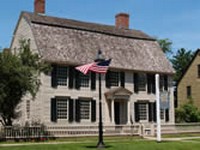 As long as it shall stand, the Joseph Webb house on Main Street in Wethersfield will be firmly linked to the name of George Washington. Fewer people know, however, that when Washington was inaugurated as the first president of the newly created United States of America, the Bible upon which he took his oath was held by one of Joseph’s sons, Samuel Blachley Webb.

Born in Wethersfield on December 13, 1753,  Sam was the third of six children of prominent merchant Joseph Webb, Jr. and his wife, Mehitable. Samuel was only ten years old when his father died, probably of consumption. Two years later, Mehitable married Silas Deane, who became stepfather and advisor to the six young Webbs, and came to play major role in young Samuel’s life.

Little is known about his childhood, but during his late teens, Sam  took a voyage to Jamaica, probably to learn about the family trading business. His many letters to his brothers and sisters are lively and affectionate, in which he described his enjoyment of attending balls and coffee houses with friends.

Sam was more privy than most young men to the events leading up to the War for Independence. He was close to his stepfather, and when Deane was appointed to the First Continental Congress, he brought “Sammy” to Philadelphia to serve as his secretary. This exciting opportunity to meet the important men who engaged in sowing the seeds of war would serve Sam well once hostilities broke out. 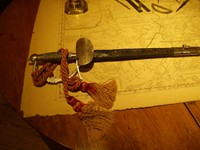 Sam was a member of the Wethersfield militia, and when he learned about the Battle of Lexington, the twenty one year old joined the 2nd Regiment Connecticut Infantry as a lieutenant, thus initiating a military career filled with adventure. He first saw action at Bunker Hill, where he was wounded in the head.

His commendation for gallantry led to promotion to Major and appointment as Aide de Campe to General Israel Putnam. Sam’s detailed eyewitness account of the Bunker Hill battle, written in a long letter to Deane, is now in the collection of the Connecticut Historical Society. In it, Sam recalls,”For my part, I confess, when I was descending into the valley from Bunker’s Hill, side by side of Capt. Chester at the head of our Company, I had no more tho’ts of ever rising the Hill again, than I had of ascending to Heaven as Elijah did — soul and body together. But after we got engaged — to see the dead and wounded around me — I had no other feeling but that of Revenge. Four men were shot dead within five feet of me; but, thank Heaven, I escaped with only the graze of a musket ball on my head.”

In 1776, Sam, now Lieutenant Colonel, became Aide de Campe to General George Washington, who described him as “the most accomplished gentleman in the army.” While in New York, he refused to deliver a couple of letters from Lord Howe, which addressed Washington as “Esquire” rather than “General”.

Sam fought at the battle of White Plains, where a musket ball passed through his leg and killed his horse. He participated in the crossing of the Delaware, and was wounded again in the battle of Trenton. Washington gave Samuel a furlough to return to Wethersfield, to direct and finance  the raising and organization of the 9th Connecticut Regiment, soon to become known as “The Decoy Regiment”, because they were clothed in captured British uniforms. Colonel Webb assumed command in 1777, and joined General Samuel H. Parsons’ ill fated expedition to Long Island, where the British captured Sam and many others as prisoners of war.

As a prisoner, Colonel Webb worked to devise an agreement between the Americans and the English for a general exchange of prisoners, a problem that had yet to be settled between the two adversaries. As an officer, he was granted parole, which required him to swear to refrain from acting against the interests of the King, and him a modicum of freedom. During this interim, he married Elizabeth Bancker.

After three long and frustrating years, Sam was formally released, upon which he returned promptly to Washington’s staff. Soon afterward, he immersed himself in arranging with his brother Joseph for Washington’s historic planning meeting with Comte Rochambeau.

This momentous event, today known as the Yorktown Conference, took place on May 19, 1781, at Sam’s childhood home in Wethersfield. Colonel Webb also assumed command of two regiments of light infantry, stationed near general headquarters at Newburgh. He absented himself from his troops only to pay a visit to his wife, who was suffering ill health at home in Wethersfield. The journey took a month, and shortly before Sam arrived, Elizabeth died in childbirth, followed within a few days by her infant.

In 1783, Samuel was appointed Brevet Brigadier General, continuing in service until the War for Independence ended late in that year. Following the war, Sam took up residence in Manhattan, which was soon to become the capitol of the new nation, and where he was regarded as one of the most elegant men of his day.

One of his more colorful experiences involved a duel, alluded to in his private papers.  The circumstances are not clearly documented, but apparently William Livingston, Jr., fellow officer and friend of Sam, made some comments at which Sam took offense. A duel with pistols at a distance of ten paces was arranged, to take place at Powle’s Hook, now a section of Jersey City. The sketchy details indicate that Sam fired first and missed, whereupon Livingston fired into the air. The adversaries shook hands. Livingston stated that he never made the offensive comment, and the two parted friends, happy that the affair had been honorably settled.

Sam maintained his friendship with George Washington in civilian life, particularly after Washington took up residence in New York.  Both were founding members of the Society of Cincinnati, which included such luminaries as Henry Knox, Freidrich Von Steuben, Jonathan Trumbull, and Jedediah Huntington.

1789 was a remarkable year for both Webb and Washington. Washington’s first presidential inauguration took place at Federal Hall on Wall Street, with Sam officiating as Grand Marshall, and, as noted above, holding the Bible upon which the new president took his oath of office. In a letter Sam recounted, “I accompanied the President from his lodgings to the Senate room, from thence to St. Paul’s Church and back to his House, thro’ the surrounding shouts of Joy, of the greatest concourse of citizens, that I ever beheld.”

The following year, Sam courted Catherine Hogeboom, of Claverack, New York, daughter of one of his business associates. “Caty”  became his second wife in September, and they would take up residence on Catherine’s family estate along the Hudson River in Claverack,  establishing a close-knit family that included nine children.

By all accounts, his was a happy marriage, and he often expressed deep satisfaction in his personal life.  Sam appears not to have taken up any specific occupation or business; rather, he spent the next twenty years in various mercantile and speculative ventures, including land purchases and sales, and often took business trips to New York and Boston. He kept in close contact with his  brothers, sisters, and in-laws.  He also became deeply involved in resolving the serious financial problems of his brother Joseph, and his half-brother, Jesse Deane. 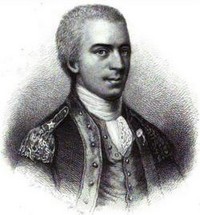 Samuel Blachley Webb died on December 3, 1807, a few weeks before his 54th birthday. He is buried at the Dutch Reform Church in Claverack.

Throughout his life, Sam wrote voluminously, leaving for posterity a vivid, first hand account of the history of his country as it played out in his presence.

As described by his son,”From the day he marched from Wethersfield to take part in the battle of Bunker Hill, and for years previous, he never failed, except from illness, to write up his journal of the day. He rarely destroyed a paper; and the accumulated records, embracing the entire period from 1774 to 1784, filled two monstrous chests, not less than five feet long and of proportionate width; and every scrap of paper, in this great mass of manuscript correspondence, journals and accounts, was as accurately and carefully filed, as are the archives of any court of record.”

Some of that material appears in The Reminiscences of Samuel B. Webb of the Revolutionary Army, by James Watson Webb. In addition, Sam’s personal correspondence fills three volumes, published as The Correspondence and Journals of Samuel B. Webb, by Worthington Chauncey Ward. Both of these works are available in digital format, free of charge, from https://play.google.com/store/books/details?id=B_U_AAAAYAAJ . W. C. Ward also compiled  Webb’s personal correspondence, available in digital format, under the title Family Letters of Samuel Blachley Webb at https://archive.org/details/familyofblachley00webbrich .

About the author: Linda Pagliuco

EDITOR’S NOTE: Edward G. Lengel, Ph.D., Editor-In-Chief of the Washington Papers Project and Professor at the University of Virginia was consulted via email regarding the subject of the meeting at the Webb House.  His reply: “They could not have planned Yorktown at the [Webb House] meeting since Washington didn’t know yet that he was going there. Rather, they discussed their strategic options, with Washington most insistent on attacking New York. Rochambeau complied with that objective for the time being, though of course it didn’t turn out that way (as the Frenchman probably knew it would not). That’s of course a very quick answer, but it would definitely be incorrect to say “the campaign at Yorktown was planned at that meeting.”  Dr. Lengel is the author of “Inventing George Washington: America’s Founder in Myth and Memory,” published in 2011 by Harper.