Home » Articles From The Community » The Story of Connecticut’s Italians

An 1868 article in the New Britain Record matter of factly reported “a few Italian musicians parading the city’s streets.” The newspaper’s comments signaled the presence of a new immigrant culture, even though only 117 Italians lived in the state then and a mere 879 a decade later. Few could have anticipated the dramatic increases in Italian immigration to Connecticut over the next four decades.

As the nineteenth century ended, thousands of Italians entered Connecticut from small Italian villages, especially south of Rome. The Sicilian towns Catania, Mellili, and Siracusa and mainland towns Abruzzi e Molise and Calabria were common points of departure. Job opportunities across the Atlantic attracted them as this immigration coincided with America’s most intense period of industrial growth. They settled in Connecticut’s urban centers of Bridgeport, Hartford, New Britain, New Haven, and Waterbury. Others inhabited smaller cities including Middletown and Stamford. 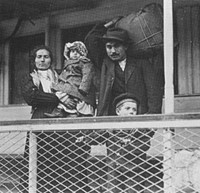 The beginning of the twentieth century brought an intensification of Italian immigration nationwide. Connecticut’s Italian immigration increased proportionally. New Haven, the state’s largest Italian colony, had more than 13,000 in 1910; Waterbury was second with just over 9,000; Bridgeport ranked third with nearly 9,000; and Hartford fourth with about 7,000. Italians also formed sizeable communities in New Britain, Middletown, and Stamford.

Unmarried young men constituted the most numerous group within the state’s Italian population. They entered into marriage slowly but then had children quickly. The second-generation multiplied. New Haven again would rank first with more than 27,000 Italian American children in 1930; Waterbury would have about 14,500; Bridgeport’s total would surpass 13,000 and Hartford’s 12,000 by the same year. 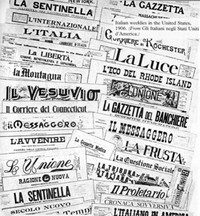 Prominent New Haven Italians organized La Marchegiana, La Fratellanza and La Marineria societies, just three of the more than 80 such institutions there. Seventeen Waterbury Italian civic associations organized a festival for Columbus Day in 1910 and annually funded festas (feasts) honoring one patron saint or another. The Siracusani Society and The Italian Mothers’ Club were two of many well-known organizations in Hartford as were The Star of Italy Club and The Calabria Society in New Britain. Connecticut’s Italian elite acted as liaisons between the state’s Italian enclaves and society generally. They took it upon themselves to project the face of their communities by reporting uplifting news coming out of Italian neighborhoods. Italian newspapers inundated their pages with noteworthy events that associations organized including all-night banquets, music concerts, festas, christenings, marriages, and Columbus Day celebrations.

Indeed, Columbus held a special place in the hearts of Connecticut’s Italians. In the early twentieth century, the explorer stood as a towering figure whose connection between the Old World and the New, between Italian and American culture made Italian residents bristle with pride. Columbus brought their communities respectability, something they could lay claim to, in an era of great antagonism toward them. Connecticut’s Italian press called him “the first immigrant.” The middle-class built statues honoring and created placards commemorating him.

Try as they might, however, the prominenti failed to counteract the powerful stereotype that Italians were criminals. Practically all Connecticut Italians were law-abiding citizens. Yet a small, visible minority was apprehended for unlawful activity including burglary, kidnapping, and murder. Typically, they committed crimes against their own members. Occasionally, Italian crime occurred in the form of La Mano Nera (The Black Hand), a notoriously violent organization consisting of an admixture of gangsters, extortionists, and assassins. By 1920, the Connecticut State Prison, located where the Department of Motor Vehicles now stands in Wethersfield, Connecticut, held more Italians than all other ethnic groups combined. Whenever the Italian elite reminded Connecticut of Columbus, “the Discoverer of America,” English-language newspapers ran stories such as that of Bridgeport’s George Columbo, sentenced to hang in the state prison for murder. Law enforcement undoubtedly targeted Italian men, but youth, poverty, and an inability to adjust to a foreign land contributed to their illicit behavior.

Italian crime made Connecticut Yankees recoil in horror. They wrote editorials about Italian “deeds of ill-repute” and their “unassimilable” nature. Another pejoratively called them the “swarthy sons of sunny Italy.” The staunchly anti-immigrant American Protective Association formed a chapter in Connecticut largely in response to this foreign criminal element. The Hartford Chat Magazine referred to popular songs written in the late nineteenth century denouncing Italians for their criminal tendencies.

That Connecticut Italians were Catholic also preoccupied the nutmeg state’s Protestant majority. With the exception of Irish Catholics, very few other ethnic groups challenged the religious hegemony of New England Congregationalism. As Italians built churches such as New Haven’s Saint Michaels and Bridgeport’s Holy Rosary Church, Protestants found another reason to dislike them. Even within the Catholic community, conflict arose in church pews between established Irish Catholics and incoming Italians. Sermons were often given in English, thereby arousing the ire of Italian churchgoers who could not understand them. Sometimes this religious conflict spilled into city neighborhoods where Irish and Italian youth gangs clashed, an unfortunate turn of events that contributed to the I
talian criminal label.

Connecticut’s Italians also proved themselves in the next decade when World War One raged through Europe. Thousands signed up for duty and expressed their loyalty to America. In 1917, the Daughters of the American Revolution sponsored a series of lectures in Connecticut voicing apprehension that the foreign-born had not “Americanized” quickly enough, but the presence of large numbers of naturalized Italian immigrants and Italian-Americans in the armed forces undermined the nativist organization’s claims. New Haven’s leading Italian newspaper exhorted its readers throughout the state “to remain loyal to the fatherland, but to do one’s duty in America too.” Many heeded the newspaper’s call as the 21 Italian names out of 194 on a bronze wall in Waterbury’s city hall foyer demonstrate. New Haven and Stamford Italians also participated significantly in the Great War. New Britain Italians even formed the Nicola Bernardino Post, named after the war’s first Italian American casualty.

The 1924 anti-immigrant quota laws ended the steady flow of Italian and other immigrants entering the state. By then, the second-generation embraced the consumer-driven prosperity the First World War had unleashed. More of the state’s Italians became educated in public schools, purchased real estate, entered the middle class, and demonstrated to residents of the “land of steady habits” that Italians could be good Americans while preserving their ethnic identity.

Despite the initial tension created by the early support for Benito Mussolini in Connecticut’s Italian communities during the Second World War, they demonstrated their loyalty to America as they had in World War One. Italian Americans from the state signed up for the American war effort in larger numbers than in the 1914 to 1918 conflict. The war also brought renewed and unprecedented prosperity to Connecticut’s Italians.

As the immigrant generation passed and more Italian Americans became prosperous, the hostility toward them began to dissipate. Italian American doctors, lawyers, teachers, and social workers were now too many to be ignored. The Hartford Times boasted in the 1940s that more than 200 thousand Connecticut residents claimed Italian as their mother tongue. “Italians smelled of garlic” had been a derogatory saying frequently spoken at the start of Italian immigration. By the middle of the twentieth century, however, Connecticut residents of many ethnic stripes frequented Italian pizzerias and other eateries where they enjoyed the scent of garlic wafting through the air.

When the Waterbury Republican in 1957 hailed Connecticut’s Italians as “the most progressive of the foreign-born,” few contradicted the statement or recalled the volatile early years. And 15 years later even more progress could be reported. The name George Columbo had been replaced in the consciousness of Connecticut residents by the 1970’s television crime drama Columbo and few took note of the character’s ethnicity. The irony that he was a detective also passed unnoticed as viewers considered it incidental to his ethnicity.

More recently, Connecticut’s Italians earned the state’s respect and admiration, though they still found it difficult to escape the stubborn stigma of gangster that the 1970’s Godfather films and the recent HBO series Sopranos depicted. Italian American organizations throughout Connecticut protested loudly, but the stereotype no longer seemed to pierce like it once had. Perhaps it was because positive developments–notable events such as the elections of Ann Uccello, the first woman to become mayor of Hartford, and Ella Grasso, the nation’s first woman to become governor in the United States who was not the wife or widow of a male governor–overwhelmed the persistence of negative images.

As the twentieth century’s end approached, Italian achievements continued unabated and permanently closed the door on the weary past. A century earlier, a famous Italian quotation had read: 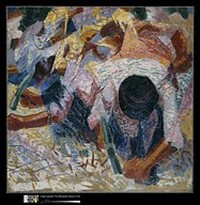 (The Street Pavers by Umberto Boccioni)

Ethnic groups commonly express such disappointment in the initial adjustment period in a new land. Now the amplified declaration of one Waterbury Italian reflected optimism and pride: “The Italians that came to this country from the first of the century to 1920– we built America.” The revival of the Italian festa throughout Connecticut since the 1970s served the same purpose.

Today, Connecticut Italians have moved to affluent suburbs including Guilford, Fairfield, Rocky Hill, and Wethersfield where they quietly keep their heritage in tact. Nearly one-third of Connecticut residents claim they are either exclusively or partly Italian, a higher percentage than any other state in the nation. In other words, the large influx of Italian immigrants to Connecticut between the 1890s and 1920s continues to impact the state’s ethnic composition. In Connecticut as with America, ethnicity still matters notwithstanding the semi-mythological story of the melting pot.

Roger Daniels, Coming to America: a History of Immigration and Ethnicity in American Life (Princeton, NJ:1990)

A version of this article was commissioned for the Encyclopedia of Connecticut History Online currently under development by the  Connecticut Humanities Council.

About the Author: Rafaele Fierro