The first lay-out of lands was for mile-wide a strip of land on the west side of Wethersfield up against the town line with Farmington. The “Mile-in-Breadth” was approved in 1670/1 and divided to all householders equally. Later distributions of land now in Newington include the Sawmill Lots, the Rev. Mr. Woodbridge’s Division, and the Second General Division, the latter in 1693/4. Among the people appointed to determine the lots in Second General Division were Capt. Robert Welles, Sgt. Jonathan Welles, and a Treat, a Stoddard, a Curtis and a Chester. They reported their decisions back to the town in 1695.

Once descendants had settled on those lands, the next step was the establishment of a church. Those people whose farms were so far from downtown Wethersfield had found that that weekly trips over the mountain for church-going were too much, especially in the winter. The first request for a parish was in 1708 and it was granted in 1709 for the winter months of December, January, February and March. By 1712 the residents were petitioning for a permanent church in Newington. The charter for a church was granted in 1713. It was at first called the West Society of Wethersfield but by April 1718 was already named the Newington Society.

It got off to a slow start. It took a long time to get a church edifice built. It wasn’t until 1722 that the church invited its first minister, the Rev. Elisha Williams. He served as minister for four years, until he became rector at Yale College. The next minister was the Rev. Simon Backus who served for twenty years. Newington Society continued as a parish within the town of Wethersfield for over 150 years.

Henry Stiles, in his History of Ancient Wethersfield, speculates that family ties between Newington and Wethersfield families kept the parish within the town of Wethersfield for so long. Stiles acknowledges that the roads over the mountain were “stony and deep” and that the roads along the valleys were muddy. Nevertheless, Newington residents put up with these conditions until the railroad came through in 1870. Newington was now connected directly with towns such as Hartford and Saybrook.

In early April, 1871, town members pushed to request the state legislature, in its May session, to incorporate Newington as a separate town. Roger Welles won this vote, as he was one of the nominees of both the Republican and Democratic parties. The measure, written by Roger Welles himself, passed and was signed into law by the governor on 10 July 1871. One hundred and fifty years after it was first established as a parish, Newington was now an independent town. 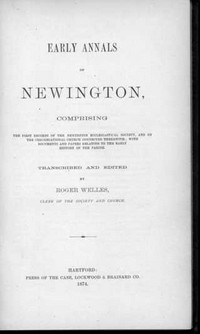