Home » Articles From The Community » The Wethersfield Meteorites

“We’ll  take the house. Honey, the chances of another plane hitting this house are astronomical. It’s been pre-disastered. We’re going to be safe here.”

Such was the logic of T.S. Garp in the John Irving novel, “The World According to Garp” immediately after a single-engine prop plane crashed into the side of the residence he and his wife were considering purchasing.

The Hartford Courant ruminated “Why should Wethersfield, not particularly famous for anything but onions, have two houses hit by meteorites in such a brief period, when only 11 buildings are known to have been hit anywhere in the world in the past 135 years?”

“The unlikeliness of the event is enough to give credence to the theory of a radio astronomer at the Harvard Smithsonian Center for Astrophysics.  He thinks that extra-terrestrials are trying to get a message through to us, but we’re too thick to comprehend.”

“Perhaps, in an intergalactic equivalent of throwing rocks with messages attached through windows, they are hurling meteorites through roofs in Wethersfield.” 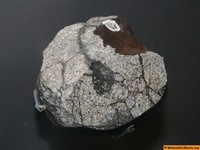 The first meteorite, Wethersfield (1971) as it is officially known, struck the house of the Paul J. and Minnie Cassarino family on 341 Middletown Avenue early on a Thursday morning.  The Cassarinos were sleeping and, surprisingly, were not awakened by the noise of the space rock passing through the roof of the house and lodging itself into the ceiling sheetrock of their second floor apartment.

When he got up a 6:00 a.m. to go to work, Paul Cassarino noticed the living room floor cluttered with broken plaster and dust and saw the meteorite embedded in the ceiling insulation.  He pulled it out with his hand, put it on the floor and went to his job at Capewell Manufacturing.

A concerned Minnie Cassarino called her son Michael who came over and picked up the mysterious rock with his handkerchief.  Police and Civil Defense officials were called to the scene.  The unexpected object was scanned for radiation with a Geiger counter.  The level of radioactivity was acceptably low.  Several of Mr. Cassarino’s co-workers expressed doubts about the whole story and Mrs. Cassarino suspected vandalism.  It was however an authentic meteorite and within a week the Cassarino’s were visited by Richard E. McCrosky and Charles Tougas of the Smithsonian Astrophysical Observatory in Cambridge, Mass.

The pair of astronomers was most interested in finding any other pieces of the meteor that survived the trip to earth.  They said that in the previous year, 1970, only six meteorites were found soon enough after falling to the ground to be of help in their studies.  “There are usually many pieces to a meteor,” said McCrosky.  In some meteor showers there could be thousands of pieces.  However they searched the empty fields in the area of the Cassarino home without any luck.

“From pieces of meteorite the astronomers say they can determine what effects re-entry into the atmosphere can have on man-made missiles, plus much information which right now has no practical application.”

“‘It’s hard to give people a practical reason for all of this,’ said McCrosky, ‘but some day it will pay off.  Remember the transistor and the laser beam didn’t come out of necessity but from pure science.”

One thing that was determined, although not by the scientists, was that the crashing meteorite did not contribute to the death of a truck operator on Route 84 in West Hartford at about 5:30 a.m..

It had been theorized by Charles R. Hammond (adjunct professor of Astronomy at Trinity College) that the flash of light might have blinded the driver.   But a woman driving behind the truck at the time of the accident said that she had not seen any flash of light.  There were however other reports of a strange light around 5:30 a.m. as well as sightings earlier than the 5:00 to 6:00 a.m. time frame.

The Cassarinos ultimately sold the meteorite to the  Department of Mineral Sciences, Division of Meteorites of the Smithsonian Institution in Washington.

“Since the event is covered by insurance, somebody in Hartford’s insurance industry probably has figured out the odds against a meteorite through the roof of a policyholder’s house.”

“The odds against a meteorite hitting two homes in the same community with 11 years must be astronomical, something like the odds against the Whalers winning the Stanley Cup this season.”

“But it happened Monday night during M*A*S*H, when a six-pound meteorite crashed through the roof of the home of Robert G. Donahue and Wanda D. Donahue.”

It was the fourth such object ever to land in Connecticut – the other two falling in Weston in 1807 and Stratford in 1978 – and one of only eleven, since 1847, known to have struck a building anywhere in the world.

On November 8th, 1982 the Donahue’s were at home watching television in their Cape Cod style house on 461 Church Street at 9:20 p.m. when the softball-sized lump of rock “crashed through the living-room ceiling, bounced on the floor and then struck the dining room ceiling about 12 feet away before coming to rest on the floor in a litter of plaster. The object punched a hole through the shingles, plywood sheathing, the wire lath that supports the ceiling plaster and the plaster itself.”

This is how the Donahues described the event on the PBS NOVA television program broadcast on April 29, 1997

“WANDA DONAHUE: And I just thought, I don’t want the neighbors to hear about this.

ROBERT DONAHUE: It was a very, very strong force that penetrated the house.

WANDA DONAHUE: We heard this tremendous crash, and we looked up and saw this huge hole. We could see the stars, and. . .

ROBERT DONAHUE: And we just looked at each other and asked a very intelligent question. I asked Wanda and she asked me, “What happened?” It came through the ceiling of the living room, and it bounced from there into the dining room, which was adjacent, hit the ceiling, rolled, and hit the ceiling a second time. . .

WANDA DONAHUE: And then rolled underneath the dining room table, where it was found by a young fireman, one of our volunteer firemen, who came to the house after our call.

ROBERT DONAHUE: Matter of fact, we celebrate each year. We get together for a dinner each year. There are six of us.

WANDA DONAHUE: On the anniversary.

ROBERT DONAHUE: On the anniversary. So, it’s been an important event in our life.

PETER THOMAS: Amazingly, ten years before, another rock fell out of the sky on this house, less than a mile away. The residents of Wethersfield are proud of this distinction.

WANDA DONAHUE: At cocktail parties, we have something to talk about. Nobody can top us.”

Fire and police were called and the police took the object to headquarters but later returned it to the Donahues.  Police Lieutenant John S. Karangekis said that neighbors reported that the “sky lit up” at about the time the object struck.  Dr. David Menke, professor of astronomy at Central Connecticut State University said that the meteorite likely came from the “Taurid” meteor shower that had occurred over the past several days.  Reported sightings came from East Hampton and Glastonbury as well as Wethersfield.

Experts from University of Connecticut, Yale University, Trinity College, C.C.S.U., and the Smithsonian Institute examined the stone.  It was then sent to Battelle Northwest Laboratories in Richmond Washington where it was tested for gamma rays and potassium-argon isotopes.  At the time it was the “freshest” meteorite ever studied  “Wethersfield (1982)” was then returned to the Donahues.

According to Professor Hammond “the object has a thin, black crust that covers a white, grainy interior containing flecks of metal.  The meteorite’s surface as scarred and molded by the tremendous heat of friction as it passed through the Earth’s atmosphere at speeds that may have reached more than 10,000 mph.  It struck the Donahue’s house while traveling at 500 to 1,000 mph.”

Firefighters reported that the stone was cool to the touch.  This was not surprising. A meteor’s temperature as it travels through space is almost absolute zero (459.67 degrees below 0, Fahrenheit) and passage through the atmosphere heats the object to no more than 50 – 60 degrees F.

The meteor was put on exhibit at the Copernican Observatory and Planetarium at Central Connecticut State University and then in 1983 at the Peabody Museum in New Haven where it remains today.

“If you live in Wethersfield, Conn., you know something about long odds. On April 7, 1971, a meteorite crashed through the roof of a house in Wethersfield, giving the occupants a rude awakening and a lifetime of bragging rights.”

“Well, not exactly a lifetime. Another meteor fell on Wethersfield — about a mile from the previous strike — on Nov. 8, 1982, crashing through a roof and lodging in the living-room ceiling.”

On February 15, 2013 a meteorite fell in Chelyabinsk, Russia.  Television station WTNH, which covered the 1982 Wethersfield meteorite, revisited the town.

“The World According to Garp”, John Irving