By Abbie B. Dunn

This article is posted with the permission of The Wethersfield Post where it was previously published.

One hundred years ago “rapid transit” meant the horse railway.  Wethersfield was the first town adjacent to Hartford to have this service.  Before that, the Red Bird Stage which was operated by the Standish brothers served the Wethersfield-Hartford route. 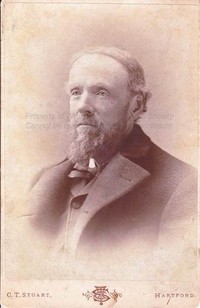 The Hartford & Wethersfield Railway Co. was chartered June 18, 1859.  Of the six charter members two, Silas W. Robbins [pictured] and Henry C. Dwight, were from Wethersfield.  Many of the cars, described as being “lettered and ornamented” in elegant style, were built in Springfield.

There was opposition, as there frequently is, to anything new.  Laying tracks on important thoroughfares was thought to be an obstacle to pleasure driving, which might cause carriages to overturn.

Work on the railway was delayed because of difficulty in getting the iron rails during the Civil War.  Construction of the car barn and stables on Wethersfield Avenue, opposite the present Bulkeley High School, was begun in October 1862. 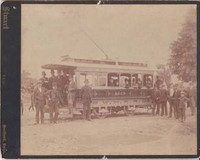 On April 3, 1863, the first cars running from the Old State House to Wethersfield Center started regular service.  The Hartford Courant reported this as “surpassing any other public improvement for many years.”

Two weeks later, three boys were arrested for piling rocks on the track.  They were discharged with a severe reprimand from Judge Gilman.  Older offenders said they would almost rather go to jail than receive Judge Gilman’s lecture.

On June 2, 1863 the travel to Wethersfield was so great that extra cars had to be sent out to take the crowd back to Hartford.  A trip to the country and a visit to the prison grounds were a popular holiday diversion.

Most of Hartford, at that time, was within one mile of the Old State House.  The initial trolley fare was five cents within the city and ten cents to Wethersfield.  This was soon found to be insufficient so in 1867 the legislature passed a bill to increase it to six and twelve cents.  Those who worked on the line considered $2 a good day’s pay.

In winter, large sleighs known as arks were used whenever the rails were blocked with snow.  Private owners of horse drawn sleighs fought the removal of snow from the tracks.  Men and boys would shovel the snow back as fast as it was cleaned off.  One John McDonald was arrested and tined $5 for placing obstructions on the tracks.  During heavy snows, extra horses had to be used, resulting in fewer trips.

An amusing story was reported in the Courant: – An anxious passenger hailed one of the sleights.  “Noah, stop your ark.”  Noah ignored him.  He was hailed again.  Losing his patience, Noah called out, “Come – hurry up – the animals are all in except the jackass.”

In 1872 there was an epidemic of “Horse flu” felling hundreds of horses.  Railways soon realized that they had to search for another source of power.  A bill was then promoted in the Legislature to allow the use of steam power.

The trolley service had to combat floods, snowstorms and hurricanes.  The 1936 flood covered the Commerce Street power plant of the Connecticut Co.  An emergency hook-up brought some power from New Haven.  The 1938 hurricane brought down trees and poles.  High water during spring flooding always covered the tracks at Folly Brook where the Valley Railroad crossed Hartford Ave.

For a while the Wethersfield line had been operated on storage batteries, but this was not satisfactory.  This was one of the first electric lines in the country.  The company decided to experiment by electrifying the three mile route from the car barn to Wethersfield center.  In June of that year, the Wethersfield selectmen signed papers allowing the erection of poles and wires.  On Sept. 2 a trial run was made with 30 celebrities on board, which ran smoothly and eight minutes faster than scheduled.

By the 1940s buses began to replace the trolleys.  “Last night” festivities were held on May 18, 1941 to mark the end of the trolley service.  A large crowd waiting at the end of the line on Broad Street were surprised when the trolley went right through the regular stop.  Pranksters had put out the stop light.  A wrecker got the car back on the track, and it returned to Hartford.

Meanwhile 125 people were attending a celebration at the Grange Hall.  There was a costume contest, dancing, vaudeville acts and a supper.  The group boarded the last car when it stopped in front of the Grange.  They planned to return home on the first bus out of Hartford.

We would like to thank Roger Barrup, Editor of Transportation Bulletins published by the Conn. Valley Chapter, National Railways Historical Society, Inc., for granting permission to use material from Bulletin #77.  Copies of these bulletins are available at the Trolley Museum in Warehouse Point.

About the Author: Abbie B. Dunn