It is was early on a Friday night, May 20, 1955, and Gerard Stewart was dressed up and on his way to a greater Hartford Jaycees function when horns sounded, summoning volunteer firefighters.

In the days before volunteer firefighters had radios or beepers, Mr. Stewart, a member of Wethersfield Fire Department for several years, knew from the number of horn blasts the approximate location of the blaze.

Heading north from Brimfield road, where he lived at the time, “you didn’t have to go very far when you saw the smoke in the air,” he said.

The fire at the Wethersfield Lumber Co. at Jordan Lane and the Silas Deane Highway, would turn out to be the biggest in the town’s history.

The next day the lumberyard fire was at the top of the front pages of both Hartford’s daily newspapers, the morning Courant and the afternoon Times.

“Fire burned the heart out of New England’s biggest lumberyard last night,” began the story by Ralph Minard of the Hartford Times. 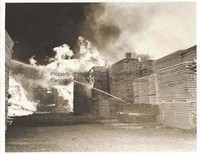 “Feeding on 20-foot high piles of valuable hardwoods as well as pine and hemlock, the blaze engulfed the Wethersfield Lumber Company yard on Jordan Lane near the Silas Deane Highway, south of the Hartford town line.

“In less than three hours it destroyed the two-story brick mill building, devoured several acres of stacked lumber, ate into storage sheds and charred five old trucks used for yard work.  Company officials and firemen were unable to say how the fire started.

“Thousands of Wethersfield residents forgot about supper to watch the seething flames soar 60 feet into the air,” according to the Times.

The Courant reported that the fire drew a crowd that peaked at about 10,000 people, with police from surrounding towns helping Wethersfield Police in detouring traffic around the scene and keeping the crowd from getting too close.

According to the Times, a watchman, John P. Redman, noticed a wisp of flame and some smoke at 6:45 p.m., as he was looking up at the sawdust separator on top of the mill building, which was located in the southeast corner of the lumber company property.

Inside the mill building was a kiln big enough to hold a flatcar load of green lumber for drying, a planer and other heavy machinery, including matchers for tongue and groove work and band saws, as well as a cabinet shop and a trim department, the newspaper said.

“Within two hours the mill building was a roofless giant barbecue pit into which were tumbled sheet steel sawdust separators, bricks from the collapsed west wall, pipes, glowing beams and heat-twisted machinery.” The Times reported.

Fortunately the company’s 40 or so employees had already left for the day.

A 200-gallon fuel tank exploded early on, but a 5,000 -gallon tank buried under the mill building did not ignite.  Still there was plenty to keep the fire going.

“They had a lot of dried wood that would be used for furniture making,” Mr. Stewart said.

With the fire feeding on stacks of aerated lumber, it would take Wethersfield firefighters three hours and the assistance of several other fire departments to finally bring the blaze under control.

The town had two fire companies at the time.  For each company, “I think our quota at the time was 25 members,” Mr. Stewart said, so the department had a total of 50 members and some people were bound to have been unavailable.

“First of all, when the fire was so hot, you couldn’t get near it,” he said, recalling that the suit he was wearing was ruined.

“We really couldn’t knock it down.  Hartford came up with an aerial ladder.  The flames were leaping up 100 feet or so,” Mr. Stewart said.  With the city’s ladder truck it became possible to wet everything from the top down and stem the spread of the fire.

“When the fire finally knocked down, you could walk through the yard with your boots.  There was an awful of water; it was knee-high,” he said.

“Lugging that hose and dredging through the water was certainly a lot of work.” Mr. Stewart said.  Firefighters had to drag lines from hydrants as far away as Hartford Avenue.

Sections of wire fencing were cut away so that they could bring lines into the lumberyard, the Times said.

Members of the Poquonock Fire Department brought a 3,300 -gallon water tanker down from Windsor,

“Scores of firemen swarmed over (stacks of lumber) and between storage sheds in an effort to stop the fire before it swept the north end of the yard.  Then efforts were hampered by a light wind which kept the blaze shifting into new (stacks).  It was close to 10 p.m. before fire officials, led by Wethersfield  Fire Chief John F. McCue and Hartford Assistant Chief Thomas F. Lee called the blaze under control,” the Times reported.

The paper reported that out-of-town fire companies left the scene at about daybreak on Saturday, while local firefighters continued to spray water on burning embers.

In the Times, Chief McCue praised firefighters from all towns for successfully preventing a total loss.

“The men did a very good job considering the speed with which the blaze spread and the long distances we had to drag hose by hand,” he said.

William J. Kirby, the state civil defense fire coordinator, said, “I’m amazed that firemen could stop the blaze at all, with the intense heat radiation we had here.”

Given the intensity of the fire and the attention it attracted, keeping onlookers at a safe distance was a continuing concern.

Then, as now, high-voltage power lines ran alongside the railroad tracks on the east side of the property.  A lot of people were standing along the tracks, Mr. Stewart said.

“I know the fire department tried to call the power company but they chose not to shut it off,” he said.

According to the Hartford Times the Hartford Electric Light Co. did shut off power to the lumber yard and eventually shut off electricity in the high-voltage lines, where two lines melted, causing them to snap loose and wooden utility poles caught fire.

The fire trucks on the Silas Deane Highway and those watching from the west side of the highway were far enough away to be safe, Mr. Stewart said.  There was a lot of room for people across the Silas Deane, where the Hughes Brothers garage was one of the only buildings between Jordan lane and Cumberland Avenue.

A police sound truck was used to keep onlookers off the highway and later, to instruct motorists on the nearby Wilbur Cross parkway to keep moving, the Times said.

Three brothers, Louis, David and Max Mitnick, who operated the lumberyard, pledged to rebuild.  They told the Times that it was the largest in New England in terms of the volume of lumber processed annually.

According to the Times, the Wethersfield Lumber Co. had provided lumber and millwork for hundreds of homes in the area for 20 years.  A related firm, the Eastern Lumber Co., was a major supplier of hardwoods to furniture makers.

“I heard on some newscast later, (one of the owners) had the audacity to say with a little bit of water they could have put it out,” Mr. Stewart said.

But firefighters had little choice but to soak the site and let the fire burn itself out.

The lumberyard continued to operate until 1961, when the property was sold to a shopping center developer.  A Motts Supermarket opened one portion of the site in July 1962; another major tenant, a W.T. Grant department store opened in April 1963.  The plaza is now anchored by the Price Rite supermarket.

Reprinted with permission from Wethersfield Life.

About the Author: Doug Maine