Home » Articles From The Community » Wethersfield Enters the Revolution

That spark was provided by the “shot heard round the world” on April 19, 1775.  At ten in the morning, Israel Bissell, postrider, set up from Watertown, Massachusetts with a notice giving the particular of the Lexington engagement and stated that the bearer “is charged to alarm the Country quite to Connecticut.”  Bissell rode hard, so hard that his horse fell dead in Worcester. 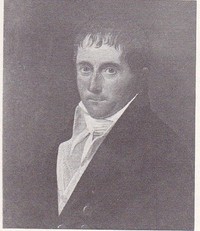 (Ashbel Wright, portrait by Dr. Samuel Broadbent.  Wright was one of the Wethersfield men who participated in the Lexington Alarm.)

The next morning, with a fresh mount, he resumed his journey and by 4 o’clock Thursday afternoon had spread the word to Norwich, and by seven to New London.  Through the second night he rode, reading Branford at noon, New Haven in the evening.  A rider is said to have left from Guilford and delivered the news to Wethersfield and other towns in the interior on Friday, April 21.

It is interesting to note that Silas Deane in his diary recorded on Thursday the 20th: “Mr. Isaac Sheldon of Hartford came at half past ten in the morning with a letter from J. Palmer informing that the regular troops fired early in the morning before on a number of people at Lexington and killed some of them, that they continued their march for Concord…The news was discredited, from the suddenness of its arrival and other causes…” On Friday, the 21st, he records “The intelligence was confirmed by Mr. B. Deane from Hartford at 10 o’clock on which we instantly beat to Arms and alarmed the town and draughted out of the whole 100 men and went to make preparations of provisions and the like.”

On the same day, the local Committee of Correspondence received an order from the State Assembly to draft out and enlist their men, choose commanding officers and provide twenty days provision, ammunition, carriages, packs, horses, and all other necessaries.

On the following day, the Town Selectmen addressed a letter to Capt. John Chester, commander of the local militia company, the 1st company of the Connecticut’s 6th Regiment: 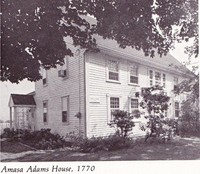 “To Capt. John Chester, and the gentlemen officers and privates under him, who with a spirit if equaled, never exceeded, in the History of the World, are setting out on the most important expedition, that of relieving their Countrymen, and their Country from a Cruelty and tyranny exceeding the power of language to describe.

“Gentlemen permit us however out of rule, the times will apologize, to give you with our best wishes and most fervent prayers, Our advice on some subjects, which the hurry of preparation may have prevented your attending to.  We conclude you will take the directest road to the scene of action, and be moderate in your march, for too great dispatch may render you unfit for service on your arrival.  In the course of your Journey we have the happiness to be assured that you will exhibit such a Character for temperance, decency, and order as will reflect honor on the town and Colony to which you belong and engage the blessing of heave, in the cause in which you and we are engaged.”

On Saturday, April 23, the drafted militia men signed a pledge penned Silas Deane.  The men agreed to ” conduct themselves decently…avoid drunkenness, profanity and every vice of Nature…(and) to obey their officers.”  Those men found unworthy of their service were to be turned out of the company and ‘delivered to suffer the contempt of their countrymen.”

An anonymous letter dated Wethersfield, April 23 describes the scene on that day as follows:

“We are all in motion here and equipt from the Town yesterday, 100 young men, which cheerfully offered their services, 2 days provision and 64 rounds per man.  They are all well armed and in high spirits.  Our neighboring towns are all arming and moving.  Men of the first character shoulder their arms and march off to the field of action.  We shall by night have several thousands from this colony on their march…We fix on our standards and Drums the Colony arms, with motto “Qui Transulit Sustinet” round it letters of gold, which we construe thus “God, who transplanted us hither, will support us.” 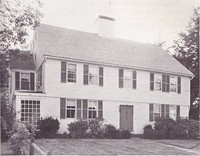 Leaving their fields, their homes and their families, the 101 privates and their 16 officers under Capt. John Chester, could be proud that their company of volunteers was the best equipped and the best trained which marched from Connecticut.  The Wethersfield Company was one of only two Connecticut regiments in uniform enroute to Lexington, the other being Benedict Arnold’s Governor’s Foot Guard from New Haven.  The only description of the Wethersfield uniforms tells us that they were wholly blue turned up with red.

The first military duty of the Wethersfield militia proved to be brief.  The majority of men in the company served for only six days.  Wethersfield was later reimbursed in the amount of Lbs 156 11.s 2. d for the participation of its company in the alarm.

(One of the Buck barns)

This article is excerpted from the monograph “Wethersfield Enters the Revolution”, published by Wethersfield Historical Society.

About the Author: Ronna L. Reynolds