In September 1827, the newly constructed Connecticut State Prison opened its doors to eighty-one inmates once housed at Newgate Prison in Granby. The prison was modeled after a state-of-the-art penitentiary in New York, and the prison’s administration stressed prisoner rehabilitation during incarceration: prisoners labored by day to learn a trade, were allowed plenty of fresh air and exercise, and offered religious services and Sunday school classes.

Both male and female prisoners were housed in separate parts of the prison. Incarcerated women cooked, cleaned, and repaired clothing used in the prison, as well as made cigars. Male prisoners worked as carpenters, coopers, tailors, and blacksmiths, among other things. Until 1880, prison labor supported the cost of running the facility.

Many prisoners served long or life sentences at this maximum security facility. The incarcerated served time for everything from stealing horses, to arson, to murder.

Seventy-three prisoners were executed at the prison between 1894 and 1960, with fifty-five being hanged before the method was stopped in the 1930s. The others were executed by electric chair. On May 17, 1960, the last inmate executed was Joseph Taborsky, convicted of killing six people. 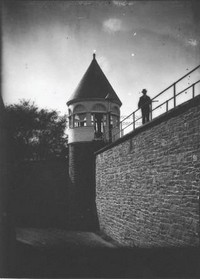 Violence was common at the prison, and during its 136-year history two wardens and three guards were killed by inmates. The prison closed in 1963 when the Connecticut State Prison was moved to Enfield. The complex was demolished a few years later. All that remains on the former grounds is a small marker commemorating the site of the prison’s burial yard.

* The Connecticut State Library has a database of prisoners which you can search by name, town, or date. See if your ancestors were there! Click the link above to find out.

* Package stores in Connecticut were once open until 11 p.m., but in the 1960s legislature set closing times to 8 p.m. after Joseph Taborsky went to the electric chair at the prison. He was convicted of a series of murders and robberies, which included package stores.

* Amy Archer Gilligan (who was purportedly the murderess portrayed in Arsenic and Old Lace) served time at the Connecticut State Prison.

A version of this article was commissioned for the Encyclopedia of Connecticut History Online currently under development by the Connecticut Humanities Council.