My grandmother was in tears.  Her pregnant daughter and husband along with their two year old son were moving from Hartford to the country.  Grandma, who had fled the isolation and poverty of the farms of eastern Europe for a better life in America, could not understand why her daughter wanted to reverse this process.

The year was 1935 and my parents were moving to Wethersfield!

In truth grandma had some reason to be concerned. Wethersfield at that time was still a very rural community that was slowly awakening from the farming town it had been for 300 years. The trolley had come to Wethersfield in 1894 with lines into Old Wethersfield and also along Wolcott Hill Road into Griswoldville.  These trolley routes along with the automobile would soon turn the town into a bedroom community for Hartford 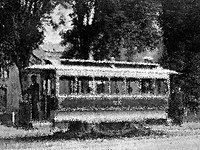 But in the year my parents moved that process was still in its infancy.  Most of the new homes were isolated in old Wethersfield and on a few streets that branched from Wolcott Hill Road.

Coleman Road today is a street lined with homes from the Silas Deane Highway to Wolcott Hill. I remember it as a gently sloping hill of fields broken by a lone house here and there. From our yard we could look out over the Silas Deane Highway with an unobstructed view of the Glastonbury hills.  To the south all the way to Prospect Street there were cornfields and pasture land.

Longvue Drive was simply a dirt road that stopped at the top of the western end of Beverly Road. The eastern portion did not exist yet nor did any of the streets at the southern end of Longvue. On at least one occasion I can remember we awoke to a stray cow in our yard that had managed to roam through the fencing surrounding the pasture land.

I’m sure my mother must have been lonely but for me growing up in the “country” was pure joy. The first couple of years I had only my younger brother for company. But slowly other families elected to build in our area.

They all seemed to have one or two children about my age and we had the run of the area for a mile around. With no automobile traffic to speak of, few lawns to trample and living at a time when the word pedophile was unknown we were allowed free range over a wide area.

The cornfields were a favorite place because they were like a maze. We could run down the rows and cut in and out hiding from one another and pretending we were hunting big game. Another favorite pastime was playing in and around the new houses being built in the area. Huge piles of dirt were mountains to climb and of course to slide down and piles of lumber were left here so we could arrange them into boats or cannons.  And of course the ultimate thrill was to climb down into those damp cellars and forage around. And yes, we did get nails in our feet and we did come home filthy every night but we were happy and out of our busy mothers way and pretty much left to amuse ourselves.

Without T.V., movies, or organized sports, we had to amuse ourselves. Also of course there were no town swimming pools and the thought of a private home having one didn’t even occur to anyone. But the summers could be hot and not only did we lack the luxury of a pool but air conditioning was still a thing of the future for the average person.

Even the large companies in Hartford did not have air conditioning and one of the big events of the summer was to learn that it was so hot that they let the people in the insurance companies out early. I can still remember my mother exclaiming and she picked up the newspaper, ” I told you it was the hottest day of the year yesterday.  Look, they even had to close the Travelers and send people home” as if this proved that she had a better sense of what the weather really was like than the rest of us.   However, as youth would have it we found a way to beat the summer heat in our own resourceful way.

But this adventure would take a little planning.  Although our mothers might have been complacent about us having a wide run of the land they were all nervous about playing around water, especially my mother who could not swim and looked on every small stream and pond as a lethal threat.

To accomplish our mission we would have to resort to the old dodge of making alibis for each other. I was spending the afternoon at Terry’s house with Ed and Zeb. Of course they in turn would tell their mothers that they were at my house.

As strange as it might sound today at that time the telephone was not the ubiquitous appliance it is now.  When we first moved to Wethersfield we did not have a phone for the first few years. When we did get one we got a two party line as did most of my friends parents because it was cheaper than a private line. This meant we shared the line with another, unknown family and might find someone on the line when we picked it up. Telephones were not to be used furiously but saved for important or emergency calls lessening the chance that our mothers would call one or the other and discover our duplicity

Although we were going swimming we didn’t need swim suits, towels or sun block, which made our getaway simplicity itself. We simply started walking, first down the dirt road that was Longvue Drive south to the end where we then crossed open pastureland until we came to huge fields of corn which always gave us the fun of running and dodging through the sweet-smelling stalks.

Finally we came to Prospect Street, which was no problem to cross because there was practically no traffic. The main problem was running across the hot asphalt with our bare feet. Across Prospect Street.  was a large fenced-in cow pasture. We had little trouble crossing the barbed wire fence and headed for the small grove of trees a few hundred yards off navigating between thistles and cow droppings along the way.

Ahead of us lay “Shep’s” pond. We never knew or cared who “Shep” was but that was the only name we ever used for our swimming hole. The side we approached was very shallow and always covered with green algae and accompanied by one or two cows drinking. The pond opened up into a deeper dark brown pool edged by a few small shrubs and trees and one or two larger ones. A long, well used rope hung from the largest tree.  As soon as we
could shed our clothes we headed for the rope as the preferred way to get into the water was to swing out and just let go. In minutes the small pond was alive with shouting, splashing boys as we let go of the rope screaming and splashing each other and fought to be the first one out so we could be the next to sail out on the rope again.

None of us could really swim but we just churned up so much water that we always made  it back to the bank a short distance away – our efforts helped by stories of bloodsuckers and quicksand that the older boys always told to tease us. For some reason, once up the bank we couldn’t resist flinging brown mud at each other, which resulted in more screaming and running and pushing into the water. Finally, too tired to roughhouse any longer, we would lay around until we dried off. For a few moments the sight must have been one right out of a Winslow Homer painting.

The whole point of going swimming was the adventure, the excuse that it was hot and we needed a swim was just that, an excuse for a grand adventure for we expended a lot more energy getting there and walking the mile back home than the hour of swimming was worth in cooling effect.

Time went on.  The trips to the swimming hole, never more than once or twice a year dwindled off. One of the mothers got her drivers license and drove us on occasion to a lake where there was a “real” swimming   beach. Then in 1945 we heard that they were going to have swimming races at a new swimming pool in Wethersfield. We rode our bikes down a now paved Longvue Drive through the new Wethersfield Heights development which had been built during the war to house people brought to the Hartford area to work in the defense industry.

We finally came to a narrow paved road where there  had once been the pasture we wandered through.  At the end was a bath house and over the door the wording “Mill Woods Park”. It was great. There was a sandy beach, no cows using the water as a bathroom and the water was almost clear.

There were swimming lessons and lifeguards.

That opening day they had swim races and I was proud to win some type of ribbon for my age group. I remember staring in amazement at an under water race. One of the older boys I knew dove in from the small dam at one side of the pool and never seemed to come up. I stared in awe as a small trail of bubbles marked his path under the water. I didn’t think anyone could stay under the water that long and began to feel scared that something had happened to him. Just then his head shot up out of the water. We all cheered and he waved. He won a ribbon too.

Ellis Backman, a teacher at the high school was the swim director and stated after the first year of operation that he was very pleased that 1,545 people used Mill Woods the first year, a rate of 171 per day and he was sure the number would grow in the following years.

As we all grew older we often went there after work to cool off helping to swell the crowds to 3,521 the following year. Mill Woods was certainly a good thing for the town. But, I’ve always had two questions about the place.

First why wasn’t it named “Shep’s Park” and what ever happened to the original Shep’s pond?

I know it was there. I swam there, didn’t I? 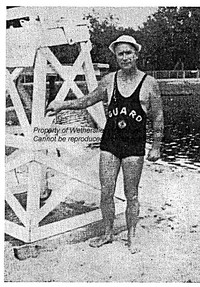 About the Author: Tom Gworek