Home » Articles From The Community » Wethersfield: The "Cradle of American Seed Companies"

“To own a bit of the ground, to scratch it with a hoe, to plant seeds, and watch the renewal of life – this is the commonest delight of the race, the most satisfactory thing a man can do.”
Charles Dudley Warner (1829-1900), Hartford author and Hartford Courant Associate Editor.

When Wethersfield founder John Oldham died in 1636, the court at Wethersfield directed Thurston Raynor to preserve Mr. Oldham’s “corne”, known today as wheat or rye.  This valuable commodity might later be needed to pay Oldham’s debts.

The “corne” had sprung from seeds planted in Wethersfield.  From obscure beginnings such as this have come close to four centuries of Wethersfield’s remarkable association with the seed industry.

Two company names are familiar today: Comstock, Ferre & Co. and Charles C. Hart Seed Co.  Where did these and other such companies come from?  Records of the earliest days are incomplete, but what has survived is fascinating, and begs for further research.

Let’s set the stage.  First, imagine a country where there were few commercial sources of seeds, and no one capable of serving all of New England’s farmers.  Now picture acres of vegetables, flowers, and herbs growing fresh seeds for wholesale sale throughout the country.  Think about the energy and nerve of smart seedsmen striving to supply good seeds conveniently and quickly to farmers and gardeners.

Picture sweating horses pulling full wagons of harvested seeds to warehouses for milling, cleaning, bagging, and storage.  Imagine wagons, trains, or boats on the nearby Connecticut River hauling the precious goods to market.  Then, think about these millions of Wethersfield seeds, growing as they were meant to, nourishing and beautifying America.  Picture sweet corn, juicy tomatoes, carrots, pungent onions, beets, peppers, squashes, and scores of other varieties of produce.

1811: Joseph Belden’s advertisement for “New Garden Seeds of the Growth of 1810” appeared in the Hartford Courant.  This is the earliest evidence we have of a
seed company operating in Wethersfield.

c. 1820-1845: Wethersfield Seed Gardens was operated by James L. Belden, who lived at 249 Main St.  He sold at least 60 varieties of vegetables and herbs.  His gardens, seed houses, and seven or eight barns must have been beautiful, stretching along Church Street, all the way to Garden Street.

A fire in 1834 destroyed Belden’s outbuildings, along with several other homes.  It was a disaster which prompted Wethersfield to purchase its own $400 fire engine.

Franklin G. Comstock and his son William G. Comstock bought Belden’s Seed Gardens in 1838 – a barn, and a small inventory of seeds.  Butler Strong came on as a partner, and they purchased $1,200 worth of seeds from London. 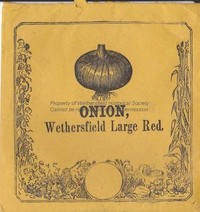 1845:  Comstock, Ferre & Co. was the new name of this thriving business, developed by the Comstocks, Henry Ferre, and Daniel Strong.  Their seeds gardens filled acres throughout Old Wethersfield, the Great Meadows, and Griswoldville.  Their earliest surviving catalog dates from 1846.

Comstock’s traveling seed merchants distributed commission boxes of Wethersfield seeds in territories that stretched from the southern states, to the Mississippi River, and westward with the railroads.  At each stop, they picked up last year’s boxes and collected payments.  Old commission boxes went back to Wethersfield, and Comstock’s sent out additional boxes when needed.  By 1853,when Comstock, Ferre & Co. incorporated, it sold seeds, roots, fertilizers, and tools.

Stephen F. Willard began work at Comstock’s in 1872 at age 21.  He traveled, selling seeds, and rose in the company to be President (1898 – 1924).  In 1883, he helped organize the American Seed Trade Association.  As a representative to the Connecticut Constitutional Convention in 1902, he received a scion of the Charter Oak tree.  Today the tree he planted can be admired on the front lawn of the Keeney Cultural Center.

1845: Thomas Griswold & Co. was one of the most successful Wethersfield seed companies.  Its catalog and seed lists have been preserved in libraries around the country.  In 1931 Comstock, Ferre & Co. purchased this company.

1852: Butler N. Strong & Co. was formed by a Comstock partner who struck out on his own.  The records are scarce, but a list of garden seeds for sale in 1852 exists.  The business was sold to Silas and Richard Robbins and incorporated as:

1855: Johnson, Robbins & Co.:  This was a wholesale and commission box seed company.  Along with two Philadelphia companies, it practically controlled the seed trade in the south.  Charles C. Hart started out by working here for 14 years.  Deacon Richard Robbins was an organizer of the American Seed Trade Association, and its first president.

1866: Meggat & Wolcott:  William Meggat started out at Comstock’s then began his own business with Samuel Wolcott.  It lasted about 30 years with 22 acres for growing seeds located in the vicinity of Sacred Heart Church on Hartford Ave.  Meggat planted those spectacular copper beech trees west of the church.  Meggat’s influence went far, as he often traveled to California to assist in the seed business there. 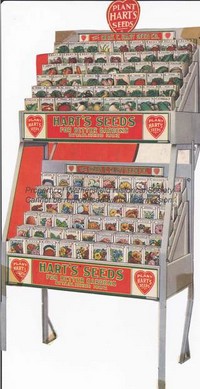 1897: The Charles C. Hart Seed Company was the new name of Hart Welles & Co.  The front section of their Main Street headquarters was built in 1965.  The Hart Seed display rack, so common in stores today, is the descendent of earlier Wethersfield seed commission boxes.

The complete story of America’s garden seed industry has yet to be written.  True to heritage, a Wethersfield resident
will be doing just that.  Corinne Willard is former president of Comstock, Ferre & Co., and a nationally known expert on the garden seed industry. After years of research, travel, and interviews, she is now writing “From Seed to Seed.”
This work will contain stories about Wethersfield, which Mrs. Willard calls the “cradle of American seed companies.”

The author acknowledges with gratitude Mrs. Corinne Willard, whose paper on file at the Wethersfield Historical Society, “Wethersfield Goes To Seed” (1984), describes the history of the local seed industry.

The above article was written in 1996.

Today (2012) the Chas. C. Hart Seed Company is owned and operated by members of the fourth, and fifth generations of the Hart family in the brick office-warehouse complex at the same location on Main Street in historic Old Wethersfield Connecticut. (www.hartseed.com)

The following more recent history of Comstock Ferre was provided by the Jere and Emilee Gettle, owners of Baker Creek
Heirloom Seed Co., and current owners of the business – http://rareseeds.com/comstock-ferre and http://comstockferre.com/