“There are no dividends to compare with comfort and contentment, no returns equal to the personal pride felt by the man who owns the home that shelters his family.”

But the living quarters constructed in 1633 by John Oldham and the other “Ten Adventurers” who came through the wilderness from Massachusetts Colony to found our “most auncient towne” – offered shelter, but not much more than that.

“the first homes here were dugouts or, as they appear to have been called, cellars.  These cellars were made by digging a pit in the ground, preferably in the side of a bank, and then lining the sides of the excavation with stones and upright logs.  With a roof of loges, bark or thatch, and the earth banked high on the outside, a house that was at least big enough to stand erect in, and even move around a bit, was possible.” (Some old Wethersfield houses and gardens.” Adams, Henry Sherman, Printed Privately for the Wethersfield Women’s Saturday Afternoon Club, 1909).

Scores of Families In Homes, Which Are Well Nigh Ideal – Early 1900s

The March 18, 1929 Hartford Courant published the Wethersfield Grand List – a listing of all real estate parcels and business personal property within the town.  The headline read: “Hubbard Holdings Lead Wethersfield Grand List, Value Place at $120,774”.  The subhead was “James R. Goodrich Next With $92, 841 and Wethersfield Lumber Company Is Third”.  Within the alphabetical inventory Harrison A. Bosworth and H. M. Bosworth are shown as owning a total of about $32,000.

In the first half of the twentieth century many men were involved in the transition of Wethersfield from “a mere village of scattered houses with its surrounding farms into a fair-sized residential suburb.”   The best known of these and most successful were Albert G. Hubbard and Harrison A. Bosworth who between the two of them built over 100 houses in the historic district and many more throughout the remainder of town – building “on spec” and developing substantial portions of many of today’s neighborhoods. 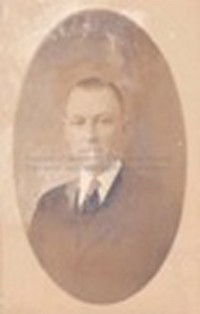 Albert G. Hubbard was born in Southington, Connecticut in 1886 and moved to Wethersfield at the age of twenty-one.  Working as a carpenter he built at least two houses in Hartford but left that job in 1910 and bought four lots on Wolcott Hill Road with the intention of developing them.  His first Wethersfield house was sold to James Goodrich for $2,600.  In the years after 1910 Hubbard designed and built over 200 homes in town offering sixty-seven different plans to choose from.

A Hubbard sales brochure asserted that:

“Wethersfield has much to commend it to the man who would be near his office, yet away from the city’s turmoil….

“….[Wethersfield Country Club] has an unusually sporty 18 hole golf course.  Wethersfield Cove provides an exceptional Yacht harbor and the beautiful Connecticut River winds its way down to long Island Sound.  Horseback riding has many devotees here with bridal paths to suit all…

Priced between $4,500 and $20,000 “Hubbard Houses” were built to meet the needs of the modern suburban family.

“Conveniences that a few years ago would have been considered luxuries even in the most expensive residences, are included as a matter of course in these moderately priced homes, including: attractive vestibules, center halls, staircase and large living rooms with fireplaces, cheerful dining rooms with corner cupboards, sub parlors with cozy fireplaces, modern kitchens with convenient built-in cabinets and sunny breakfast nooks, first floor lavatories, two to four large, light, airy bedrooms on the second floor, a beautiful tile bath, large open attic or sometimes a finished one.  The roofs are covered with a heavy asphalt shingle, the warm rich beauty of autumn blends of russet, old gold, burnt orange, browns, blues, greens, and yellow, which harmonizes with the body colors and trim.  An attractive velvety lawn with shrubs and walks, a good rear yard, with a flower or vegetable garden for that outdoor exercise, a one- or two-car garage which completes the setting and makes it a complete modern home.”

“Being of neighborly spirit, Mrs. [Isabel] Hubbard and I endeavored to know our homeowners intimately.  But as such a group goes beyond a certain limit, individual calling is out of the question.”

In March 1925 A.G. and Isabel Hubbard held a dinner at the Masonic Hall for those who had purchased his homes.  186 people attended and one month later a similar event inaugurated the “Hubbard Community Club” providing “entertainments, dances, suppers, picnics, masquerade parties and other jollifications.”  The town’s annual report for that year asked, “Can you imagine a community anywhere else like this?”  The club was active for many years and, in addition to the celebrations, held an annual “Olla Podrida” variety show to raise money for charitable activities. 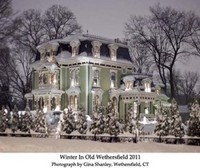 For his own home A. G. Hubbard chose the historic Silas W. Robbins house at 185 Broad Street.  He divided the estate’s extensive grounds of elms, maple trees, evergreens and flowers and created Robbinswood Drive.  Albert and Isabel had three children – Lucille, Lawrence and Mabelle who was killed by an automobile at the age of eight.  The house was heavily damaged by fire in 1996.  It has been restored and is now a bed and breakfast.

As Nora Howard, former Director of Wethersfield Historical Society has written, “Hubbard, like the many Wethersfield builders who preceded him, knew that he was leaving a legacy of well-built and appealing homes.  At the same time, he was consciously creating for ‘his ‘ homeowners something that is timeless.  Writing in about 1930, he said, ‘There are no dividends to compare with comfort and contentment, no returns equal to the personal pride felt by the man who owns the home that shelters his family.'”

In 1925 Harrison A. Bosworth purchased land on Hartford Avenue in Wethersfield.  The property contained two houses, which he then moved to Wilcox Street and Harmund Place.  From there he further developed the two streets as well as Avalon place.

Dick May, a personal friend and former resident of Woodstock Connecticut, remembered his “Uncle Harry”.

“Harrison Alpheus Bosworth was born 9-25-1892, the ninth child of Henry Allen Bosworth and Margaret Buell Bosworth.  They lived in Eastford.  I don’t know when Harry moved to Wethersfield, but I think he lived in a house quite close to the Prison.  He wasn’t in the Army, but three younger brothers served during WW1.  I do not know when he married, but his wife’s first name was Mae (or May) and they had one child, Donald.

“…. While I’m sure that uncle Harry was a hammer and saw builder, I don’t believe Don put on the overalls.  I think he drafted plans for the carpenters.  Maybe he designed some of the homes.

“I have a nice picture of uncle Harry, standing with his brothers and sisters, back in the mid-1930s.  He is standing in the far left in the picture.  It would have been taken at the time he was involved in developing your town.”

Like Hubbard, Harrison Bosworth built houses of various styles – some within and some outside of the Historic District.

“Construction of a frame and brick house has been started at 135 Clearfield Street [now Road] by H. A. Bosworth.  It will contain seven rooms, one lavatory, a tiled bath and a fireplace.  The house will have brass plumbing and a hot water heating system.”  (Hartford Courant 1/10/1932)

“H.A. Bosworth…started the construction of a frame house in the English design to contain six rooms and open porch at 3 Avalon Place…

“Mr. Bosworth sold the house built by him at 6 Avalon Place to P.C. Bradbury, a teacher of mandolin and banjo.  The house was built to order in the English Style and contains six rooms and an open porch….

“The house that Mr. Bosworth is building for Louise P. Johnston, wife of James Johnston of the Connecticut Company at 631 Franklin Avenue…is of the Dutch Colonial Style containing seven rooms and sun porch.” (Hartford Courant 1/25/1931)

Unlike Messrs. Hubbard and Bosworth James R. Goodrich (the second largest property holder in the March 1929 Hartford Courant listing) was not a “hammer and saw builder” but rather a planner of housing developments, the land for which he bought and then sold to builders and/or future homeowners.

One of these sites was “Goodrich Manor” which extended north to south from the Hartford town line to the south side of what was then called Mabel St. (now Saxon Road) and east to west from Wolcott Hill Road to Goodrich Drive.  It contained 106 lots located on Goodrich Drive, Mabel Street, Judd Street (now Road), Reed Drive and Stillman Road.

A home in the English style at the corner of Saxon Road and Goodrich Drive was built for James S. Goodrich, treasurer of the Hartford Battery Company of Milldale by A.G. Judson of Wethersfield and architected by Carl V. Johnson of Torrington.  Another Goodrich Manor house at the corner of Judd and Goodrich Streets was built by Adolf Groskritz for Mary Groskritz.  And an old cottage on Jordan Lane owned by Mrs. James R. Goodrich was completely remodeled by Harry A. Bosworth and then rented.

Go to Wethersfield’s Homebuilders: 1940 and Beyond