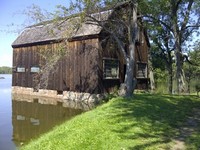 The early theater of military action [in the American Revolution] centered in New England, prompting immediate and drastic changes in the activities of Wethersfield’s seafaring men.  Before the war, many local men had engaged in the lucrative West Indian and Southern coastal trade.  However, shortly after Lexington, the British established a blockade, which effectively destroyed this trade.  Local men soon expressed an interest in having their commercial vessels armed and refitted as privateers.  On November 27, 1775, Barnabas Deane echoes their eagerness in a letter to his brother Silas, then in Congress.

“In case American privateers are to be allowed to take British property in the West Indies, you are sensible that the first opportunity may be very advantageous, and as well disposed of in this colony as anywhere; especially as those now applying are your good friends and would prosecute this affair immediately.  If you think there is a probability from Congress, pray attempt it, as those persons desirous of adventuring are very impatient to be informed.”

In that same month, Congress passed legislation authorizing itself and the separate states to commission privateers.  The provision was made in Connecticut that all prizes taken by State-commissioned vessels would be divided; half to the State treasury, half to the owner and crew.  In the course of the war, Connecticut dispatched close to three hundred privateers.

Despite the inherent dangers, Wethersfield owners eagerly refitted their vessels as privateers.  Records indicate that local men met with varying degrees of success in this treacherous business.

Those local privateers, which were legally registered included:

Nancy, sloop. Commission: April 17, 1779. Owners: John Wright and Company.  Commander: Moses Tryon.  Tryon and his vessel were captured by the enemy and carried into New York in May of 1779.  Tryon was exchanged on June 26, 1779 for one George Kidd.

Samuel, brigantine. Commission: August 17, 1779. Owners: John Wright and Co.  Commander: John Bulkley Jr.  According to the “Connecticut Gazette” of New London, Capt. Bulkley and his brig were taken by the British and taken to the West Indies.

Wethersfield privateers were most active and successful between 1777 and 1780.  It was during this period that the war shifted southward and British blockade was relaxed along the Connecticut coast.  After 1780, privateering was no longer encouraged by the State because it drastically reduced the number of available men needed to meet State military quotas.  Although it is evident that a few local men profited from privateering, the practice provided a poor economic alternative to peacetime trade.

In addition Wethersfield played a small but significant part in the institution and operations of the Connecticut State Navy.  Prior to the outbreak of war, Connecticut had at its disposal only one vessel.  It was the brigantine, “Old Defense,” the age and construction of which prohibited its use as a formidable war vessel.  Early in the war, Connecticut citizens became concerned over the need for maritime protection.  In a report of a meeting of the “Governor and company,” dated July 24, 1775, it is clear that local people formally advocated the formation of a State Navy.

“Letters received from a number of gentlemen from New Haven, Middletown, Wethersfield, &c, relating to it, read, &c. Cap. Deshon, Mr. Shaw & Capt Giles Hall were present on their a/c and discoursed with, &c., and they retired; and on further consideration &c. this Council are of the opinion and do resolve that William Williams & Nathl Wales Esq. together with Capt Deshon & Capt Hall be a committee to visit Norwich, New London, and by the sea coast to N. Haven and to Middletown, Hartford &c. to enquire after and find out proper and suitable vessels for the purpose, the terms on which they my be had, the proper manning of them, the terms on which officers and men may be had &c. and give proper directions for preparing carriages for the cannon at N. Haven which may be wanted and what may be proper and necessary, and thereof make report to this Council on Wednesday the 2d of August next, to which time this Council is to be adjourned.” 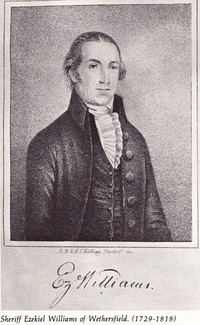 On August 2, the same committee did reconvene and decided that:

“…a certain brig called the Minerva belong to Capt Griswold and now lying in Connecticut Rive at Rocky Hill is one proper vessel  to be employed for the service aforesaid, and do agree and resolve to take up and employ sd Brig in the service of this Colony as aforesaid during such term as sd Assembly or this committee shall find needful to employ her in sd service; and do therefore appoint Titus Hosmer & Ezekiel Williams Esq. (of Wethersfield) and Capt Giles Hall a committee to take up and retain said brig in the service aforesaid…charter of sd brig and execute proper writings.  And the sd committee are further directed and impowered to furnish, prepare and provide all necessary additional sails, rigging and furniture and also all proper  & necessary ship stores and provisions, and furnish from the Colony stores as far as may be, the necessary cannon, swivels, small arms, pistols, shot, powder, &c. &c., taking further needful directions from time to time from his honor the Governor & sd committee.”

In the course of the war, the Connecticut Navy eventually included thirteen vessels.  Most Wethersfield sea-faring men chose the adventure and independence of privateering but a few did join the State or Continental Navy.  One native, Benjamin Catlin, formerly with John Chester in Massachusetts, and later taken prisoner at Quebec, apparently found the naval service quite to his liking.  In July, 1777, he wrote home while on board the frigate Trumbull, “we live in clover, assure you, the most agreeable life I ever lived.”  Another local man, Capt. Allyn Stillman distinguished himself in the service of the state as a blockade runner.  Stillman commanded a State vessel chartered in 1777 expressly for the purpose of importing the precious commodity salt.

So serious was the need for salt that by May of 1776 the General Assembly voted a bounty of 100 pounds to the first person who erected a new saltworks.  In November the Assembly passed an act authorizing the seizure of salt held by any “engrosser” Repeatedly avoiding capture, Stillman successfully delivered salt to Connecticut until the end of the Revolution.

This article is excerpted from the monograph “Wethersfield in the Revolutionary War: 1776 – 1783”, published by Wethersfield historical Society. 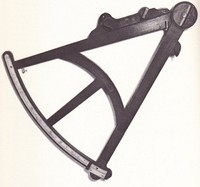 About the Author: Ronna L. Reynolds