[This is a confused mixture of great and little Concerns I select a few things  chiefly  such as  respect  moral Ideas.   He is greatly incensed with the  public for Depreciation.]

There is  a parcel of Continental Trash  that cost me  from first to last Twelve hundred Pounds.  I desire it may be kept safe  for  seven  years  from  the day that I die: and if it  produces nothing in all that time that it be made a present of  to the first young Devil that may be born that day; perhaps he’ll know how to turn it to Advantage, or at least make a fine Coat for himself of it -I don’t mean that you should make the present, but please to send the blackest white Man in the State to do it.

[He orders a Demand to be made on the Assembly respecting the Rent of his house etc. And speaking of the Depreciation of L 150 Bills before the war he says:]

I pray Heaven that the temporal Interest of each Man that voted for the Depreciation of that Money or those Notes given for it, may sink in the exact proportion that those have done thro’ their Means, and I sincerely wish that he might have ten years added to his nat. Life to punish him for his Folly.

I and my family shall go off this stage Martyrs to that Cause that I fondly believed to be the Cause of Justice, Virtue and freedom.  I therefore charge that Assembly […] to pay into the hands of Col. Chester – my L 150 for the Use of my wife or her Nearest Relations.  And I charge Mr. Mitchell and Col. Chester (as my Executor) [to apply to the Assembly] and note down the names of those Members that do not assent to my just Demands and let them and a few more judicious persons observe the End of those men, for if there shd. be any hard eno’ to object, this is my earnest prayer in these last hours, that the Wrath of the Great God may light on them afflict and pursue them, till they die, but no further.  If it is not paid in solid Coin on that day, I desire he will leave the notes in my favor with the Treasurer and never apply more […]

As a small Compensation for the Trouble I give you I leave you the 2 vol. of Montaignes Letters, an Author perhaps you never met with but one of establish Reputation altho’ the greatest Egoist on Earth.  In my opinion the whole Town of Wethersfield is not worth half the Wisdom contained in that Book.  Nor need a man kill himself that reads him, for he is a merry old Wag and speaks as much of living as dying […] To Thaddeus Burr Esq. of Fairfield the 2 Vol. of Sir William Temples Miscellany an author I dearly love.  The town of Fairfield is not as Dust in the Balance compared to his Wisdom.  But Men in general read the best of Writers, as Clowns eat a delicate Dish, swallow it quick indeed but never taste it nor think of it more.

My wife is returned ten days sooner than I or she expected.  Unless the Fates change faster than the wind she is to go with us.

November 18.  Yesterday morning she told me her Dream that she thought I had wrote many papers and was earnestly concerned about her, that these papers were spotted with Blood.  That she also saw a man wound humself past recovery and blood guggle (as she expressed it) from different parts of his body.  Poor Woman she little tho’t that the greater part of her Dream was to be realized within three days.  But I am unappalled and think the hand of Heaven is really with us […] I have prepared a noble supper of Oysters that my flock and I may eat and drink together, thank God and die.

May God protect your family and all the rest of my friends. 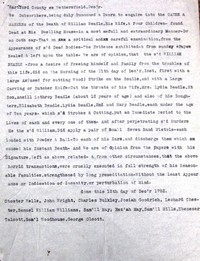