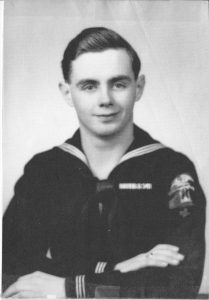 The obituary of William W. Anderson gave the outlines of a life story, but as with most obituaries, the details are lacking. This document records both what he wrote about part of his service in World War II and what his son remembers from stories told.

From the Bangor Daily News
ORONO AND CASTINE – William ‘Bill’ Wood Anderson died on November 13, 2017, after 92 years of life well lived. He was still 18 years old when he landed on Utah Beach, Normandy, France, on June 6, 1944, as part of “Foxy 29,” an elite cadre of Navy doctors, nurses, and corpsmen put together for the invasion of Europe. The LST 500 he sailed on made over 20 trips from England to France and return between D-Day and October. By war’s end he was serving in a Navy hospital on Espirtu Santo in the Pacific Theatre.

Bill was born in Hartford, Connecticut, on July 18, 1925, and grew up in Wethersfield with his parents – Anna Wood Anderson and William Oliver Anderson – and his beloved older sister – Lois Anderson 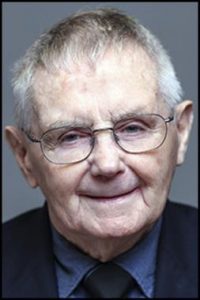 Wieder. He graduated from Wethersfield High School in 1943 and in his home town he earned the Eagle Scout honor.

After the war Bill attended Bowdoin College under the G.I. Bill (thank you America) and was graduated in the Class of 1950, called by the graduates “Bowdoin’s Biggest and Best.” After graduation he took a job with the State of Maine as a social worker in Aroostook County. This was a life- changing event, but not because it launched a career in social work, rather because this is where he met the love of his life, Edith. After a whirlwind romance measured in weeks they married at a social work convention in Portland, Maine. While some said “it will never last,” their life together continued for nearly 55 years until Edith’s death in 2009.

Bill and Edith built a family together in Caribou, Brewer, and Castine. He taught in elementary and junior high schools at Loring Air Force Base, Old Town, and Brewer, where he retired in 1980.

Bill is survived by five children, Laurie Liscomb of Hilton Head Island, South Carolina; Warrie Trichka of Vernon Connecticut; Rae Cousins of Southwest Harbor, Maine; Warren Baldwin of Merritt Island, Florida; and Mark Anderson of Holden, Maine. He is also survived by nine grandchildren and thirteen great-grandchildren, all of whom benefited from his love and example of life well lived.

For much of his life, Dad never talked about WWII. That started to change in the late 1990s. My first notes about his stories were written January 4, 1999.
I want to record what I remember about his Normandy experiences and then fill in details later. Dad graduated from Wethersfield High School in June 1943 and enlisted in the Navy. He became a corpsman (Navy medic) and was assigned to LST 500. (A model of LST 500 along with his service medals and dress blue uniform were donated to the Wethersfield Historical Society.) He took the LST across the North Atlantic in the winter and was stationed near Plymouth, England where training for the “invasion” was carried out. 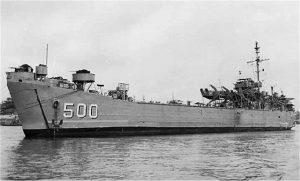 When LST 500 and the other ships left England on June 5 (?), they thought they were on another training mission. Half way across the English Channel they were told by the LST captain that this was the real thing. Sunrise brought them the sight of France and “ships as far as you could see in every direction.”

The LST had a full operating room in it and the mission was to drop off men and material and return to England with wounded. He made the round trip I think 18 times after the invasion…Dad describes the hardest part as the initial wave of the invasion. The landing craft in front of them would sometimes be there and then “gone” the next instant, victim of artillery shell. The water would be full of wounded who the corpsmen on the LST tried to “fish from the water;” but there was no stopping. The waves of ships needed to keep coming — a hard lesson for those trained to care for the wounded.

Yesterday was the 56th anniversary of D- Day, the allied invasion of Normandy. I called Dad to let him know that I was remembering his contributions on that day.

Dad was a corpsman on an LST – LST500. They had traveled to Europe across the North Atlantic, 29 days from Halifax to Glasgow. The ship was stationed in Southampton for training for the invasion.

LST 500 was a hospital ship – set up with doctors, corpsmen, and an operating room. On June 5 they went to sea for another “training exercise, only to learn that this was the real invasion. The ship circled at sea for nearly 24 hours waiting for what we now know as a break in the weather.

Dad says the day of the invasion is a “blur” in his memory. Morning of the 6th approaching France, “ships as far as I could see in every direction.” LST 500 was headed for Utah Beach. Watching ships in front in the invasion, “one minute they were there, the next minute they were gone.” The hard part was not being able to stop to rescue men in the water. There was no stopping until the beach. By mid-morning he was on Utah Beach administering to “casualties of the U.S. Army,” doing the work of a corpsman. How many men lived from his work that day?

Between June 6 and October 15 he made 19 trips between Utah Beach and Southampton, and one trip to the region around Brest to deliver ammunition. Most trips were to remove wounded troops back to England, some were to transport German prisoners of war.

Dad cannot talk of this without crying. Yet he remembers the c-rations that day – a box the size of a Cracker Jax box – lemonade powder, crackers, a can of “spam,” and chocolate.

In October he returned to the U.S. on the Queen Mary, outfitted as a troop ship, across country to San Francisco, then on to the New Hebrides, thankfully spared from direct combat again.

On a lighter note, yet ironic perhaps, Dad remembers New Year’s Day when he was six or so and the local YMCA had a talent show. He won his group with a piano recital. The prize, a model the ship Normandie.

I worked with Dad today on the model of an LST that he is building. We were putting the “conning tower” in place on the model and I asked what that was for. He indicated that it was an observation deck of “the skipper” and that, “…that was where I was on the morning of the landing – on the phones.”

As a corpsman he was a “non-combatant.” While this LST was fitted out as a hospital ship, the LST was carrying infantry and tanks. The infantry troops were off-loaded “on the way in” onto smaller boats while the tanks were driven out the front after the LST had landed ashore.

There were two Navy doctors (a pediatrician and an internist) and two Army doctors, one of whom Dad said “worked wonders.” On the way in an LST  a quarter mile in front on the right took a direct hit and LST 500 “fished survivors out of the water” and the operating room work began. One engine room operator from that ship “had no right to live with the injuries he had sustained, but this doctor put him back together,” Dad said. “We know he survived because we visited him in hospital back in Portsmouth.”

After landing there was some time while first the hatch opened and the tanks were loaded off. While the unloading was going on, the corpsmen set up the brackets for holding stretchers for carrying casualties back to England.

After a while corpsmen went onto the beach with a Chief who was in charge. Dad said, “I used all my morphine and all my bandages.” He thought they were on the beach until about 2:00 when, since half tide was near, it was time to return to England, the first of many trips.

Today, Lorraine and I went with Mum and Dad to the Maine State Armory in August where Dad received a “diplome” from the government of France.

All U.S. veterans in Maine who had served in France between D-Day and V.E. Day were recognized. While there was much V.F.W. type activity, the high point of the day was when the French Counsel General from the Boston Consulate made the awards.

It was surprising to see Dad do this since he had never participated in these types of events much. He had visited the beaches of Normandy just before the 50th anniversary of the invasion. On Friday he wore a dark suit, Bowdoin tie, and the medal given by the regional government for all visiting D- Day veterans.