Below are biographical sketches of ordinary people who lived extraordinary lives that reflect the town’s history and character. Included in these selected biographies are a Revolutionary soldier, free African American, prison guard, sea captain and entrepreneurial bonnet maker. Just click on the names below and discover something new about former Wethersfield residents. 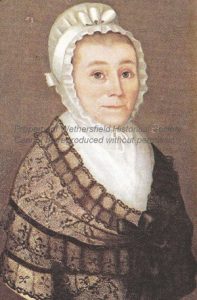 John Chester was born in Wethersfield, Connecticut on January 18, 1749. After graduating from Yale College in 1766, located at that time in Wethersfield, he became an officer in Connecticut Colony’s Militia in 1771. In May of the following year, Chester began his career in Connecticut’s General Assembly and continued to rise in rank until he retired as Speaker of the House in 1787. During his stay with the General Assembly, Chester became the commander of the First Company of the Connecticut Sixth Regiment. As the Battle of Lexington and Concord occurred in April of 1775, Chester and many other men from Wethersfield went to aid the Massachusetts minutemen as part of the Lexington Alarm. The battle at Lexington and Concord was over before Chester and his men arrived. Instead of returning home, the company stationed themselves in Roxbury, near Boston, where Chester was promoted to Captain of the Ninth Company in the Second Connecticut Regiment for his courageous acts. In June 1775, during the Siege of Boston, Chester and his company saw many American troops retreating from the Battle of Breeds Hill. He encouraged those troops to join his company, but when the deserters continued to retreat, he threatened to shoot them. The fleeing American troops saw that Chester would act on his threat and reversed their retreat. After the siege ended, Chester was discharged from military duty in December, only to re-enlist one month later upon General George Washington’s request. In January of 1776, he was promoted to Major and returned to Boston to battle the British foes in the ongoing siege. In June, Chester was appointed a Colonel and went to New York City to prepare for the coming British invasion that occurred on August 27, 1776, the Battle of Long Island. It only lasted two days before General Washington and his troops, including Chester, fled by boat in the night. Chester’s last battles were the battles of Trenton and White Plains. As 1776 came to an end, so too did Chester’s military career. He retired and became a Justice of the Peace, returned to his wife Elizabeth Huntington Chester, started a family, and worked in the General Assembly. After the war, Chester also became a Judge of Hartford County Court in 1785, and worked as a Supervisor of the United States Department of Revenue for the District of Connecticut. Colonel John Chester passed away on Nov. 4, 1809, at the age of 61 from natural causes. 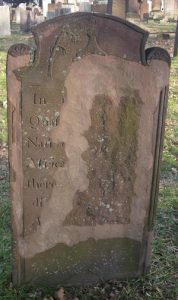 Quash Gomer (1731-1799) was an African from the western country of Angola. A slave ship brought him to America in 1748, at the age of eighteen. Gomer was one of the known 34,000 slaves brought to America after 1625 and one of the ten million to twelve and a half million Africans taken and used in the Trans-Atlantic Slave Trade since 1501. The slaves were brought to America because at that time, the Colonists depended on agriculture to survive, and they needed people to cultivate the lands to make a profit. Native Americans who became prisoners of war, were used as slaves, but the diseases and epidemics dwindled their numbers. The colonists used African slaves because they were more dependable than the enslaved Native American slaves, as Africans did not know the land as well and were not as successful at escaping. Slaves wanted to flee because they remained the property of their Master until the slave’s death or sale. On a few occasions, slaves were granted their freedom and, in the 1700s, there were various approaches. The two most common ways were that they purchased it or served in the Revolutionary War. Of the four hundred slaves who fought in the Revolutionary War, three individuals were from Wethersfield. Most slaves who mustered in an active militia during the Revolutionary War earned their freedom in return for their service. Instead, Gomer bought his freedom from his Master, John Smith, in 1766 for 25 pounds. After he acquired his freedom, he married and had children. His family was one of the five free African families listed in Connecticut’s 1790 census. Gomer and his family remained in Wethersfield for the rest of their lives. When he passed away, he was buried in the Ancient Burying Ground next to other African Americans. Only a few gravestones from the eighteenth and nineteenth century still exist in this section. Gomer’s gravestone inscription reads: “In memory of / Quash Gomer: a / Native of Angola in / Africa, brought from / there in 1748, & / died June 6th 1799, / Aged 68 years.” Quash Gomer had been free for thirty years before his death.

Image of Quash Gomer’s gravestone in the Pratt Extension of the VIllage Cemetry Ground.

EZRA HOSKINS AND HIS DEMISE IN CONNECTICUT STATE PRISON 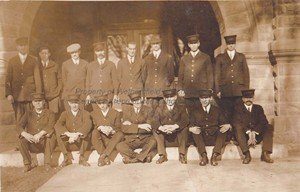 Ezra Hoskins (1767 – 1833) was from Simsbury, Connecticut. He was a night watchman at the Connecticut State Prison in Wethersfield, Connecticut from the prison’s opening in 1827 until his untimely death in 1833. Previously, he was a night guard at the Newgate Prison in East Granby. When Newgate closed in 1827, Hoskins transferred to the new State Prison at Wethersfield.
The new prison in Wethersfield was a single building with a four-tier cellblock built in 1826 and 1827. Each prisoner’s cell was three and a half feet by seven feet and was equipped with a bed and bucket for waste disposal. During the day and evening, guards like Hoskins enforced strict silence. They did not allow the prisoners to speak at all.
Hoskins’ job as the night watchman required him to walk the floors of the cellblock periodically to make sure all the doors were securely locked and that the prisoners were in their cells. On the night of April 30, 1833, Hoskins was killed by four convicts who were trying to escape. As Hoskins was making his nightly rounds, a prisoner unlocked his cell door with a makeshift key and followed behind him. The prisoner let out three others after Hoskins passed their cells. Those four prisoners then obtained a metal pipe and waited for Hoskins to pass. When he approached, two prisoners stepped from their hiding place and beat him to death with a metal pipe. Hoskins did not defend himself as he was partially deaf and did not hear the prisoners approaching. The prisoners were apprehended after Hoskins was found dead, and two of the convicts were sentenced by a grand jury to hang for the murder, while the other two served extended sentences. 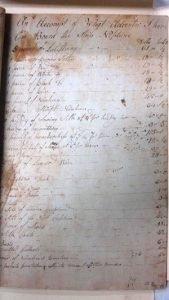 Captain John Hurlbut (1770-1808), like so many other men in Wethersfield, was a seafarer. Many Wethersfield men were seafarers because the town was located on the shores of the Connecticut River and the town’s people produced many goods that other nations wanted to import. The Wethersfield Red Onion, pipestaves, pigs, bricks, and potatoes were some of the most popular items exported from the small town. While the primary ports of call for trade with Wethersfield sailors were in the West Indies, Hurlbut’s journeys took him even farther around the world. Between 1796 and 1799, Hurlbut held the position as first mate on the ship Neptune, the first American ship to circumnavigate the world. The 350 ton vessel was built in New Haven for Merchant Ebenezer Townsend. Hurlbut was one of the forty-five member crew under Captain Nathaniel Greene, a New Haven native. The Neptune departed with her crew from New York in 1797 and headed to the Falkland Islands off the coast of South America in the Atlantic Ocean for the seals that inhabited the area. The Neptune then headed to the islands in the South Pacific where seals were plentiful. On this single voyage they had killed 80,000 seals for their skins. The ship continued on to Canton, China, which was the only port open to trading with the West at that time. Seal skins were a valuable commodity in China, and the traders received extravagant sums of money for the skins. In Canton, the crew of the Neptune was given $280,000 to split amongst themselves. While in the Far East, Hurlbut bought many items, such as a tea caddy, (generously donated by Lee Kuckro in the memory of Anne Kuckro to Wethersfield Historical Society in 2010) a dressing table, cloth, and a set of porcelain. Before the men departed China, Captain Greene died, and Hurlbut, as the first mate, assumed the position of Captain. The successful voyage lasted almost three years, and the Neptune brought back “one of the richest cargoes.” Once Hurlbut returned home to Wethersfield, he married his fiancée Ann Wright and bought the house at 212 Main Street, today known as the Hurlbut-Dunham house. Hurlbut did not remain at home for long and sailed once again on the Neptune in 1800 for another sealing mission that proved to be just as profitable as the first. He died in 1808 in New York City from smallpox.

Image of a page from First Mate John Hurlbut’s log from the ship Neptune.

SOPHIA WOODHOUSE AND HER LEGHORN BONNETS 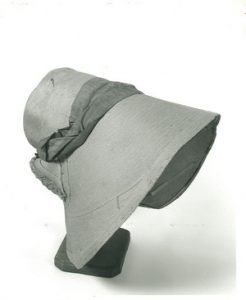 Sophia Woodhouse Welles (1799 – 1883) was an entrepreneur who made her mark by altering the technique of American bonnet making. Prior to her marriage to Mr. Gurdon Welles, she had already established a profitable business manufacturing Leghorn Bonnets. During the first quarter of the nineteenth century, Leghorn bonnets imported from Italy were the headwear of choice for most women in the United States. In most cases, an interchangeable ribbon went around the top of the bonnet, and feathers and other items could be placed on it as well. The decorations were interchangeable, which means the bonnet could be worn with almost every outfit.
The bonnets were imported from Liverno (Leghorn, in English), Italy, giving the bonnet its name. These bonnets were expensive to buy, which inspired many fashionable women to make their own bonnets. While some women only mimicked the Leghorn fashion, a few modified it by the way they braided the straw, the materials they used, and their own style. Sophia Woodhouse was one of these women, creating a new technique for manufacturing the bonnet and making it more fashionable and practical. She used a native plant in Wethersfield known as spear-grass, found in the meadows near the Connecticut River, as the main component of the hat. Woodhouse improved the structural integrity of the bonnet by her method of treating and bleaching the plant. This innovation won her two awards, one from the Harford County Society for Promoting Agriculture and Domestic Manufacturers in Hartford and another from The Society of Arts of London, England. She also applied for and received a U.S. Patent under her married name of Mrs. Gurdon Welles.
Louisa Catherine Adams, the wife of President John Quincy Adams, received one of Woodhouse’s bonnets and wore it on many occasions. Due to this publicity, the bonnets became popular, and many women in the United States and in England began buying Sophia Woodhouse bonnets. Because of the demand, Woodhouse hired local Wethersfield women to work in their homes and replicate her bonnets, thus beginning a cottage industry. After Woodhouse’s marriage to Welles, her focus shifted from business to family, but she still made a small quantity of her bonnets until 1835. In that year, a fire consumed her shop and she closed her business. Sophia Woodhouse Welles influenced nineteenth century fashion across the country, and several Woodhouse bonnets survive in museum collections, including one at Wethersfield Historical Society.