After a year without the thrill and excitement of live music, Wethersfield Historical Society is delighted to host the return of the Keeney Koolers Concert Series, Tuesday evenings in July, beginning on the 13th.  The society is especially grateful to Joan and Mike Munroe who stepped up to support this event when we lost our traditional funding to the additional demands placed on our grantors by the pandemic.

Thanks to their generosity, there is no admission charge. Performances take place at 6:30 pm on the front lawn of the Keeney Memorial Cultural Center (200 Main Street). Bring a blanket or lawn chairs, a picnic supper, and your dancing shoes. In the event of inclement weather, concerts will move indoors to the ballroom on the second floor of the Keeney Center. Join us before the concerts for even more fun for the little ones. From 5:30 pm to 6:30 pm Wethersfield Historical Society will be hosting select children’s crafts.  Crafts can either be completed on-site or taken home in a prepared take home bag.

Keeney Koolers Concert Series is thrilled to present the fresh new sounds of Streetlight Shakers to the Wethersfield audience for the first time. For more about the band and a sample of what they bring to the table, click here for a link to their website. 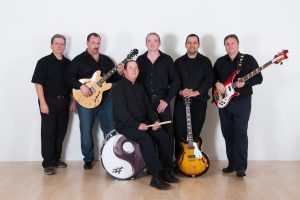 Keeney Koolers audience favorite Number Nine returns to the showmobile stage this season. Originally founded in 2006 as part of a charity event to help fund music education in their local elementary school, Number Nine has expanded well beyond their initial mission. Now performing on a regular basis, the band continues to explore all eras of the Beatle’s oeuvre, from the early hits of the Fab Four to recreating their later studio work, Number Nine has grown beyond their founding four members to a roster of seven with room for additional guest artists when called for. Come Together and enjoy the fact that things are Getting Better. You won’t need a Ticket to Ride –  admissions is free!

Peter DiGennaro, (keyboards), Brian Jenkins (bass), Mike Frost (guitar), and Brendan LeMieux (drums) make their Keeney Koolers debut as The Tricky Bits. Pete DiGennaro leads this rocking quartet (and the Keeney Koolers audience) on a musical tour through the funky “tricky bits” of rock and roll in the ’80s and 90’s. There are sure to be some of your favorites in the set list, some hidden gems you may have forgotten, and some hits you have been waiting to hear for the first time.