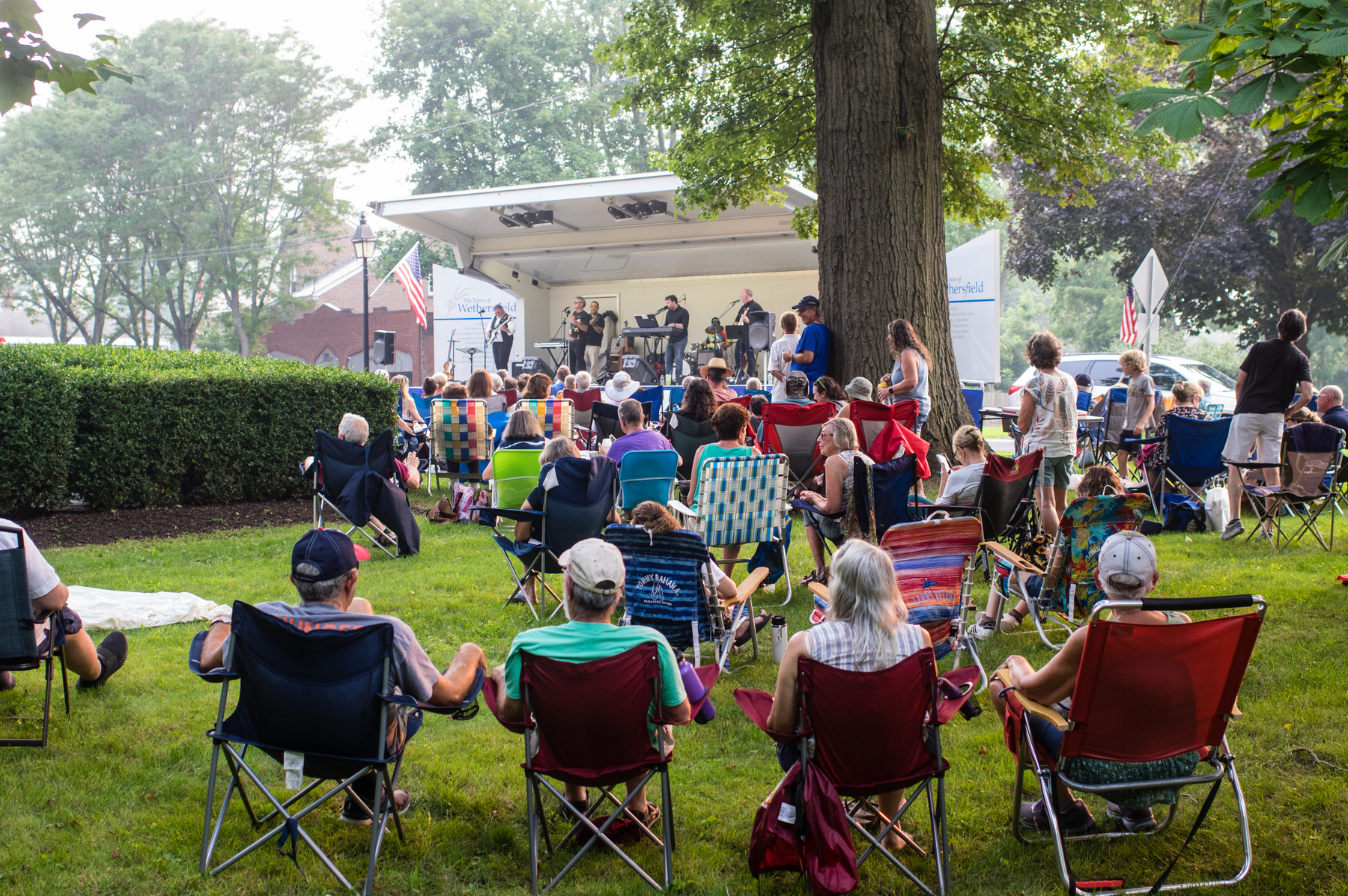 In what is one of the most popular events on Wethersfield Historical Society calendar, the Keeney Koolers Concert Series returns to the front lawn of the Keeney Memorial Cultural Center (200 Main Street, Wethersfield, CT). This summer, two acts are making their series’ debut and, due to popular demand, another band is back for a return engagement. As always, concerts take place on the showmobile stage at 6:30 pm. Bring your lawn chairs, blankets, coolers, and your dancing shoes. In the event of inclement weather, concerts will move indoors to the Ballroom at the Keeney.

Thanks to the generosity of the Robert Allan Keeney Memorial Fund at the Hartford Foundation for Public Giving, there is no admission charge for any of the Keeney Koolers concerts. Performances take place at 6:30 pm on the front lawn of the Keeney Memorial Cultural Center (200 Main Street). Bring a blanket or lawn chairs, a picnic supper, and your dancing shoes. In the event of inclement weather, concerts will move indoors to the ballroom on the second floor of the Keeney Center. Join us before the concerts for even more fun for the little ones. From 5:30 pm to 6:30 pm Wethersfield Historical Society will be hosting select children’s crafts.  Crafts can either be completed on-site or taken home in a prepared take home bag. According to their website, Ed Fast & Conga Bop use “Afro-Cuban influenced rhythms and hard-bop harmony fused to create unique, soulful originals and creatively arranged jazz standards”. Anyone who has heard them perform knows exactly what these words mean and how short they fall of adequately describing the experience of hearing this talented and virtuosic ensemble live. Led by Hartt School-trained percussionist Ed Fast, Conga Bop bring a sophisticated sensibility to their playing with enough edge and rhythmic drive to hold your interest. Their last appearance for the Keeney Koolers audience was in 2019. If you were there, you know the treat you are in for. If you weren’t, don’t miss what is sure to be a memorable performance. In a fortunate turn of events, Patty Tuite and her manager Jim Whitehouse were in attendance at one of last year’s Keeney Koolers. Jim gave me a copy of Patty’s latest release “Consider This”. After hearing the CD, it was obvious that The Patty Tuite Group’s synthesis of blues, jazz, and rock made them an ideal fit for the Keeney Koolers Concert Series. Join WHS in welcoming them to the showmobile stage for the first time. With possibly the coolest band name ever, Mass-Conn-Fusion also debuts on Keeney Koolers this summer. Founded by bassist James Healy at the UCONN Music Department, Mass-Conn-Fusion brings forty years of history and experience to the showmobile stage. The band’s extensive repertoire has something for everyone, featuring Motown, R&B, and Funk along with hits of the 60’s through the present. The full ensemble features female lead vocalists, horns, and a solid rhythm section.