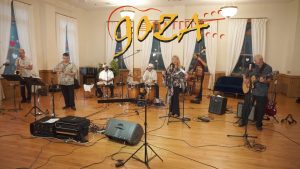 Good things come to those who wait! The second concert on this year’s Keeney Koolers Concert Series is now available and WHS is delighted to present Goza Latin Band recorded live in the Keeney ballroom.

Goza takes its name from the Spanish word for “Joy”. Video Producer Jessica Glass and Audio Engineer Dave Raymond have done an outstanding job in capturing the exhuberance, rhythmic intensity, and joy that are the essence of every Goza performance. WHS would like to thank the Robert Allan Keeney Memorial Fund at the Hartford Foundation for Public Giving for making the Keeney Koolers Concert Series possible.