Currently on view in the Wethersfield Museum’s Watson Gallery, River, Land, and Sea: Wethersfield’s Maritime History lends itself to a wide variety of complementary programming, both historical and cultural. Throughout 2022, Wethersfield Historical Society is presenting a series of lectures and concerts designed to give attendees a more complete understanding of the crucial role Wethersfield’s maritime trade played in the town’s development and a better appreciation of the culture of the times.

Programs are scheduled to take place on select Tuesday evenings at 7:00 pm. All lectures and concerts will be given in the Keeney Memorial Cultural Center, 200 Main Street, Wethersfield, CT. Admission is $10.00 for the General Public and free for WHS members. Ample free parking is available in the lot behind the Keeney Center. This programming has been made possible in part by grants from CT Humanities and the Robert Alan Keeney Memorial Fund at the Hartford Foundation for Public Giving. 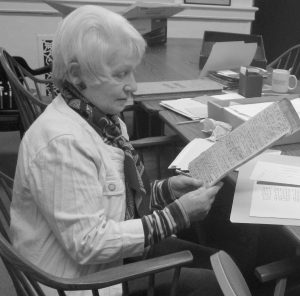 Wethersfield Historical Society Research Librarian Martha Smart opens the series with “The River, The Sound, and The Sea”. Ms. Smart will speak on early Wethersfield’s role in the competition for the trade of Long Island Sound among Europeans and Native Americans; the West Indies trade and its basis in slavery; and the evolution of trade into the 19th Century. Wethersfield Historical Society presents Rocky Hill Town Historian Robert C. Herron speaking on “Maritime Rocky Hill” in the second  installment of this series of lectures and concerts. Mr. Herron will speak about Rocky Hill’s maritime history, from its beginnings as a section of Wethersfield through its incorporation as a town in its own right in 1843 to the present day. The event will take place in the Keeney Ballroom. This event is also free for current members of Rocky Hill Historical Society. Curator of Social Maritime Histories at Mystic Seaport Museum to the River, Land, and Sea: Wethersfield’s Maritime History series. Dr. de Barros Gomes’ talk will concentrate on the unique experiences of the large number of Black men – both enslaved and free – who were employed at sea throughout the eighteenth century in Connecticut. She describes the climate in the following words. “Maritime work provided a space of integration, an arena of relative freedom, and was largely merit based. By exploring the historical contexts that Black seafarers navigated and individual stories of Black mariners from Connecticut, we can explore Black maritime culture and communities. We can also begin to understand how these men, their families, their communities and their legacies became, as James Rose asserts ‘an integral part of the historical tapestry of the state of Connecticut.’” Wethersfield Historical Society presents Chris Menapace, Senior Educator at Discovering Amistad. His talk, Amistad; Journey to Freedom, will cover the story of the Amistad rebellion from its beginnings in Sierra Leone with the kidnapping of Mendi Africans. He will discuss the Mendi’s experiences on the Tecora as they endured the middle passage, their rebellion on board the Amistad ship, their journey to Connecticut, and the subsequent trials in Connecticut and the Supreme Court. Menapace’s  presentation will focus on the themes of dehumanization, resistance, and legacy and how this story still impacts us today. Wethersfield Academy for the Arts and Wethersfield Historical Society continue their “Nexus of History and Art” series, opening 2022 with a presentation by painter Russ Kramer speaking on his dynamic oil paintings depicting historic America’s Cup races and other yachting scenes. This theme ties in nicely with the society’s current exhibit River, Land, and Sea: Wethersfield’s Maritime History and its companion lecture and concert series. 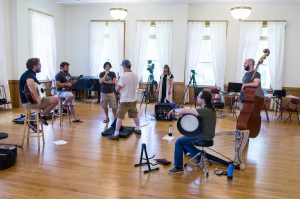 Wethersfield Historical Society is pleased to welcome the Jolly Beggars back to the Keeney Memorial Cultural Center. Long a favorite of Wethersfield audiences, the Beggars’ take on traditional Celtic music is an ideal fit for the River, Land, and Sea: Wethersfield’s Maritime History cultural series. With Ireland’s long and tempestuous relationship with the sea, it’s no wonder that a significant part of the Jolly Beggar’s repertoire is well-suited to telling the tales of seafaring men. Beyond that, who doesn’t love a good tune? The Jolly Beggars will be presented Cabaret-style. The audience, if of age, is welcome to BYO. Wethersfield Historical Society welcomes Aquinnah Wampanoag Artist, Educator, and Performer Jonathan James-Perry to the Keeney Memorial Cultural Center.  Mr. James-Perry is scheduled to speak on the Indigenous presence on the land and sea in the Northeastern portion of the continent. He will speak to the complexities of Indigenous relations with one another, colonization efforts, and cultural continuity. An articulate and thoughtful speaker, he has lectured on Eastern Woodland  traditions for over 15 years at both regional and national venues which have included the Peabody Essex Museum, the National Museum of the American Indian, the Mashantucket Pequot Museum and Research Center, Harvard College, and Brown University.

From the speaker: Jonathan Perry is an Aquinnah Wampanoag culture bearer, leader, historian, artist and professional speaker. He is grounded in the traditions of his ocean-going ancestors. His material work embodies the refined quality of that of his ancestors, while still drawing upon his experience in a contemporary society. Jonathan’s pieces reflect balance within the Natural World, incorporating stories, effigies, and symbology of Wampanoag traditions. He is currently serving his sixth, three-year term as Councilman for the Wampanoag Tribe of Gay Head (Aquinnah). Jonathan works diligently to enforce and uphold the sovereignty of his tribal nation as well as to maintain cultural continuity among his tribal citizens. He has over fifteen years of experience working within the Tribal Historic Preservation Office, with the responsibility of protecting and preserving cultural sites of significance throughout southern New England. He currently works for the Elders Council at the Mashantucket Pequot Tribal  Nation to ensure cultural continuity and preservation within the community. Jonathan has over twenty years of experience in the research and historical interpretation of Eastern Woodlands Native culture and art. He has worked with various non-profit and tribal organizations in exhibit design and cultural consultation based on traditional Wampanoag knowledge, symbolism, and values. Jonathan was most recently awarded the 2017 First People’s Fund Jennifer Easton Community Spirit Award for his work in reviving Wampanoag maritime traditions.

Independent Researcher Sandra Ulbrich comes to the Keeney Ballroom to lecture on the life of Justus Riley (1739-1824), a largely forgotten patriot and merchant, but his contributions to Wethersfield, Connecticut, and to the United States had a profound effect during the time in which he lived (1739-1824). By locating artifacts and following paper trails throughout the United States and England, a picture emerges of a man who became one of the richest and most respected merchants of the entire Connecticut River Valley after the American Revolutionary War. Discussion will focus on his rise from a middling status through privateering, his merchant activities including his fleet of almost one hundred vessels and Caribbean trade, his familial and social connections, his participation in local and state affairs, and his legacy. A sub-theme will show how his surviving artifacts point to a “new American” after the American Revolutionary War and give clues of his material wealth.

Sandra P. Ulbrich is an Independent Maritime Historian and Researcher who has studied Wethersfield merchant Justus Riley and the context in which he lived since 2003. Her research has taken her across the United States, to the Caribbean, and to England and France. Sandra has presented at many maritime conferences, with the first at the National Maritime Alliance Conference in 2010. Since then, she has presented in St. Louis at the 2018 National Maritime Historical Society and in 2019 in New Bedford at the North American Society of Oceanic History. Her talks focus on trade along the Connecticut River, Wethersfield privateers, the Quasi-War and about Wethersfield vessels. She has published work about the brigantines Patty and Commerce, a Wethersfield minister, and a Hartford artist. She is currently working on two books relating to Justus Riley, and a book of poetry. Sandra has a BA from the University of Connecticut, a MA from Wesleyan University and was the recipient of the Professor Samuel Hugh Brockunier Prize for Social Studies in 2004.

Wethersfield Historical Society presents Peabody Essex Museum Associate Director – Collections, Karina H. Corrigan as part of the River, Land, and Sea: Wethersfield’s Maritime History series. She is also the H.A. Crosby Forbes Curator of Asian Export Art. Ms. Corrigan will speak about the thriving and cosmopolitan Chinese port city of Guangzhou and its impact on life in early 19th century Connecticut. Known to foreign merchants as Canton, Guangzhou was the only port city in China open to foreign trade for over 100 years. This lecture explores the logistics of early American trade with China, the principle luxury goods such as tea, silk, porcelain and lacquer imported from Guangzhou, and the profound impact this trade had on people’s lives in Connecticut during the early 19th century. Fresh from their standing engagement Monday nights at Essex’ world-famous Griswold Inn, The Jovial Crew are making the trip up the Connecticut River to perform on the showmobile stage in front of the Keeney Memorial Cultural Center. Their repertoire of “songs and tunes of the sea, pub, and shore” make them the ideal performers to close out the Maritime Wethersfield Cultural Series. Bring your lawn chairs, blankets, and coolers and make an evening of it. Admission is free. In the event of inclement weather, the performance will move indoors to the Keeney Ballroom.

Join WHS and Sandra Taitt-Eaddy for an evening of exploration into the relationship between Bridgetown and Wethersfield, two former colonial trading posts. Sandra Taitt-Eaddy is a Connecticut based public historian, educator, and genealogist whose roots are in the island Barbados, one of Wethersfield’s main colonial trading partners. She will discuss common themes between Colonial Barbados and Wethersfield, what the records show, her Connecticut tall ship maritime experience and her migration experience from Barbados to Connecticut.