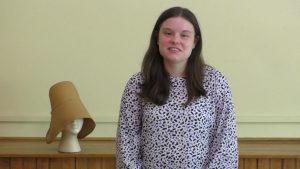 Wethersfield Historical Society curator, Kristina Oschmann, shares short profiles of six of the notable women from Wethersfield’s history featured in the Wethersfield Museum’s upcoming exhibit “Women of Wethersfield”. Scheduled to open in mid October 2020, the exhibit is being offered in conjunction with the 100th anniversary of women’s suffrage in the United States. Meet Sophia Woodhouse Welles, Emily Augusta Deming, Mary Goodrich Jenson, Sarah E. Wood, Ann Pimm,  and Betsy Johnson – six women with Wethersfield ties whose lives had a significant impact on the town and the wider world beyond.

This content was made possible in part by a grant from the Robert Allan Keeney Memorial  Fund at the Hartford Foundation for Public Giving and the generosity of our members.

Now that you have been introduced to these six luminaries in the video, try your hand at the Wethersfield Women Scavenger Hunt.

Directions: This Wethersfield woman conducted story research that would eventually be used to create the movie Frozen (2013). Search for clues in the following places in Wethersfield to decode her name. Click here for your own PDF copy of the hunt. You can download and print it or work from your mobile device. Good luck!

Learn more:  What follows are a series of links and recommendations to curated sources for additional detailed information about Women of Wethersfield.