Due to Public Demand

In his memoir "Wethersfield Summers" published in "Articles from the Community" on the Wethersfield Historical Society website Dr. Tom Gworek recalled,

"We had little trouble crossing the barbed wire fence and headed for the small grove of trees a few hundred yards off navigating between thistles and cow droppings along the way. 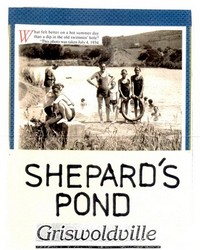 "Ahead of us lay "Shep's" pond. We never knew or cared who "Shep" was but that was the only name we ever used for our swimming hole. The side we approached was very shallow and always covered with green algae and accompanied by one or two cows drinking."

However the same June 25, 1942 Hartford Daily Courant that foretold the opening of the park also recounted a 1937 State Board of Health report on possible swimming places in Wethersfield.  "The report indicated that the Griswold Pond and the Mill Pond which were considered at that time were not free from pollution and had insufficient flow of water at some times of the year so that the town would be better satisfied by building a concrete pool rather than investing in the development of the ponds."  Town Engineer Philip O. Roberts however reported that it would be impossible to obtain the steel necessary for such a project - presumably because of WWII material shortages.

"Shep" in fact was Hiram Shepard.  And in July 1943 and April 1944 John Risley and Hattie Churchill Shepard deeded "Shep's Pond" to the town of Wethersfield in the form of two adjacent parcels of land totaling almost twelve acres for "Ten dollars and other valuable considerations" each. In addition to the water hole, this land now includes the two northernmost ball fields on the west side of the park. 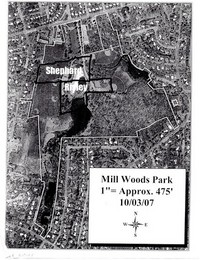 The remainder of what was to become the Mill Woods Swimming Pool (along with a portion of the Upper Pond) was donated - also for $10 - to the town in May of 1943 by John H. Risley.

At the end of August "bank run sand" at 90 cents per ton was placed on the bottom of the basin, and the Clark Construction Company completed the bathhouse for $5,524.  An undated newspaper clipping at the Parks and Recreation Department says that the D.V. Frione Construction Company, Inc. of New Haven was awarded the contract "for excavating and stripping at Mill Woods...the first step toward development of swimming and park facilities at Mill Woods."  Just two-thirds of the eight-acre swimming pond was prepared at a cost of $3093 ($1,000 less than planned) in order to meet the budget allowance from the town.

A detailed map of Mill Woods was requested from the Town Planning Department "in order that cows pastured in abutting property may be kept out of all park property as the work progresses." And in January of 1945 the Park Board gibed the Town Planning Department to "get busy on this matter" lest the swimming pool not be ready on time.  In May Ellis Backman was appointed as the first Park Superintendent.

The June, 1945 minutes of the Park Board noted that, the swimming area was originally conceived as a post-war project, "but public demand as reflected by the Recreation Committee and school authorities resulted in earlier action."