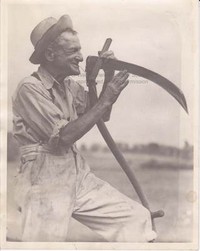 There used to be town meetings in Wethersfield.  At these meetings all town matters were presented and discussed.  One man could be counted upon to get on his feet whenever any major appropriation came to the floor.  He was a solidly built man of medium height, neat but not flashily dressed, with the red brown face of one who lived in the sun and wind, rugged features and reddish hair.  He would categorically condemn the appropriation as unnecessary, too expensive, ill considered and unfitted for its purpose.  If it were for a worthy project he might end up by saying that our schools, roads or whatever deserved the best.  His remarks were, however, not considered as mere ranting, for they contained considerable common sense.  One might hesitate to present any matter whose need could not be well defended.  Seldom were appropriations defeated or altered because of this remarks, but he did serve to keep matters within bounds.

Harry Leslie Welles was the oldest of eight children born to John Leslie Welles and Mary Helen Griswold who lived on Griswold Street.  J. Leslie Welles was a dairy farmer, well educated and of sufficient means to give all of his children a college education.  Neither Harry nor any of his brothers had any love for dairy farm work, and certainly Harry was equipped for better things.  It wasn't the actual work that bothered him; he enjoyed being with people.  For some reason he chose to act the part of a rough countryman.  His education was apparent in papers which he wrote for the Grange.  These were well considered and in the finest of language.

He had to make a living, so he chose a rather unusual crop, horseradish.  There were several in that business in Wethersfield, but he became by far the best grower and seller.  This plant, indigenous to the Caspian region, was introduced into the United States before 1800 for use as a condiment.  When grated and treated with vinegar it has a fiery flavor greatly relished by a few people.  It is particularly suited to use with raw oysters and clams.

Harry grew horseradish in quantity, never adulterated it with turnip as some did, and built up such a considerable trade that he was know as "the horseradish king.'  His product could be found in many groceries and restaurants and was always fresh and fiery.  Whenever there was a dinner or banquet in town Harry donated a liberal supply.  He had a unique method of retail sales at the farm.  A wooden bucket, now at our Old Academy Museum, would be found setting on his back stoop.  Within was a tin cup as a measure and beside the bucket another cup empty.  You would lift the cover of the bucket, measure as much as you wished, and leave a coin in payment in the empty cup.  Many used this honor system, as it provided absolutely fresh grated horseradish in the best of vinegar.   It isn't very good unless fresh and with sharp vinegar.

When Rural Free Delivery of mail came to be, Harry secured the position of carrier and delivered mail by horseback from saddlebags.  The Parcel Post came along and he used a queer little buggy, so small it had no room for a passenger.  He enjoyed this as he met so many people.  He was always friendly and obliging, so much so that he was in great demand for all sorts of jobs.  At Christmas time no one was in such demand to play Santa Claus as Harry.  In the "Horribles" parade on 4th of July he always had some kind of outrageous skit aided by a neighbor "Bill" (T. William) Knapp.  It might be such as one of this pair dressed as Uncle Sam riding on top of the R.F.D. buggy.  With this neighbor he often had a bet on the outcome of political elections.  One might have to wheel the other the length of Griswoldville Street in a wheelbarrow.

It is quite probable that he played the part of a rough countryman so much that it became his whole life.  No one can say that he did not accomplish a great deal for the town in this part.  He was elected to the legislature and served to our credit there.  He lived, practiced and preached economy, not without the enjoyment of life.  Everyone was his friend.

Go the "About the Author"