A Wooded Setting of Rare Beauty

"The second known corne-mill in the New-England, operated by Leonard Chester 1637-48 and the saw-pit were located upon Two Stone Brook which coursed with a wooded setting of rare beauty, owned by the descendents of early families.  'Many person had suggested its use as a park' under the leadership of L. Wayne Adams who had previously obtained option from interested owner, Mr. Frederick I. Griswold, upon a land-locked 6/12 acre section in the middle of the tract. [L.W. Adams was the son of Luther Walton Adams, the nephew of Sherman W. Adams, and one of the prime movers in founding Wethersfield Historical Society.] A group of eight townsmen was organized in April 1939 to complete the purchase. ("Origins of Our Parks" by Jared B. Standish in the 1953 Town Annual Report) 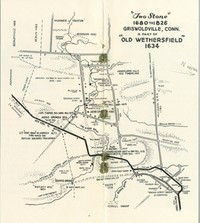 On a comfortably warm June 2011 afternoon my wife Marsha and I walked with Martha Mayer of the Griswoldville Preservation Association to the site of that "corne-mill".   We began our trek in the park, at the parking lot by the skateboard facility.  The mill remnants are located in an easily accessible but difficult-to-see section of Mill Woods Park - beyond the outfield fence of the Fusco softball field, down a short narrow path, and through the waterside vegetation to the banks of what is today commonly called Goff Brook.  A few stones from the original mill and the earthen dam are visible, with a little assistance from Martha.  The stream then turns right and runs in an easterly direction over a cement dam built in the mid 1800s into what is now called Bell Pond.  We walked to the dam and entered the pond side at the foot of the waterfall by crawling though an opening in the chain link fence that marks the boundary of the park.

We then retraced our steps and drove over to the dog park where we left our vehicles and headed off on foot to the southern end of Mill Woods Park. Walking along the eastern edge of Winding Brook Turf Farm we slogged through some watery land following the path of Goff Brook and came to what is generally called Griswold Pond on the western side of Randy Lane.  Upstream from the dam Martha pointed out the former site of the Griswoldville Ice House on a small spit of land into the pond.  The wooden building, filled with sawdust to preserve the ice, went up in flames in the 1930's and was not rebuilt.

From there we walked out Cheston Circle to a location near the spot where Two Stone Brook goes under Griswold Road, crossed the street, and walked northward to the former site of the second mill on our tour, midway in the turn in the road.

This mill belonged to Captain Thomas Williams - the son of immigrant English parents whose mother steered him into blacksmithing rather than working in the mills, which trade led him to a life at sea sailing out of the Fairhaven/New Bedford area where he quickly rose through the ranks, ultimately to Captaincy, moved to Wethersfield in 1859 and bought the mill in 1866 in order to control the water privileges in the area.  The mill was in what is now the backyard property of two private homes, and with the thick spring leaves we were not able to actually see much of the remains.  Martha did tell us however about walking by this spot on a winter morning and, because of the conditions, being able to clearly see that the distribution of riparian vegetation east of the stream matched the square outline of a mill pond shown on an historic map (1869).

Next we turned up Highland Street and onto private land on which Martha is allowed to conduct her tour.  In the back yard was a stone spillway connected to an earth dam, which had created a former mill pond.  Some of the stones and wood from the original earthen dam that helped control the water there in the 1800's still remained.

We then walked down Stocking Mill Road and turned briefly onto Terrywood and the former location of the Griswoldville Manufacturing Company.  Portions of the former mill, which burned down in 1847, were clearly visible.

Photos of this walk taken by Marsha are posted at the end of this piece.  More information on Griswoldville and its mills is available in Donna Hemmann's "Articles from the Community" on the Wethersfield Historical Society website.  Walking tours of the mills are available through the Griswoldville Preservation Association.