"Acquisition of Mill Woods property for conversion to a public park by CWA [Civil Works Administration] labor is impossible because owners either will not sell or else hold their land at prohibitive prices First Selectman Alfred W. Hanmer reported at a meeting of the Wethersfield Men's Business and Civic Association" in February, 1934. 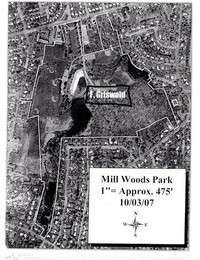 Then, on April 29, 1939, Frederick I. Griswold deeded 6.25 acres to the town of Wethersfield with the stipulation that the land be used for park purposes, reverting to him or his heirs should that not occur. According to the Hartford Daily Courant "The land in question....consists of woodland almost entirely free of underbrush and intersected at one end by the stream known variously as Two-Stone, Mill, Goff or Spring Brook."  (The multiplicity of names for geographic features makes the researching of history in our town all the more interesting.)

Griswold was allowed the rights to any fallen timber on the donated tract removed before June 1.  Today this original Mill Woods bequest comprises roughly the area wherein we walked to the first mill. Additional land was said to be available to the town for a price of around $2,000 but none was acquired at that time.

Conversations about the development of Mill Woods Park were a regular feature at Town Plan Commission meetings for the next several years.  In 1939 and 1940 the issue became intertwined with the building of a road proposed to run southward from the intersection of Wolcott Hill Road and Prospect Street to Maple Street, ending two hundred feet southwest of the east border of the Burgey property.  Much of the debate centered on whether to have a detailed plan for the facility prior to purchasing the land, or acquiring the land and then planning it, like the city of New London was doing with Ocean Beach Park.  Most of the desire expressed at the meeting was for a swimming area.

Three years later at a town meeting on July 27, 1942 the Town Plan Commission was authorized to secure as much acreage of Mill Woods as necessary for future public use as a Recreational Center.  In August of that year Mill Woods Park, consisting entirely of the original Griswold bequest, was opened for public use.

Entry to the recreation area was via a ten-foot wide strip of land leased for $1.00 from John H. Risley that ran 1789 feet easterly from Griswold Road along the dividing line between Mr. Risley's and Alfred P. Brighetti's properties.  This right of way was limited to foot, bicycle and horseback traffic, and the public was urged to take precautions not to trespass on the privately owned property that surrounded the park.  John Willard, Park Board Chairman, said that plans were under way to equip Mill Woods Park with fireplaces, picnic tables and "settees" as soon as possible.

Between the official entrance and the "park" lay "Shep's Pond." - the official-unofficial swimming hole for kids in the south-central part of Wethersfield, and thus an obvious candidate for expansion of the park.