All According to Plan

One-half century later, on August 8, 1995 Wethersfield Mayor Daniel Camilliere proclaimed, "WHEREAS, Now in 1995, attendance records continue to be set with over 40,000 people of all ages utilizing the Mill Woods pool facility as a place to swim, socialize, relax and generally enhance the quality of their daily lives... HAPPY FIFTIETH BIRTHDAY TO MILL WOODS POOL." 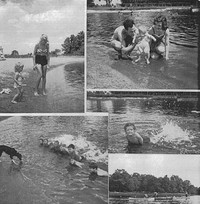 Cake was served.  There was a sand castle contest, water events, and free admission to all town residents and their guests.  Doris Harwe was there in her swimsuit.  She was also there, similarly attired, on June 16, 1945 - the day Mill Woods Pool first opened under the watchful eyes of Park Superintendent Ellis Backman and his staff of life guards: Ann Tewksbury, Tom Lasher, Roland Breaux and Ray Parent.

The Wethersfield Post reported that Ms. Harwe recalled moving to Wethersfield in 1940 as a child and finding nothing to do - no playgrounds, no swimming, nothing.  Most families had one car, and most mothers did not drive then anyway - so she had to wait for the weekend and her working father's availability to go for a trip to the beach or a lake.  Then Mill Woods Pool opened and things changed - just as Herbert S. Swan predicted it would, back in 1928.

Swann, a City planner from New York, was hired by the Town Planning Commission - James B. Madigan (Chairman), John S. Buck, George S. Francis, F.B. Williams (Clerk), Edward W. Willard, Kenneth L. Fox, and A.W. Hanmer (Ex-Officio) - to develop a strategy for successfully converting the town of Wethersfield from the semi-rural community it had become in the early Twentieth Century to a densely built suburb of Hartford.

"Without a plan the city builds only for today - there is no attempt to foresee and provide for the needs of tomorrow....how fortunate it is that Wethersfield is able to develop a constructive plan before the whole town has been ruined through piecemeal planning."

The general thesis of the document was that Wethersfield needed to leverage its geographic proximity to Hartford by becoming an attractive residential area with good transportation thoroughfares to and from the capitol city.  Part of this would be accomplished by having well-placed parkways and well-planned parks.

In the new residential Wethersfield "nearly every family will possess an automobile.  The whole countryside can, therefore, be readily reached within a few minutes of every home."  Large public parks will become obsolete and be replaced instead by smaller neighborhood play areas "in order to get the children off the streets, to avoid needless traffic accidents and death."

The plan would require the unselfish co-operation of property owners.

"Generous property owners are afforded by the comprehensive plan an opportunity to aid the town in its realization, through gifts of parcels incorporated in the park scheme. Various parks in Hartford have been donated to the city...Today, they constitute not only worthy memorials to these public spirited citizens in that their names are handed down to posterity but that funds that might otherwise have gone into the building of a mausoleum afford countless thousands of children and opportunity to enjoy necessary outdoor recreation.

"To realize this park program is probably more than the treasury of the town will admit of for a good many years to come.  To make this realization certain, the town requires the co-operation of the property owners themselves."

The map included with the formal document showed Griswoldville Park as an uneven five-sided area with its two western borders adjacent to a straight-line extension of Wolcott Hill Road and a proposed "Goodwin Parkway" that would run from Campfield Avenue in Hartford "in the valley south of Goodwin Park" south to Prospect Street then southeasterly to connect with another proposed parkway along Goff Brook.

"Wethersfield is exceedingly fortunate in the fact that the inland parks need not be developed without water features...Goff Brook as already been dammed, so there are ponds at various points along its course.  Reservoir Park, Griswoldville Park and Rocky Hill Park all utilize various ponds made by damming Goff Brook."

The Goodwin Parkway however was never built. Instead, as described in its minutes, on July 10, 1933 The Bureau of Public Works of the Metropolitan [Water] District "respectfully" recommended "the layout of a street or highway to be known as Folly Brook Boulevard extending from Camp Field Avenue in Hartford to Griswold Road in Wethersfield."

The idea for a park in the Griswoldville area however remained alive.