A Black Column from the Earth to the Clouds

"The question as to what constitutes a tornado presents itself at the outset.  Many types of storms have been so designated by untrained observers which technically did not qualify.  The exact nature of a tornado-type storm, of course, was a subject of acrimonious debate throughout our entire period and later.  The determination as to whether a local storm was a tornado or not was greatly complicated by loose terminology employed by both scientists and the public.  The words 'whirlwind' and 'tempest' were employed in the English translations of the Bible, and these terms were used by early settlers to describe storms of local extent possessing a circulatory system of winds.  The term 'hurricane' was also frequently applied to land storms, and employed by meteorologist as late as the 1830's...It was not until the 1840's that the Spanish 'tornado' was narrowed in meaning to designate a local rotary storm." (XX)

Something meteorologically malevolent happened in Wethersfield on August 15, 1787.  And, in spite of it classification at that time as a "tremendous hurricane", weather historian David M. Ludlum sees it as a tornado.

"A series of tornadoes on a mid-August day in 1787 - commencing in central Connecticut, touching down in Rhode Island and Massachusetts, and ending in southern New Hampshire - represented the most extensive tornado outbreak in early New England history. 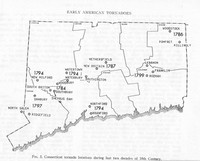 "The storm seemed to resemble a tornado, but a very large one...Huge trees were twisted and destroyed along with crops" (XXI)

"The first occurrence took place between one and two o'clock on 15 August 1787 at New Britain, south-southwest of Hartford.  Next in line was Wethersfield immediately to the northeast.  A good eyewitness account of the event and a follow-up survey the next day was composed by J. Lewis of Wethersfield.  This was published in the Connecticut Courant at Hartford 'An Account of the late Hurricane at Wethersfield'." (XXIII)


The storm covered an area about 30 miles wide and 145 miles in length.  Because the funnels did not strike any large villages of groups of buildings damage was minimal and few lives were lost.

John Lewis was the pastor of Stepney Parish. 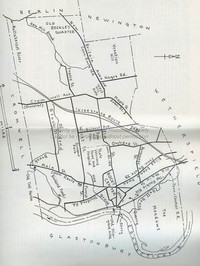 "WHEN any extraordinary event attended with dreadful effects occurs, the curiosity of the public is excited, and it is proper it should be gratified; such an event occurred on Wednesday the 15th instant in the tremendous hurricane which passed near the north line of the parish of Stepney in this town.

"I was myself an eye witness of but a small part of the hurricane, and that near the time of its disappearance, and at a distance of almost two miles from the line of passage - I was, however, as soon as possible, on the ground and spent most of the next day, in traversing for some miles the scene of defoliation, making observations, and collecting the best possible information from those who were near or saved from its fury.  "  (XXIII)

Among the information collected and reported by Lewis was:

"...the wind was very much from the southward...at about twelve at noon an unusually black cloud appeared to be ranged from the western to somewhat past the northern point...At about three o'clock P.M. the hurricane was seen to approach near the western boundary of Stepney parish....but now from a rising ground it displayed itself in its full extent, replete with undescribale horror - A black column from the earth to the cloud, of about thirty rods diameter, so thick the eye could not pervade it, whirled with amazing velocity and a most tremendous roar...and was charged with broken pieces offences, and huge limbs of trees, which were continually crashing against each other in the air or tumbling to the ground.

"...it arrived at the house of Mr. Wait Robbins, who was himself absent as were two of his children..." (XXIV)

On the morning of the storm Mr. Robbins had left on horseback on a trip to Vermont.  He became uneasy, stopped for the night short of his destination, and returned the next day.  A messenger who had been sent to recall him home met him ten miles above Hartford.

"...his wife, four children, an infant of five months old, a labourer and a female negro servant, made up what of the family were at home. [They] attempted their escape from the buildings...the labourer, past her a few paces, and was overtaken by the hurricane, thrown over a fence into a garden and escaped with little hurt. - Near the place where the labourer past them, amidst the rubbish of the demolished buildings - the oldest, about ten years of age, lifeless - the other it is feared mortally wounded - Mrs. Robbins, with her babe still in her arms, is supposed to be hurled by the violence of the hurricane more than twenty yards back towards the house, for there she was found dead, with her babe lying a few paces distant, wounded but not badly - the servant with the two children fled a different course; they were all wounded but likely to recover." (XXV)

As to property destruction on the Robbins' farm:

"The house unroofed - the garret floor gone - chimney thrown down below the garret and what is left standing of the house - cyder mill house - a building for pressing hay and a large barn stored with green hay and flax, all leveled with the ground...-every tree either torn up by the roots, or twisted off near the ground, one only excepted which is strip of its branches." (XXVI)

The storm now proceeded through the meadows and across the river to Glastonbury where among other damage it "unroofed a large brick house of Mr. Theodore Hale" and "demolished a barn of Mr. Wm Mosely." (XXVII)

The storm took with it several objects from the town of Wethersfield including "two of Mrs. Robbins gowns."  Stiles and Adams "The History of Ancient Wethersfield" reports, "A dress of Mrs. Robbins was carried to Glastonbury and lodged in a barn on the place where a sister of hers was then living." (XXVIII)

The destroyed house was at the north end of Stepney Parish, in what is now Wethersfield.  Mr. Robbins built a new house on the site.  In 1890 (the publication date of "The History of Ancient Wethersfield") it was "occupied by Wm. Griswold, a descendent in the female line, and stand just south of the mattress factory, near the north end of Brook Street." (XXIX)

It is difficult, if not impossible, to look back over two hundred years and determine with certainty what it was that struck Wethersfield on that mid-August day in 1787.  Even then it was uncertain.

The exact causes of specific tornadoes are still today a scientifically uncertain area.  It is speculated that the 2009 Wethersfield tornado was caused by a "super cell" - a thunderstorm containing a deep, continuously rotating updraft.