It's an Ugly Scene Out There

Unlike the probable tornado of 1787 (please see chapter 2), the storm that struck Wethersfield on June 26, 2009 was both officially proclaimed and well documented.

...EF 1 TORNADO CONFIRMED IN WETHERSFIELD ON FRIDAY JUNE 26...
A REPRESENTATIVE FROM THE NATIONAL WEATHER SERVICE OFFICE IN TAUNTON MASSACHUSETTS CONDUCTED A STORM SURVEY IN FARMINGTON AND WETHERSFIELD CONNECTICUT TODAY DUE TO THE MAJOR DAMAGE WHICH OCCURRED IN THESE TOWNS ON FRIDAY. IN ADDITION...A SURVEY TEAM FROM THE NATIONAL WEATHER SERVICE FORECAST OFFICE IN UPTON NEW YORK CONDUCTED AN AERIAL SURVEY OF THE SAME AREA. THESE SURVEYS CONCLUDED THAT...WHILE MOST OF THE DAMAGE THAT OCCURRED ACROSS SOUTHERN HARTFORD COUNTY WAS DUE TO STRAIGHT LINE WINDS...A NARROW TORNADO OCCURRED IN WETHERSFIELD CONNECTICUT. THIS TORNADO WAS RATED AN EF 1 ON THE ENHANCED FUJITA SCALE...INDICATING WIND SPEEDS BETWEEN 85 AND 100 MPH.

An article in Wethersfield Life described the path and summarized the damage. 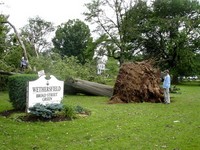 "Wethersfield's first tornado in nearly 300 years (since 1729) raced through town at 90 miles an hour in three minutes uprooting hundreds of really big and dangerous trees, damaging 70 buildings, six of them totally destroyed, leaving a path of destruction from Nott Street through Timber Village, devastating Church Street, rampaging along Wolcott Hill, the Silas Deane Highway and through the Broad Street Green. Seven thousand eight hundred households lost power, some overnight, some for four days.

"Hail the size of quarters and of golf balls banged on the rooftops and cars; rain came down in blinding sheets." (XCI)

It happened at about 4:45 p.m. and lasted only three or four minutes.  No one was injured and there was basically no crime from the time of the storm through the immediately following weekend.  "[Police Chief James Cetran reported] 'Two arrests were made during this period of time, one DWI, and one harassment-type arrest, neither storm related. We did get a lot of domestic-related calls for service because people were without power and had nothing better to do than to argue. However, no violence was reported therefore no arrests were made." (XCII) 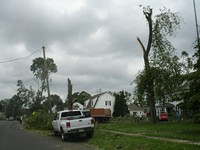 The Pitkin Community Center was opened up as an emergency shelter.  A few residents stayed there overnight and many more dropped in to take showers, charge cell phones or amuse their children with DVDs.

Claire O'Toole Cashman was leaving the D'Esopo funeral home at the height of the storm; "As I was turning from Nott, coming out of D'Esopo's I took the right onto Ridge Road, like a transition from a perfectly okay place to this madhouse. Trees were falling in front of me and in back of me. I just missed getting killed. I was saying oh my God. If I die on the way home from a funeral, that would make a funny obituary. (XCIII)

Dana Spicer, owner of the Heart of the Country gift shop, lost her front porch.

"She had to take a day off, planning to work in her garden, but the weather didn't look good. 'I was very close to the front door when this 75 to 100-foot pine tree was sheered off and came down and scared me to death. A few branches on another tree came down on our side porch. It happened so quickly I was not prepared. The hail and the rain were so loud that it obscured the sound of the tornado. There was this gentle rain and distant thunder and all of a sudden torrential rain and the hail. We have interior damage and there are holes in the roof but we are able to live here. The porch collapse broke a couple of our storm windows. (XCIV)

Like most of our town's residents, Marsha and I were immersed in the storm without realizing what we were in the middle of.

She was in Glastonbury when the tornado hit, and drove home in the after-effects.  The Putnam Bridge across the Connecticut River (normally two lanes each way) had its available space cut in half by falling trees.  She was impressed that, without police guidance or traffic signals (no electricity), the drivers regulated themselves in order to kept the traffic flowing - albeit quite slowly.  Her normally five-minute trip home took just over thirty minutes.

I was at home when the rain poured down, the wind blew, the power went out, and the three-way intersection in front of our house flooded due to the storm sewers becoming clogged by storm strewn branches and leaves.  I went outside to clean out the catch basins and was surprised by the unusually high volume of traffic trying to pass through our side street.

As I stood ankle-deep and hands-plunged in the rapidly rising water, I wondered -- did I really want to leave this life as a result of being welded to a municipal catch basin by an errant bolt of lightning?  On the other hand it would make a pretty entertaining story for someone else to tell.  But, since I did not get fused in place and the passageway did get cleared, I guess I and my other neighbors who came out did the right thing.

After the storm, all around town, people took advantage of the comfortable temperatures and lack of cable television to walk around their neighborhoods.  Trees were uprooted and rested on houses or blocked roads.  Most of us out there looked totally surprised.

"Farmer Chris Anderson said: 'We did have damage but there are probably 8 to 10 acres where we might get 50 percent of.

"'We are hoping that the corn that just come up will also be okay. I suppose you could say we are very lucky. A lot of the small vegetables got damaged, string beans, peas. It finished the strawberries for a year. But we have Anderson corn on the stand right now.'

"But there has been destruction. 'In some of the fields, big trees have fallen that we had to remove. In the meadows there are trees that came down, as you can imagine.'

And on Broad Street so many fallen trees, Mr. Anderson said, 'Every time I go by the Green it blows my mind.' "(XCV) 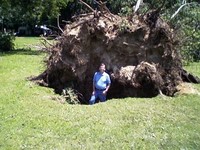 Probably the most visible and most troubling impact of the tornado was seen at the Wethersfield Town Green on Broad Street in Old Wethersfield.

"[Former Town Tree Warden] John Lepper didn't need the National Weather Service to tell him a tornado had ripped up trees that could have been standing since Colonial times as he toured the old town green Saturday morning.

"'I'm still just totally shocked at what I saw," Lepper, the town's former tree warden, said. "To have so much devastation in one area is almost unimaginable.'

"Lepper said he believes the green in Old Wethersfield was right in the tornado's path. Among the trees destroyed there was a copper beech that had been damaged in previous storms 'but was doing OK until now.'

"But the tallest and fourth-tallest pin oaks in the state, both on the green, survived virtually unscathed, Lepper said.

"'The trees on the green are very well maintained. I think it was the right combination of the ground being soft because it was saturated with water and the strong winds,' Lepper said.

"The green and the surrounding area are Wethersfield's heart, giving the town much of its historic identity. It's home to concerts and community gatherings, a place for dog-walkers and picnickers, and it's where prom-goers pose for pre-party pictures. (XCVI)

With the assistance of the Physical Services Departments of surrounding towns, workers from out of state electric companies, various arborists and a large number of in-town volunteers order was restored to the town.   ("Fifty calls were received, several of which were from groups or teams of people willing to be assigned wherever we needed them." (XCVIII)) 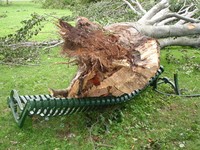 Some things still do not look right, and to some of us probably never will - the lower horizon at the intersection of Church Street and Wolcott Hill Road, our favorite trees gone from the Town Green - but "The storm was over; the sun came out; the work went on." (XCVIX)

On the Saturday and Sunday following the Friday, June 26th EF1 tornado, I took about 500 pictures (Digital SLR) of the aftermath. Perhaps the WHSoc might be interested in some of these for your archives.