I've Decided Not To Move To Venice

As mentioned earlier sometimes a short piece of personal correspondence can tell you more history than even the longest newspaper article or academic treatise. The following note, from Clifford Lawrence of Wethersfield to his sister Helen Van der Veer in New Jersey, was written on "March something or other [1936]"

"Take good care of Anne and stop worrying about us.

"Old Noah!  The Ark and Mt. Ararat have eventually emerged from the flood but what a job cleaning up.  Things look worse now than they did when your telegram arrived Sunday evening by motorboat.

"The green had about six feet of water over it and I've decided not to move to Venice." (L)

On the morning of Sunday March 22, 1936, according to the U.S. Weather Bureau, the water level was thirty-seven feet and six inches - the worst flood in town history. 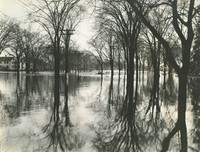 Merrick Carpenter verified that number "by setting up a transit at the end of North Main Street.  The last house had a grandfather clock on the stairway and we took the water level from there and translated it on the warehouse." (LI)  And Edward Willard, a Broad Street resident, took a canoe with some family members down Elm Street where they "drove a spike into the telephone pole at water level, just level with the street light." (LII)

In 1936 the town's population was 8,300 having nearly doubled in the five previous years.  The flood covered seventy-five percent of the village with water.  More than 30 buildings were pushed off their foundations, and over 250 houses were damaged by the mixture of floodwaters, river mud, and oil from riverfront storage tanks (LIII).

"On March 12, 1936, rain began falling across Connecticut, as well as all of New England, and poured down for the next nine days. Fourteen inches of rain, coupled with melting snows from the area's mountains, unleashed on Connecticut the greatest floods in its history to that date. The Connecticut and Farmington Rivers and all of their tributaries became raging torrents. Water and ice flows tore out bridges, highways, roads, and railways.

"The dam at New Hartford burst, and homes and buildings were washed away or destroyed. The waters at Hartford rose to a level of 8.6 feet higher than any previous flood level on record, flooding most of the downtown commercial area. Fourteen thousand people were left homeless, several were dead or missing, and epidemic disease threatened the population.

"The National Guard was called to action as the ravaging floods paralyzed business, traffic, communication, and home life, as the cities and towns along the rivers became the principal centers of destruction. While loss of life was small, damages exceeded $100 million, making it the costliest New England weather event to that time." (LIV)

Martial Law was declared in Wethersfield and residents or businesspeople in the flood zone were issued entry passes "Good only in daylight hours and to the neighborhood specified."  (LV)

The southern end of town and the Wethersfield green became lakes.  "East from Harris Hill the waters covered every inch of land from the river bank west, beyond and including the Silas Deane highway...not even were the tops of the white posts, which mark the highway discernible.  The Southern New England Ice Plant was as island of shingles.

"[The Wethersfield Green] became a murky lake whose waters pushed out into the Garden Street area." (LVI)  An entire section of the two hundred homes built by A.G. Hubbard over the previous ten years were flooded.

But one of our village landmarks was unscathed - in spite of its location on the Wethersfield Town Green. The "Old Elm" tree, with a trunk circumference of twenty-eight feet, had been recognized in 1924 as the largest of its species in the United States. "Standing majestically looking on the disaster being caused by the angry river the ancient Wethersfield Elm, symbol of the town's history, remained untouched by the waters which flowed by it within a few feet." (LVII)  The tree, however, would not fare as well in the hurricane of 1938.

All the homes on Marsh Street, Middletown Avenue and Elm Street had to be vacated.  The waters on Elm Street reached above the second story windows, washed away cars, trucks, farm implements and barns, and trapped farmers as well as their livestock.  "The home of Francis Gilde on River Road, the first house affected each year by the flood, was lost to sight and many believe it washed away." (LVIII) 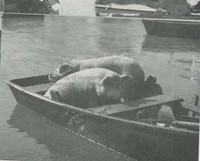 But, to a town with a strong sense of history such as Wethersfield, not all of the flood damage was bad news - and some was even architecturally enlightening.

"The Sergeant John Latimer Homestead (private), 580 main St., a steep, narrow, gambrel-roofed house, which was later enlarged into a rather awkward salt-box, has been in the Latimer family since its erection in 1690.  Like those around it, this house suffered greatly in the flood of 1936, which revealed that the outer walls were built of rough vertical planking, two inches thick, but finished with a feather-edge on the inside, a unique piece of 17th-century workmanship" (LVIX)

On Friday March 20 Martial Law was rescinded and the National Guard was recalled.  Only one break-in had occurred - the attempted theft of gasoline by two New Britain men from the station belonging to Frank Brigeman.

The immediate impact of the 1936 flood were short-lived, but there were significant long-term effects that extended well beyond the immediate Wethersfield area.  "WPA programs worked to build dikes that separated the City of Hartford from the Connecticut River (Cunningham 124).... Also, the flood of 1936 inundated the District, prompting many people to move away from the Cove, but unlike Hartford, Wethersfield farmers chose not to dike our meadows." (LX)

While our town agriculturalists opted not to reshape the landscape in order to prevent future deluges, the federal government moved in the opposite direction.  "There was no such thing as a federal flood-control dam before spring floods swept the Northeast in 1936. The devastation, including $66 million in property damage and 11 dead, turned the political tide in favor of granting the federal government the right to seize land in one state to build a dam intended to prevent flooding in another state." (LXI)

The resulting "Flood Control Act" called for over thirty dams to be constructed in northern New England to prevent flood damage in Connecticut and Massachusetts.  As the flood of 1936 became a more distant memory that number shrank to twelve and then nine.  And an agreement for compensation was reached among the New England states.

"As the land in Weathersfield, Vt., was seized in the late 1950s, a payment in lieu of taxes was set for the 1,219 acres occupied by the reservoir. The Connecticut River Valley Flood Control Commission determined the payment would be $10,092 a year. Fifty percent of the payment would come from Connecticut, 40 percent from Massachusetts, and 10 percent from Vermont. The amount was apportioned by each state's flood-control benefit.

"The Village of Perkinsville has an additional property tax, on top of the Weathersfield town tax. To compensate the village, the tax loss from the 40 houses, including six farms, seized for the dam was determined to be $10.

"Some 40 homes and farms are just a dim memory now in Lower Perkinsville Village [Vermont]. For the sacrifice, Connecticut says thank you each year with a $10 check."  (LXII)

One interesting side story to the flood was the role of prisoners housed in the State Correction Facility located, at the time, in Wethersfield.  Inmates from the state prison ("no shackles, just the watchful eye of a shotgun...everyone behaved") were used to help raise the roadbed on Jordan Lane in order to allow traffic carrying supplies to continue flowing.  Convicts worked in the pouring rain with W.P.A. workers, American Legionnaires, and town highway department employees to build up the road and prevent flooding.

I also found the following perhaps (sub)urban myth on the internet.

"While at the historic Cove Warehouse, we learned that after the flood of 1936, the prisoners used brute strength to move the warehouse back away from the Connecticut River. I'm sure there are hundreds of interesting stories about the prison and its former occupants. But all that stands today is a very modest in-ground marker denoting the existence of the prison cemetery.

I had never heard this story nor did I come across it in any newspaper accounts - which kind of surprised me since it is a good story.  I emailed my friend John Oblak - avid amateur historian, historical society member, and a docent at the Cove Warehouse - to ask what he knew about the story.  And, as frequently happens when you ask someone a question on a subject they are enthusiastic about, I learned a lot more than I expected.

"It is true that the 1936 Flood lifted the Cove Warehouse off its foundation and floated it away. Obviously, it was moved back; but I do not know how that was done.

"That prisoners did it is quite plausible. The actual warehouses were not on raised stone foundations, as is now the case. (It's possible that the original warehouses stood on low-rise stone foundations.) A warehouse would be located modestly above water level (at pier level) for ease of loading and unloading vessels. When a flood came, a merchant would move his goods to the warehouse second floor; open the doors of the lower floor; and let the floodwaters slosh through. If a very high flood was expected, the goods might be moved to an even safer location on Main Street. Main Street then was called High Street because it is located above flood level.

"Anyway, it would not do for a wooden structure to be flooded every spring, or more, if the intent was to preserve it as a historic building. In the early 1930's, the inmates at the state prison were employed to construct the current high stone foundation upon which the Cove Warehouse was then raised. Since prisoners did this work, it is quite likely that only a couple years later the inmates would again be called upon to move the flood-displaced warehouse back to its original location."

As I said at the beginning of this chapter, sometimes a short piece of personal correspondence can tell you more history than even the longest newspaper article or academic treatise.