Paris Cinemas 2, on the corner of Silas Deane Highway and Welles Road advertised a 99 cents admission special until 5:30 p.m. Sunday for the movies "Oh God" and "Looking for Mister Goodbar".     (LXXXVIII)

"Long Island Sound bucked and surged against the shoreline. Hundreds of cars were stranded along the state's highways, and thousands of people sought refuge in emergency shelters.

"When the skies finally cleared 30 hours later, parts of Connecticut were cloaked in nearly 2 feet of snow.

"The Blizzard of '78 wasn't the biggest snowstorm to strike southern New England. That distinction belongs to a ferocious, late-winter storm that brought as much as 50 inches of snow to the state in 1888.

"But the harrowing nor'easter that blew into the region 20 years ago Friday remains etched in the memories of many New Englanders.

"Statistics tell part of the story: More than $25 million in damage, hundreds evacuated from coastal areas, and four men dead of heart attacks while shoveling snow.

"For some, the storm was nothing but a hassle. It left mountains of snow to shovel and turned even the simplest of tasks, such as a jaunt to the corner store, into an adventure. (Remember, this was the late 1970s, when sports utility vehicles were rare and four-wheel-drive was an anomaly.)

"Many people grew stir-crazy after spending three days indoors. But for children, and adults who share a child's sense of wonder, it was an enchanted time. Instead of sitting in school, children spent the days sledding, sipping hot chocolate and climbing atop enormous snowdrifts."(LXXXIX)

There was however no significant damage as a result of the storm because of the fluffy, light nature of the snow - a meteorological result of the temperature dropping into the twenties during the heaviest snowfall.  The major impact of the storm was on travel.

Unlike former Governor Thomas Meskill, whose career in elective office was at least partially ended by his out-of-state absence during the ice storm of 1973 (Please see chapter 8), Governor Ella Grasso, was right in the middle of the action.

"Gov. Grasso's car got stuck as she tried to make her way from the governor's mansion in Hartford's West End to the state's storm command center in the State Armory. She walked several blocks through the snow.

"Once Grasso arrived at the command center, there was no question who was in charge. 'She was a fountain of strength,' said James F. Shugrue, who was state Department of Transportation commissioner at the time.

"Grasso quickly seized on an offhand comment made by one of her staff workers. 'Someone said, 'Wouldn't it be nice if the roads were closed?' And the governor made her decision before the 11 o'clock news,' Shugrue said. Grasso's ruling meant that DOT crews could get out and clear the roads without having to worry about traffic snarls." (XC)

The governor shut down the state for three days and President Carter declared the state, along with Massachusetts and Rhode Island, federal disaster areas.  A contingent of 547 soldiers was sent from Fort Hood, Texas to help with the cleanup. Because of her actions this weather event became known popularly as "Ella's Storm". 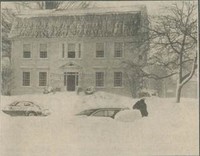 Marsha, Bram (our son) and I had moved to Brimfield Road in Wethersfield in the spring of 1977.  Marsha was a stay-at-home mom and I worked at the Travelers in downtown Hartford.  I commuted to and from my job on the "T2 to Rose Hill" bus that traversed Wolcott Hill Road/Franklin Avenue to Main Street in Hartford two or three times an hour.

Those of us at work could see the heavy accumulation of snow.  And as the afternoon wore on several commuters from our capitol city's more outer suburbs became convinced that their trip home was not going to happen and made arrangements to stay in downtown hotels.

I think we were allowed to leave work early - two or three in the afternoon - because my recollections of the trip home begin in daylight and end in the dark.  I called Marsha from my office phone (no cells in 1978) and told her that I was leaving.  I had not worn any boots.

The bus schedule was totally obliterated by the un-plowed conditions of the local roads and the untimely outflow of mass transit passengers.  I waited at least an hour - probably longer.  Then, failing to see any semblance of my normal bus and having a not-totally-full "T1 to Jordan Lane" motor coach in front of me, I opted to ride to our town's northern border and hoof it home from there.

Other commuters were not as successful.  Routes I-84, I-91 and I-95 were converted into parking lots as stuck motorist hunkered down in their cars.  Television station WVIT opened its Corbin's Corner studios on Route 84 as a shelter for people stranded on that highway to come in and get warm.      Snow accumulations were from one to three feet - but the real problem was the fifty-plus mile-per-hour winds that created roof-reaching, car-burying snowdrifts.

The next day we shoveled out - something that took the three of us at least the morning. (This was the last snowstorm we would weather without mechanical assistance.  Shortly thereafter we went halves with a neighbor on a Toro snowblower.  Marsha and I still use it.)  Located within easy walking distance of Bliss Market and Leo's Pizza we had no need to venture onto the plowed but still snowy roads. 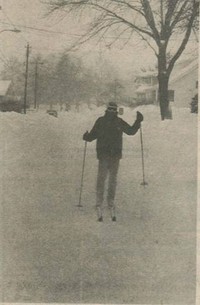 The weather became calm and sunny.  Now matter how old you get you never outgrow the joy of an unexpected "snow day".  Three of them were even better.