Wethersfield's Pride and Joy is Gone

According to Dr. Mel Goldstein, television weatherman and author,

"Most of Connecticut was on the dangerous right-hand sector where the storm's circulation combines with the storm's northward motion to enhance the force of the wind.  The storm was moving at nearly 60 miles per hour, so that flow from the south combined with the strong south wind...to deliver winds well in excess of 100 miles per hour." (LXV)

All of this was exacerbated by the surprise with which it struck.  At that time it was generally believed that storms of this magnitude just DID NOT happen in New England, and as a result meteorological clues were ignored.  This was truly "the storm of the century".

"Deluged by torrential rain squalls for the past six days, Wethersfield was literally torn asunder Wednesday afternoon by a wind and rain storm of hurricane proportions." (LXVII)

As reported in the headline, two persons were injured.  Samuel Pollock of Hartford was hospitalized when a large tree fell on the fruit truck that he was driving near Hart's Tourist Camp on the Berlin Turnpike.  Daniel Bond of Nott Street hurt his left arm when he fell from a Connecticut Company repair truck.  Five days later, on September 26, a tree that was being cut down by workmen in front of Legion Hall struck Joseph Nogas, also of Nott Street.

Hundreds of trees were uprooted or broken and "virtually every street was rapidly transformed into a mess of tangled foliage, electric and telephone wires, and fallen poles." (LXVIII)

A set of five electric light and telephone poles on Wolcott Hill Road between Nott Street and Jordan Lane were brought to the ground, halting traffic.  Some telephone service was restored by the evening of the storm but "electric service was badly crippled while workers labored to repair lines and furnish power from the new substation of the Hartford Electric Light Company on Nott Street." (LXVIX)

Trolley service was almost completely shut down due to trees that had fallen onto the cable lines.  Roofs were ripped of several houses including those of Joseph on Hart Street, Arthur Jaquith of Garden Street and John E. Rust on Marsh Street.

"Wethersfield Cove became a raging sea under impetus of the wind which at times lifted quantities of water from the surface and swept it in dense white mist across the cove." (LXX)

Legion Hall, which had a joint installation ceremony of the Russell K. Bourne Post and Auxiliary scheduled for that evening instead became the town's emergency relief headquarters

Even with all of the above damage, the most serious casualty however may have been a single tree that had lived in the town for over three hundred years. 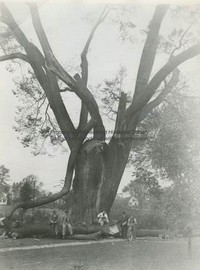 "In my youth, the Green was populated not only with strollers and game-players and children and dogs, but with the ancient elms that were the pride of Connecticut, one of them being the largest in America. Visitors would go out of their way to drive by and take pictures of it, and of Lady's house. The Great Elm - what a tree was that. It grew halfway between our house and hers, one hundred feet high, the trunk almost forty feet in circumference, and must have been something short of two centuries old when it died of the Dutch blight. But while it lived, how grand it was." (LXXI)

The story of The Great Elm began in the middle of the Eighteenth century.

"John Smith was a great uncle of mine.  He went to his pasture 3 miles south west of where the tree stands now after cattle and got off from his horse to get a stick to drive the cattle and pulled this tree up.  It was in a wet place, and brought it home horseback and set it out.  The Smiths were among the first settlers of Wethersfield and this property has always been in the family." (LXXII)

The pasture was at what is now the border of Rocky Hill and Wethersfield - off Maple Street - known at that time as "Hangdog Hill".  John Smith was 12 years old when the tree was planted in 1745.

By 1924 it was considered the largest elm in the United States with a trunk that measured 28 feet around.  "On the morning after the hurricane of 1938, only four of its six magnificent branches, one of them fortunately the largest, seventeen feet in girth, were left standing." (LXXIII)

The Great Elm had been materially damaged.  It survived another fifteen years in this weakened condition.  Then, after a three-day struggle to remove the thirty-five ton stump, it was taken down on May 29, 1953 by Tree Surgeon William George and workers of the town Park Department - a victim of Dutch Elm disease, and the hurricane of 1938.