By Wethersfield Historical Society on January 26, 2011 11:45 AM
My name is Eliza
I live by the river
It's beginning to feel
Like the water will never
Surrender the field (I)
Wethersfield Connecticut sits on the west side of the Connecticut River.  And like all river towns - the waters giveth maritime trade and fertile farming land.  And sometimes the waters taketh away.

The first flood occurred in March of 1638 - four years after the town's birth.  The storm that caused it began on March 5 and went on until the 18th of that month.  Four days later the water crested.

Governor Winthrop of Massachusetts wrote  "There came such a rain withal, as raised the waters at Connecticut some twenty feet above their meadows, etc." (II)

At the time many of the townspeople were likely still living in dugout homes and just beginning to learn how to farm these flooded meadows in order to raise their crops.  The waters stayed low for the next forty-five years.

The flood of 1683 was actually two inundations that occurred slightly less than one month apart.

The Reverend Cotton Mather described it as follows. 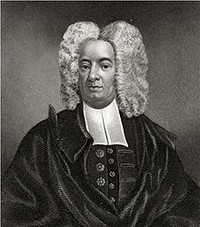 "Some remarkable land floods have likewise happened in New England. Nor is that which came to pass this present year to be here wholly passed over in silence. In the spring time, the great river at Connecticut useth to overflow, but this year it did so after midsummer, and that twice; for, July 20, 1683, a considerable flood unexpectedly arose, which proved detrimental to many in that colony. But on August 13, a second and more dreadful flood came; the waters
were then observed to rise twenty-six feet above their usual boundaries; the grass in the meadows, also the English grain, was carried away before it; the Indian corn by the long continuance of the waters is spoiled so that the four river towns, viz: Windsor, Hartford, Weathersfield, Middle-Town, are extream [sic] sufferers. They write from thence, that some who had hundreds of bushels of corn in the morning, at night had not one peck for their families to live upon. (III)

And why did all of this happen?

There is an awful intimation of Divine displeasure remarkable in this matter, inasmuch as August 8, a day of public humiliation, with fasting and prayer was attended in that colony, partly on the account of God's hand against them in the former flood, the next week after which the hand of God was stretched out over them again in the same way, after a more terrible manner than at first." (IV)

Mather also noted that a hurricane took place in Virginia at the same time as the flooding.

Every new flood forged a straighter course for the Connecticut River.  In 1692the river shifted to  create the Wethersfield Cove in the process destroying at least five of the warehouses that had been located near the waters. The building now called the "Cove Warehouse" is maintained as a museum by the Wethersfield Historical Society and is representative of a sea merchant's storage building of the late 17th century.  Its likeness appears on the town seal.

"'Every spring since, you can see the river trying to put itself back in its old channel,' said Eleanor Wolfe. 'It doesn't like the curve.'" (V)

Over time the serpentine path of the moving waters evolved into a nearly straight channel John Warber Barber published a map in "Connecticut Historical Collections" (1838) that showed the old and new routes of the river. 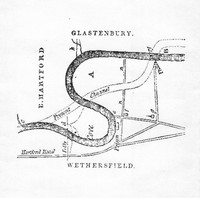 The tract A contains a number of hundred acres of good land, over which the river has gradually passed to its present course, from the old channel seen in the diagram, which is now obliterated.  The town of Wethersfield maintaining its old bounds, it will be perceived that tract A, although on the east side of the river, is within the bounds of Wethersfield...and it will be perceived that tract B is within the limits of Glastonbury." (VI)

Even in its early stages the reconfiguration of the waterway effected, among other things, the distribution of the estate of Samuel Welles.  He died without a will and thus his assets were subject to the legal division of one third to his widow Hannah (the "dower" share), and shares to his children (Samuell, Thomas, Sarah, Mary, Ann and Elizabeth).  The distribution of the estate, originally inventoried in 1675 at around 110 lbs, was delayed by the shift of the river in the late 17th century causing land to be lost in Hoccanum.  This reduced Elizabeth's share to about 42 lbs.

Spring floods are still pretty much an annual occurrence in Wethersfield - sometimes, as in 1936, causing considerable damage and hardship.  (Please see Chapter 6).

"A year hardly passes without some flooding in Connecticut.  Even though many flood-control projects have been put into operation over the years, water has a way of getting around these, especially when it falls in excessive quantities.  There is really no specific season.  River flooding occurs during colder months with melting snow and northeaster, but hurricanes add their impact during the late summer and fall.  Then, the severe thunderstorm season can bring its squalls and flash flooding during the summer.  Huge variability occurs from year to year in the intensity of the flooding.  Some years pass relatively quietly, but other years are unforgettable." (VII)

Where was Thomas Wickham 1624-1688 and Sarah Goodrich buried? I am a direct descendant

I wonder if a flood washed some tombstones away during the floods because Thomas Wickham 1624-1688 who settled here in Wetherfield and died here does not seem to have a grave. I found Thomas Cornet Wickham my Great/Great Uncle but everyone else seems to be missing.

James,
Thomas Wickham's warehouse was probably either damaged in the periodic flooding, succumbed to wear due to age and industry or fell into disuse. It is not currently possible to tell you which is most likely as we have only one warehouse that still remains, the one that sits on the Wethersfield Cove and is operated by Wethersfield Historical Society as a museum seasonally interpreting the maritime history. There were six warehouses (one we are unsure if it was built) that were operated by maritime families and greatly impacted the prosperity of early Wethersfield, but with the river altering its path the maritime trade relocated to Stepney Parish (today's Rocky Hill) and therefore the Warehouses were no longer necessary in Wethersfield. As to your other questions concerning the Wickham early settlers and burials, there is just one cemetery early enough, the Ancient Burying ground located (now) behind the First Church on Christ on Marsh Street. There are few surviving burial markers from the 17th century as it was not customary to ostentatiously mark burial plots, if plots were marked they may have been done simply and weather erosion has taken its toll. If you are looking to do further research on your ancestors please visit the Old Academy Research and Genealogical Library where we would be happy to connect you with your roots!
Thank you for your interest,
Wethersfield Historical Society