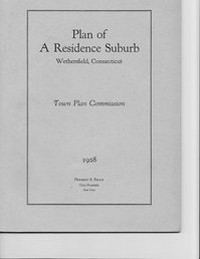 Because of the lack of more definite information on Brimfield Gardens or the Isaacsons, Melissa suggested that I look at “Plan of A Residence Suburb Wethersfield Connecticut prepared for the Town Plan Commission in 1928 by Herbert S. Swan, City Planner” (of which the society has several copies) to see what else was happening in town at that time.

The document begins “But yesterday Wethersfield was a rural community; today it is semi-rural; tomorrow it promises to be one of Hartford’s densely built suburbs.”

Whoever they were, the Isaacson clan apparently shared the view of the 1928 Town Plan Commission as to the future direction of this small town immediately south of Hartford.

And the Brimfield Gardens template fit nicely into the Proposed town plan of 1928 with one exception — in some of the places where the Isaacsons envisioned houses the town saw a pressing need for some major north-south thoroughfares.

“If nothing is done to assure that the most heavily traveled through streets are permanently retained as express routes for the future, it will only be a question of time until all of these main traffic highways will become clogged with slow traffic. It is of utmost importance to retain these arterial traffic-ways as through express streets for fast traffic between distant points.

“To make such thoroughfares 100 feet wide and leave them as ordinary streets will not accomplish this end….

“…With a width of 200 feet, such a parkway could have sidewalks and planting strips on either side of the roadway, aggregating a width of 72 feet…

“Four of these parkways are recommended in the comprehensive plan for Wethersfield: Griswoldville Parkway, Middletown Parkway, New Haven Parkway and Goodwin Parkway

“… Goodwin Parkway extends from the southerly limits of Goodwin Park up either side of Beaver Brook to its source, as an informal parkway varying in width according to the contours of the ground as well as to the limitations imposed by private developments. At the source of Beaver Brook it proceeds as a formal parkway in a southerly directions to Griswold Street, which it crosses, and thence in a southeasterly direction down Goff Brook into Mill Street, across the railroad tracks to its intersection with the  Middletown Parkway.”

Brimfield Gardens, in one form or another, was coming to fruition; Wethersfield was transforming itself from semi-rural to suburban; and a plan, at least on paper, was in place.

“Now that it has prepared a town plan, the work of planning Wethersfield has but fairly commenced. The preparation of a plan, of course, merely inaugurates the planning program.” (1928 Town Plan)

Go to next chapter