Home » Articles From The Community » Helmets in the Fog

As any reader is tired of hearing, before television we had to read the newspapers for news. The radio was another source and there was Life magazine, which had wonderful, full pages of news pictures, but if you wanted life-like, action pictures you had to see the newsreels that preceded every movie. They were in black and white but dramatically done. There would be martial music building up to a thunderous pitch, and overlaying this the deep voice of the announcer:  “THE EARTH SHUDDERS FROM THE POUNDING OF SHELLS FROM U.S. SHIPS AS OUR GALLANT MARINES HEAD FOR THE BEACHES” or “THE LOOK ON THESE FACES TELL THE STORY AS OUR BOYS LIBERATE ANOTHER TOWN OUTSIDE OF PARIS -LOOK AT THE SMILES ON THOSE FACES AS THEY CHEER AND WAVE AMERICAN FLAGS!”

This was always followed by a segment promoting war bond sales. Then there was the ship being christened with a bottle of champagne as it slid into the water. Finally something on the home front: “OUR BOYS OVER THERE ARE NEVER FORGOTTEN AS THESE LADIES PACK EXTRA CLOTHES AND FOOD TO SEND OVERSEAS –  OUR TROOPS WILL NEVER FEEL FAR FROM HOME AS THE U.S.O. BEAUTIES ENTERTAIN OUR BOYS TWO MILES FROM THE FRONT LINES.” People across America were always doing something to help our servicemen. It really was a national and all involving exercise. 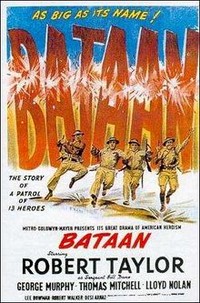 Not all the films were war movies, but many were and even romance stories usually included a serviceman in the plot. Girls were always falling in love with a boy who just found out he was going overseas in 24 hours and the tension was whether or not they would get together and find out they loved each other before his ship sailed. However many were about war and battles where our good guys always beat the bad guys. I don’t remember the titles of them except one that left such an impression on me that I can still picture the last scene. The picture was called “Bataan” and in a glamorized fashion followed a platoon that was being driven from that peninsula by the Japanese in the infamous “death march”. In the last scene only three or four men are left with their rifles and a machine gun to hold off the Japs while the rest of the platoon makes their escape. Of course you know the men left behind will all be killed and the movie ends with daylight just breaking on the fog covered bog of the jungle. There’s movement and we see the flashes of the tops of a couple of enemy helmets in the fog, the fight to the death is about to begin ends of movie. I guess it really impressed me as I can still see those helmets just moving through the fog and brush of the jungle floor.

Books about the war started to come out. I’m sure there were novels but the ones most of us read as we got a little older were true stories about the fighting. The first one I remember was “Guadalcanal Diary” about the retaking of that island from the Japanese. Everyone seemed to be reading it. Another book I remember acutely was “Long Were the Nights” about PT Boat patrols in the Pacific. PT Boats were the Ferraris of the navy, sleek and very fast, propelled by 2 or 3 huge Packard motors. If I couldn’t be a fighter pilot someday then my second choice was to captain a PT Boat. I was more than a little surprised to learn that these wondrous machines were made of plywood and therefore offered no protection for the men on board. A bullet striking the boat would go right through it and anyone who happened to be in the way. Also it turned out that rather than being a very exciting assignment being on one of these was really boring. The boats would spend hour after hour and night after night patrolling very slowly and quietly to check on enemy ship movements in the area often wearing out their engines from the slow, relentless motoring. Then, on rare occasions they would engage enemy ships and were always out gunned so all they could do was make a quick run at the ships fire a torpedo or two and try to get away without being destroyed. They very seldom did any damage but were able on occasion to disrupt enemy plans so in that regard were of some value. I guess you could think of their patrols as hours of stupefying boredom followed by seconds of stark terror. Hardly the devastating war machines I had pictured.

Another book I’ll never forget was “Tarawa” about the invasion of that island and its retaking. I guess I was old enough by then (this was towards the end of the war) to have some appreciation of what it meant when thousands of soldiers were killed in just a few days of battle. The stories of enemy troops holed up in caves, having to be burned out with flame throwers, made my hands turn cold. The most gripping thing I remember about the book was a picture of the beach after the invasion. It was just littered with bodies twisted this way and that with outstretched arms. Many were floating on the water and in my mind I seemed to see them pulsating up and down with the waves. That picture may have been my wake up call to the fact that this was not a movie picture war but something really bad that left dead soldiers floating in the tropical waters waiting forever to be saved.