The information herewith was taken from the book DESCENDANTS OF JOSIAH-2
WILLARD, Published in 1972 by THE WILLARD FAMILY ASSOCIATION OF
AMERICA, INC. and THE WILLARD NEWS.

The motto on the shield translates to “Patience Rejoices in Hardships”. 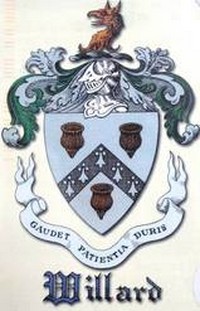 Major Simon Willard, progenitor of the New England Willard Family, was baptized April 7,  1605 in St. Margaret’s Church, which was built in Horsmonden, Kent, England in 1343. He married first, Mary Sharpe, who was baptized in the same church October 16, 1614. After Mary died in England, Simon came to the Massachusetts Bay Colony (Cambridge) in May of 1634, the same year Wethersfield was settled. Simon married second, Elizabeth, sister to Henry Dunster, first president of Harvard College, Cambridge. She died within a year and he married third, Mary Dunster, cousin to Elizabeth.

Simon and Mary removed with twelve other families to found the Town of Concord, Massachusetts in 1635. Their first son Josiah was born in Concord that same year, perhaps the first Caucasian birth in that Town. Also in the first group of settlers was the Reverend Peter Bulkeley. Peter’s son, Gershom Bulkeley, was born a year later and Gershom and Josiah grew up together in Concord.

Josiah Willard came to Hartford and married Hannah Hosmer in March of 1657, she was  18 and he was 22. Hannah was the daughter of Thomas and Frances (Bushnell) Hosmer who had migrated to Cambridge, Massachusetts in 1632 from Hawkhurst, Kent, England, a village near Horsmondon. The Hosmers then came to Hartford with Reverend Thomas Hooker in June of 1636.

In 1661 the young couple bought a three acre home lot on the west side of Broad Street in Wethersfield, from Samuel and Phoebe Martin, which today encompasses the properties from 35 to 65 Broad, extending west past Bell Lane (Main Street). This original deed is still in the Willard Family and was the first to be recorded in the Town of Wethersfield. One of the witnesses signing the deed was Josiah’s brother, Samuel Willard, who went on to become Minister of Old South Church in Boston, in which he baptized Benjamin Franklin while simultaneously Vice President of Harvard College. Thus Josiah and Hannah Willard were the first of that name to live in Town and all Wethersfield Willards down to the present are descended from that marriage.

Josiah Willard was one of the town’s earliest schoolmasters (1655), a surveyor and a farmer. He removed to West Farms and his descendant and namesake in the fifth generation was the first to call it Newington Parish. He probably died there in 1674. When Reverend Gershom Bulkeley was called to be Minister in Wethersfield, it is no surprise that First Church sent his childhood friend, Josiah Willard, to bring him here from Second Church in New London. 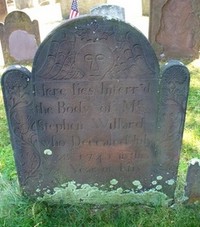 When Josiah moved to Newington Parish, a part of the Broad Street property stayed in the Willard Family for over three hundred years. Josiah’s-2 son Stephen-3 (1667-1742) lived there next. His is the oldest known Willard tombstone in the Wethersfield Cemetery. “Here lies interr’d / the body of Mr. / Stephen Willard / who deceased July / ye 28th 1741 / 74th Year of his / Age” He was a blacksmith and wealthy for his day, bequeathing his property to his nephew Ephraim-4 (1707-1766) Willard, son of his brother Simon-3. 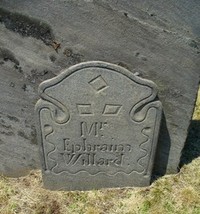 Rachel Margaret Bugella, Granddaughter to Buz and Peg Willard, is the 11th generation Willard to live in Wethersfield. 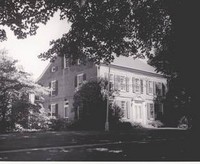