Inventor and businesswoman, Wethersfield’s Sophia Woodhouse (1799-1883) was one of the first female entrepreneurs of the Greater Hartford area. Plying her trade during the early 19th century, Sophia developed an innovative technique for treating, drying, and braiding spear grass to make high quality bonnets. She patented her design in 1821 and quickly developed a cottage industry for her hats, which won awards and acclaim.

Two major historical factors were in Woodhouse’s favor. Embargo acts in the early 19 th century restricted trade between the United States and certain foreign ports. Exotic imports such as fashionable Leghorn hats from Livorno, Italy (the city was known as Leghorn in English) were no longer available. A second factor was a directive from President James Monroe in which he encouraged Americans to become a “nation of manufacturers” and develop new businesses and products.

Nineteen-year-old Woodhouse responded to the president’s call (perhaps indirectly) and was able to fill the American market’s demand for fashionable bonnets by producing grass bonnets made in the Leghorn style. Using the common spear grass that grew in the Wethersfield meadows alongside the Connecticut River, she developed a process in which spear grass was boiled, bleached, moistened, fumigated and then dried to make it suitable for plaiting or braiding to make Leghorn-style bonnets. A clever businesswoman, Woodhouse had her hat-making process patented in 1821 as “a new and useful improvement in the manufacture of grass bonnets and hats.” (Though she shared the patent with her husband, Gurdon Welles, it is Sophia Woodhouse’s name that is closely associated with this extraordinary and innovative local industry of grass bonnet making.)

It was not uncommon for women of that era to braid grass and straw bonnets for their own use as well as selling them to local merchants or hat dealers. But Sophia’s singular success stemmed from the fact that she manufactured a high-quality product: The fineness of her braiding made the caliber of her bonnets unparalleled. She won awards for best “Grass Bonnet” by the Hartford County Society for Promoting Agriculture and Domestic Manufacturers in 1819 and again in 1820. The following year, she was awarded a medal and cash prize from London’s prestigious Society of the Arts. The Society was so impressed with Woodhouse’s technique that they requested a sample of the spear grass used in her unique process.

With her international success, the demand for Woodhouse’s bonnets increased. She employed several women from Wethersfield to manufacture her hats. Although she had a workshop at her house, it is very likely that the women who worked for her did so in their own homes, thus creating a cottage industry of grass bonnet making in Wethersfield. A particularly gifted woman in her employ, Maria Francis, produced 300 bonnets in one summer! 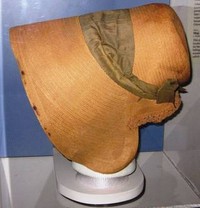 One of the best examples of Woodhouse’s straw bonnets is included in the exhibit, Legendary People, Ordinary Lives, on permanent display at the Wethersfield Museum, 200 Main Street, Wethersfield. For more information call 860-529-7656 or 529-7161 or visit the museum’s Web site at www.wethhist.org.

About the Author: Melissa Josefiak